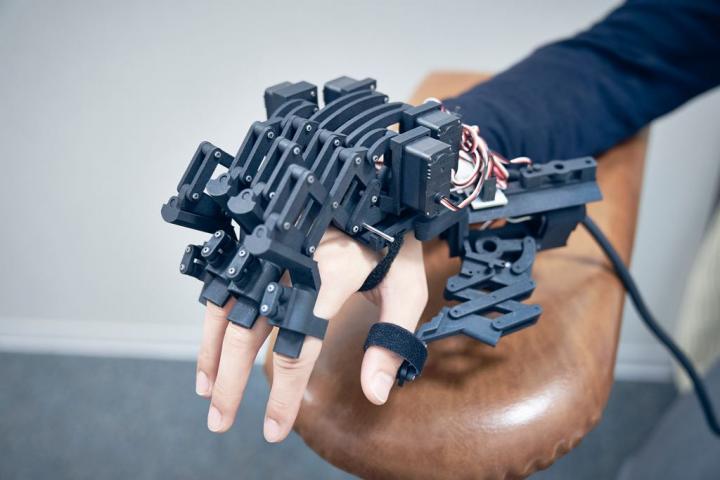 The tactile sensation signaled by the skin and the proprioceptive sensation (deep sensation) signaled by muscles and joints are collectively called somatosensory sensation. It has long been understood that somatosensory information plays an important role in movement control. However, how somatic sensation contributes to production of the skillful movements of pianists has not been elucidated.

The research group developed a system to produce tactile and proprioceptive sensation in the fingers with an electric current stimulator and an exoskeletal robot hand 1) and developed an assessment system that evaluated the processing of each neural information in the cerebral cortex using electroencephalogram measurements and transcranial magnetic stimulation 2). Using this system, expert pianists were found to have altered mechanisms by which tactile and proprioceptive sensation suppress the activity of the primary motor cortex 3) in a specialized manner (somatosensory-motor integration). This neuroplastic adaptation was associated with enhancement of speed and precision of finger movements in pianists.

This finding is expected to be useful in the development of techniques to identify factors necessary for acquiring proficiency in skills such as piano playing, tailor-made training methods that take individual differences into account, diagnostic methods for the early detection of neurological disorders where the function of fingers deteriorates due to excessive training, and in the development of rehabilitation methods.

An attachable device, so called an exoskeleton, that mechanically moves the user’s fingers using a motor.

Stimulation of the cerebral cortex with magnets that penetrate the skull without harming the body. Neural activity generated by stimulating the motor cortex noninvasively is transmitted to muscles, and the excitability of the motor cortex is estimated from the electric potential evoked in the muscle.

The final output layer of the brain that sends motor commands to muscles via the corticospinal tract. Excitation and inhibitory inputs are received from the primary somatosensory cortex (sensorimotor integration).

Hunters of cosmic ray particles come together in CREDO

Scienmag Mar 19, 2019
For the first time, University of Guelph biologists have tracked an annual migration of up to 20,000 kilometers…

Photonics: The curious case of the disappearing cylinders