Fukuoka, Japan—As the world confronts the ongoing climate crisis, moving to greener technology has become a requirement in every facet of our lives. Naturally, industries critical to our daily lives are also moving to integrate such technology into their operations. 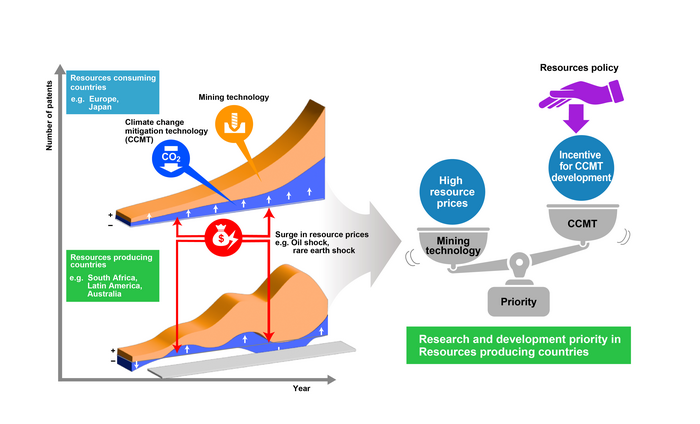 Fukuoka, Japan—As the world confronts the ongoing climate crisis, moving to greener technology has become a requirement in every facet of our lives. Naturally, industries critical to our daily lives are also moving to integrate such technology into their operations.

All of these depend in some way on the industry that extracts and processes the raw materials used to make most green technologies: the mining industry. But the economic and policy factors that drive the mining sector to become more sustainable remain critically understudied.

In a report published in Resources Policy, Hidemichi Fujii from Kyushu University’s Faculty of Economics, Japan, and Andre Yamashita from Luleå University of Technology’s Control Engineering Group, Sweden, analyzed the trends in global patent applications from the mining and minerals sector to reveal strategies for promoting R&D in mining-related climate change mitigation technology, or CCMT.

They found that the development of CCMTs in the industry was influenced by both the Paris Agreement and raw metal price trends, but the degree of influence varies by country and how much the sector contributes to the country’s economy.

“The goal of CCMT development is to reduce greenhouse gas emissions and the impact we have on the environment,” explains Hidemichi Fujii, who led the study. “A good way to analyze how an industry’s technology is developing is to look at patents filed over time. Our team looked at patent data from 2001 to 2016 from seven regions to calculate three major indicators of CCMT development in the industry for each region: Priority, Mining, and Scale.”

The ‘Priority’ indicator is the number of mining-CCMT-related patents divided by the number of patents in the whole mining industry. That ratio would increase if inventors were prioritizing research into CCMTs.

Finally, ‘Scale’ is defined as the total number of patents, representing the overall amount of research and development.

“We used these indicators to analyze the mining industry in seven major countries and regions: China, Japan, USA, Europe, Latin America, Australia, and South Africa. The first four have major patent offices, whereas the latter three are major mining regions,” explains Fujii. “Through our analysis we found several interesting trends.”

For example, while both overall mining patents and mining CCMT patents grew across the board, the rate and pattern of those trends differ if a country is a resource consuming one or producing one. Resource-producing regions exhibited larger changes in R&D priorities in response to surges in prices of resources such as rare earth metals and oil.

Further analysis showed that development of mining CCMT patents in the US, Europe, Latin America, and Australia was facilitated by a relative increase in R&D related to mining technology. Japan and South Africa have increased their focus on R&D for both mining itself and related CCMTs while shrinking the overall scale of their R&D. On the other hand, China and the rest of the world have increased the scale of their R&D, which in turn drives invention of more green technology.

“The year-by-year analysis showed that the Paris Agreement contributed to an overall increase in green technology in the mining sector. Increases in prices of metals contributed to the number of patents for the industry as well,” Fujii states.

The team hopes that their new analysis can help both countries and industries implement effective policies that promote development of CCMTs for the industry and maximize the benefits for all.

“The differences and similarities in R&D strategies can be used as a starting point to formulate country-specific science and technology policies that can combat the climate crisis,” concludes Fujii. “At the same time, they can make the most effective use of capital, and promote regulations that guarantee fair wages based on experience and skill.”

About Kyushu University
Kyushu University is one of Japan’s leading research-oriented institutes of higher education since its founding in 1911. Home to around 19,000 students and 8,000 faculty and staff, Kyushu U’s world-class research centers cover a wide range of study areas and research fields, from the humanities and arts to engineering and medical sciences. Its multiple campuses—including the largest in Japan—are located around Fukuoka City, a coastal metropolis on the southwestern Japanese island of Kyushu that is frequently ranked among the world’s most livable cities and historically known as a gateway to Asia.