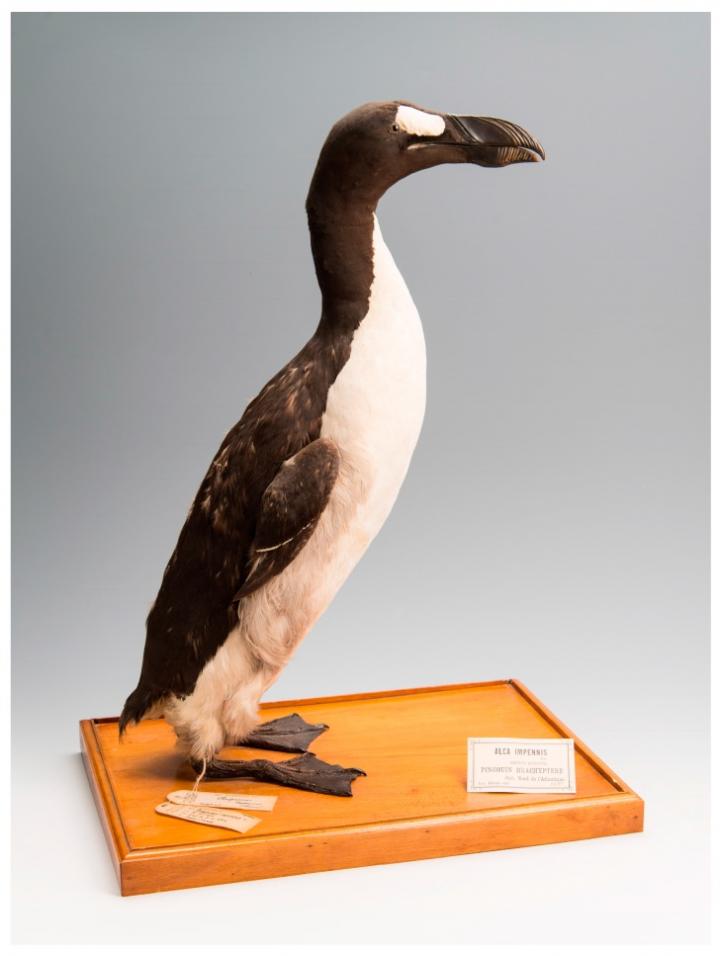 New insight on the extinction history of a flightless seabird that vanished from the shores of the North Atlantic during the 19th century has been published today in eLife.

The findings suggest that intense hunting by humans could have caused the rapid extinction of the great auk, showing how even species that exist in large and widespread populations can be vulnerable to exploitation.

Great auks were large, flightless diving birds thought to have existed in the millions. They were distributed around the North Atlantic, with breeding colonies along the east coast of North America and especially on the islands off Newfoundland. They could also be found on islands off the coasts of Iceland and Scotland, as well as throughout Scandinavia.

But these birds had a long history of being hunted by humans. They were poached for their meat and eggs during prehistoric times, and this activity was further intensified in 1500 AD by European seamen visiting the fishing grounds of Newfoundland. Their feathers later became highly sought after in the 1700s, contributing further to their demise.

“Despite the well-documented history of exploitation since the 16th century, it is unclear whether hunting alone could have been responsible for the species’ extinction, or whether the birds were already in decline due to natural environmental changes,” says lead author Jessica Thomas, who completed the work as part of her PhD studies at Bangor University, UK, and the University of Copenhagen, Denmark, and is now a postdoctoral researcher at Swansea University, Wales, UK.

To investigate this further, Thomas and her collaborators carried out combined analyses of ancient genetic data, GPS-based ocean current data, and population viability – a process that looks at the probability of a population going extinct within a given number of years. They sequenced complete mitochondrial genomes of 41 individuals from across the species’ geographic range and used their analyses to reconstruct the birds’ population structure and dynamics throughout the Holocene period, the last 11,700 years of Earth’s history.

“Taken together, our data don’t suggest that great auks were at risk of extinction prior to intensive human hunting behaviour in the early 16th century,” explains co-senior author Thomas Gilbert, Professor of Evolutionary Genomics at the University of Copenhagen. “But critically, this doesn’t mean that we’ve provided solid evidence that humans alone were the cause of great auk extinction. What we have demonstrated is that human hunting pressure was likely to have caused extinction even if the birds weren’t already under threat from environmental changes.”

Gilbert adds that their conclusions are limited by a couple of factors. The mitochondrial genome represents only a single genetic marker and, due to limited sample preservation and availability, the study sample size of 41 is relatively small for population genetic analyses.

“Despite these limitations, the findings help reveal how industrial-scale commercial exploitation of natural resources have the potential to drive an abundant, wide-ranging and genetically diverse species to extinction within a short period of time,” says collaborator Gary Carvalho, Professor in Zoology (Molecular Ecology) at Bangor University. This echoes the conclusions of a previous study* on the passenger pigeon, a bird that existed in significant numbers before going extinct in the early 20th century.

eLife is a non-profit organisation inspired by research funders and led by scientists. Our mission is to help scientists accelerate discovery by operating a platform for research communication that encourages and recognises the most responsible behaviours in science. We publish important research in all areas of the life and biomedical sciences, including Evolutionary Biology and Genetics and Genomics, which is selected and evaluated by working scientists and made freely available online without delay. eLife also invests in innovation through open-source tool development to accelerate research communication and discovery. Our work is guided by the communities we serve. eLife is supported by the Howard Hughes Medical Institute, the Max Planck Society, the Wellcome Trust and the Knut and Alice Wallenberg Foundation. Learn more at eLifesciences.org”>https://eLifesciences.org.