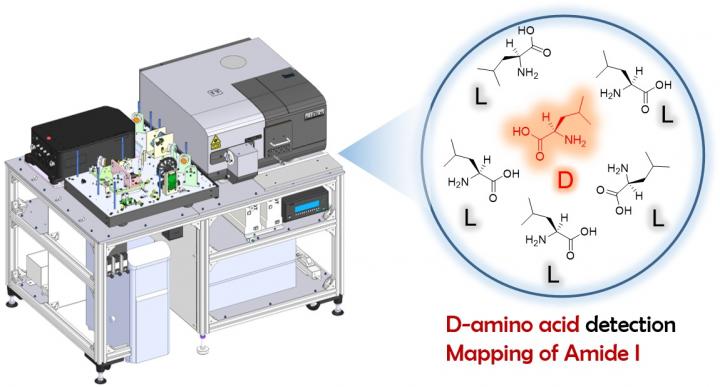 Currently, the roles of free D-amino acids and D-amino acid residues in proteins are garnering extensive attention in biological fields such as molecular biology, physiology, microbiology, and pathophysiology. Because it is crucial to analyze these materials rapidly and accurately, many methods have been employed. However, samples for measurement are currently limited to solutions containing target molecules in the pure form. Hence, there is need for an analytical method for the in situ measurement of biological samples placed on a solid support.

We report the construction of a multidimensional vibrational circular dichroism spectroscopy (MutilD-VCD) for dipeptides and amino acids with D-amino acid residues in amides I and II regions. It was a challenging goal because of the disturbance of the bending vibration of water. VCD spectroscopy is a chiroptical spectroscopy with unique characteristics. In the present study, a quantum cascade laser (QCL) was installed as an infrared source to achieve high intensity and narrow focusing. A MultiD-VCD system with three coordinates (wavenumber, VCD intensity, and position) was developed. The instrument was switchable to a concurrent FT-VCD (Fourier Transform Vibrational Circular Dichroism) system. A scanning device was installed to move an attached motorized stage in two dimensions.

Results indicated that the instrument could obtain the VCD spectrum of dipeptides, including D-amino acid, in an aqueous solution under interference caused by a water medium. Moreover, it achieved the two-dimensional patterning of the distribution and discrimination of chiral components (L-Ala and D-Ser) within a KBr pellet. Our final goal is to identify the location of D-amino acid residue in the aggregates of proteins, such as amyloids, and to clarify how the chiral inversion of a single amino acid residue in a protein affects its biological functions. An improved spatial resolution may benefit the basic fields of analytical and medical sciences as well as the practical field of chiral component analysis in drugs in the future.