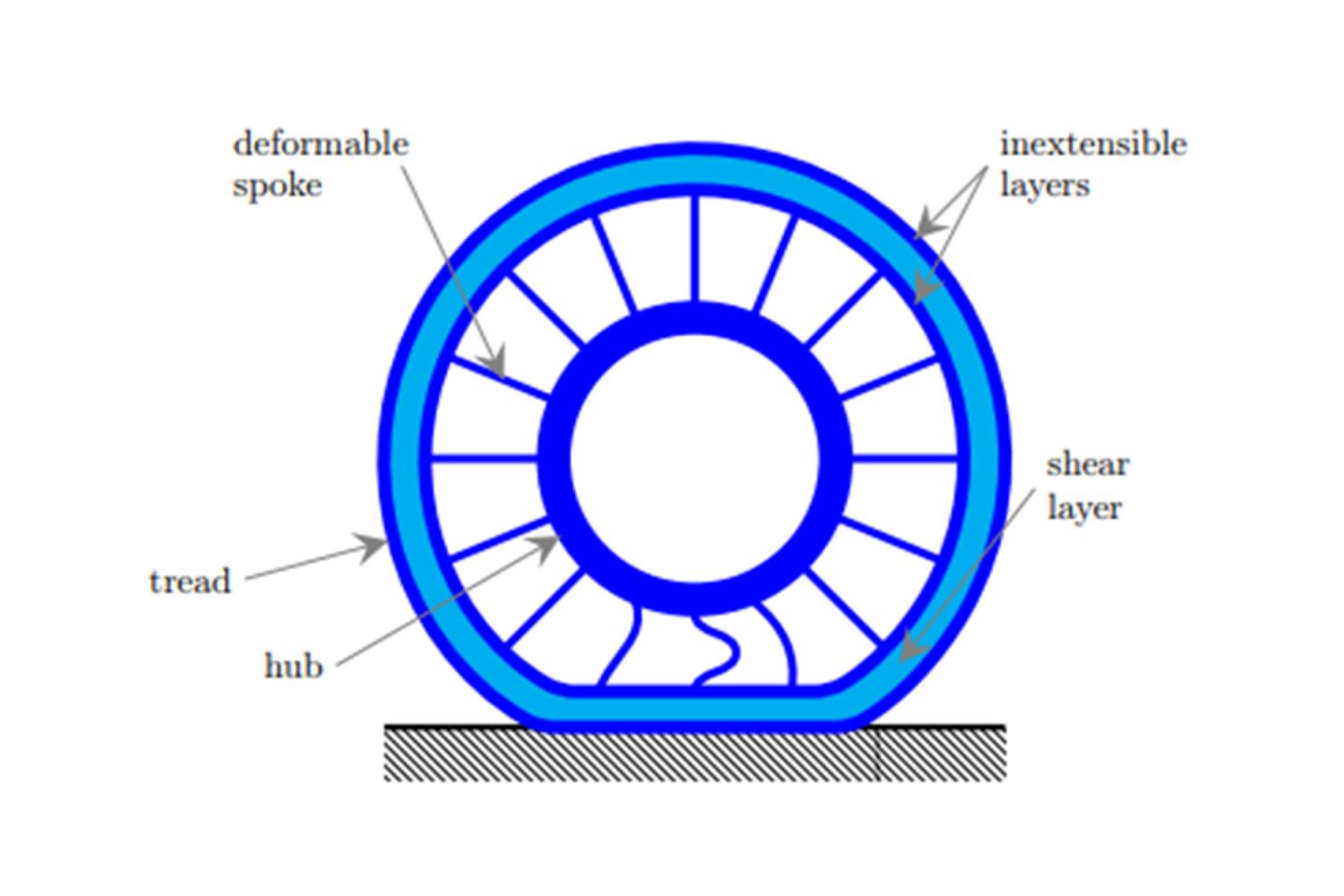 Some golf carts and lawnmowers already use airless tires and at least one major tire company produces a non-pneumatic automotive tire, but we still have long way to go before they are on every vehicle that comes off the assembly line. Finding a design that balances puncture-free strength with the elasticity needed for a comfortable, shock-free ride like conventional pneumatic tires is the key.

To address some of the issues, University of Illinois researchers focused on one component of the tire–the shear layer, which is just beneath the tread.

“The shear layer is where you get the most bang for your buck from a design perspective. It’s where you have the most freedom to explore new and unique design configurations,” said Kai James, assistant professor in the Department of Aerospace Engineering at U of I.

James along with U of I graduate student Yeshern Maharaj used design optimization, a computer algorithm, to come up with a variety of structural patterns for the shear layer of a non-pneumatic tire.

They had a computer simulation that modeled the elastic response on the shear layer. The simulation calculates the material’s ability to stretch and twist.

“We were looking for a high level of shear–that is, how much strain the material can take under pressure–but we want stiffness in the axial direction,” James said.

These physical pressures are not like aging or weathering on the tire, but about internal pressure and stresses–essentially, how much pressure the material exerts on itself.

“Beyond a certain level of stress, the material is going to fail,” James said. “So we incorporate stress constraints, ensuring that whatever the design happens to be, the stress doesn’t exceed the limit of the design material.

“There are also buckling constraints. If you have a narrow, slender member, say a strut within the element, that’s undergoing compression that could be subject to buckling. We have ways to mathematically predict what force level is going to induce buckling in the structure and modify it accordingly. Depending on how you weight each of the design requirements–buckling, stress, stiffness, shear, and every combination of those–will result in a different design.”

The goal is a tire design that can withstand pressure but is also elastic to provide a ride that doesn’t feel like you’re driving on tires made of steel.

James explained how, as the computer simulation works to find the optimum pattern, it eliminates structural patterns that are not optimal. It begins with a computer-simulated block of the bulk material that the tire will be made from. Because a solid block doesn’t have much elasticity, the material is virtually cut away, leaving spaces for flexibility.

“If you carve holes in the material until it is something like a checkerboard pattern, with half of the material, you’d also have half of the original stiffness,” he said. “Now, if you do a much more complicated pattern, you can actually tailor the stiffness.”

Obviously, on a continuum from a block of material to a thin, lacelike pattern, the number of potential designs is infinite, but it’s not realistic to test every design. And, it’s important to note that the algorithm doesn’t end by spitting out a single, optimal design.

“Search algorithms have clever ways to strategically search the design space so that ultimately you end up having to test as few different designs as possible,” James said. “Then, as you test the designs, gradually, each new design is an improvement on the previous one and eventually, a design that is near optimal.”

James said computer modeling of a structure like this one, or any physical system has levels of complexity encoded into the model–a higher accuracy model with higher fidelity is more costly.

“From a computational standpoint, we’re generally talking about the time it takes to run the analysis on high-powered computers,” James said.

Future analysis will require an industry or research collaborator.

The study, “Metamaterial topology optimization of non-pneumatic tires with stress and buckling constraints,” is written by Yeshern Maharaj and Kai James. It is published in the International Journal for Numerical Methods in Engineering. https://doi.org/10.1002/nme.6273

Scienmag Jul 8, 2019
Higher income households adopted healthier spending patterns, but lower-income families did not, according to a new…