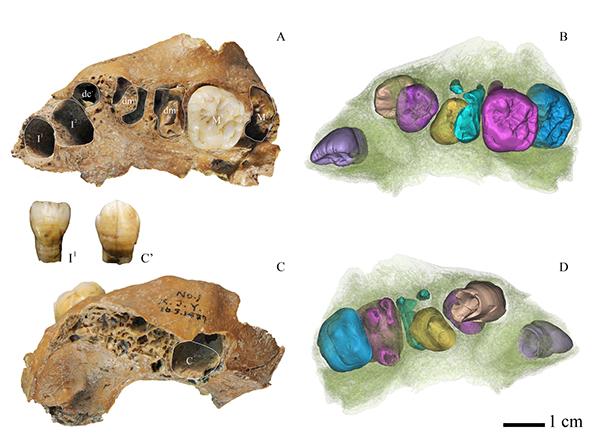 Most aspects of dental development for a juvenile Homo specimen from the Pleistocene fall within the modern human range, according to research by a group of Chinese and international scientists. The study was recently published in Science Advances.

The results are useful in helping to identify when modern human-like growth and development first appeared.

The research was conducted by XING Song from the Institute of Vertebrate Paleontology and Paleoanthropology (IVPP) of the Chinese Academy of Sciences in collaboration with colleagues from France, the U.S., Spain and South Africa. The scientists used advanced synchrotron microtomography to analyze a juvenile Homo dental fossil from the Middle-Late Pleistocene transition. The fossil is estimated to be ~104,000-248,000 years old, based on different dating techniques.

Compared to other primates, modern humans take a long time to develop physiologically, which is associated with characteristics including prolonged childhood dependency, delayed age at first reproduction and long lifespan. Overall, modern humans “live slow and die old.” Understanding when and in which earlier hominins modern human-like growth and development (or life history) first appeared is a subject of ongoing investigation and of strong interest.

Teeth, one of the most abundant materials within fossil collections, are irreplaceable in tracing human life history due to their special features. First of all, their growth is rhythmic and recorded as daily (short-period) as well as longer-period incremental lines in hard tissues that can be imaged non-destructively, thus preserving precious fossils. Secondly, several dental developmental traits (e.g., prolonged crown formation times and delayed molar eruption ages) are typical of modern humans and associated with their prolonged life histories.

According to previous studies, earlier hominins were quite variable in their developmental rates. However, none of them displayed the prolonged periods of dental growth and development that characterize modern humans.

H. erectus also had an accelerated pace of dental growth. Some aspects of Neanderthal dental development appear to be encompassed within the modern human range of variation, although these aspects generally fall at the advanced end of that range. What was archaic Homo (sometimes referred to as archaic H. sapiens) like in terms of dental development? Archaic H. sapiens was proposed to be a transitional form connecting H. erectus and modern humans.

Northern China’s Xujiayao site fortunately produced a juvenile maxilla of archaic Homo that could help answer this question. At death, the child’s first molars had only recently erupted; incisors, canines, premolars and second molars were still buried inside the jaw.

A direct U-series dating of associated mammal teeth suggests that the juvenile hominin lived 104,000-years ago. However, the deposits containing the Xujiayao fossils date to 148,000-248,000 years before present (B.P.), based on optically stimulated luminescence (OSL). This range corresponds to the transition from the Middle Pleistocene to the Late Pleistocene, a very critical time for the origin of H. sapiens.

At the Xujiayao site, three systematic excavations were carried out in the 1970s and 20 hominin fossils were unearthed, including cranial and mandibular fragments as well as isolated teeth. The juvenile maxilla, numbered “Xujiayao 1” among the hominin fossils, was recovered in 1976. A series of comprehensive studies performed in the past few years on the Xujiayao hominin fossils have consistently revealed a complex mosaic of morphologies, including characteristics found in H. erectus, modern humans and Neanderthals.

To assess various features of dental growth and development, the permanent teeth of the Xujiayao juvenile were scanned at the European Synchrotron Radiation Facility (ESRF) in France by Paul Tafforeau. With this high-resolution and non-destructive virtual histology, researchers were able to trace the short-period and long-period incremental lines without physically sectioning the valuable fossil teeth.

After comparing these developmental variables with those of extinct and extant human samples, most aspects of the Xujiayao teeth were found to fall within the range of variation of modern humans, except for a relatively fast average extension rate of the roots.

In particular, the Xujiayao juvenile has a prolonged crown formation time, delayed first molar eruption time, and more perikymata within the cervical half of the crown.

This work is the first systematic assessment of dental growth and development in an archaic Hominin (genus, Homo) from East Asia. Its findings suggest that a slow life history comparable to that of modern humans might have appeared prior to fully modern human morphology.

Scienmag Sep 10, 2019
Credit: International Ocean Discovery Program When the asteroid that wiped out the dinosaurs…

Technologies and scientific advances needed to track methane levels in…