Astronomers studying stellar nurseries, the birthplace of stars in our galaxy, have found that nearly half the stars in the Galaxy are formed in binary/multiple stellar systems (think twins, triplets, quadruplets). 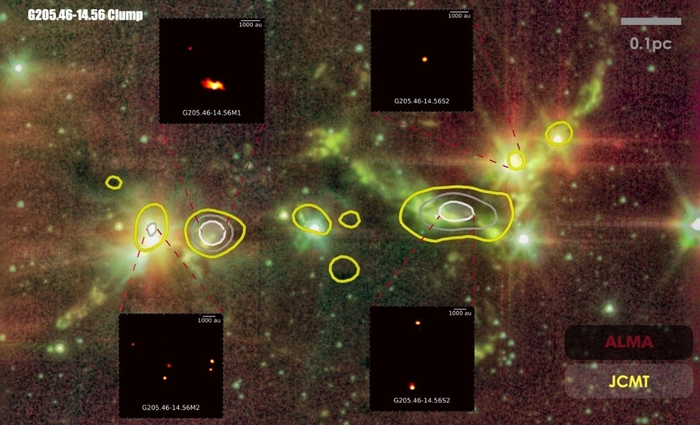 Astronomers studying stellar nurseries, the birthplace of stars in our galaxy, have found that nearly half the stars in the Galaxy are formed in binary/multiple stellar systems (think twins, triplets, quadruplets).

Despite the prevalence of binary/multiple births, previous studies of stellar nurseries have concentrated more on how single stars form. As a result, the origin of binary/multiple stellar systems has long been a mystery to astronomers.

Now, however, an international team led by researchers from the Shanghai Astronomical Observatory (SHAO) of the Chinese Academy of Sciences (CAS) has revealed that denser and more turbulent environments tend to form multiple stars.

The study was published in The Astrophysical Journal.

The birth of any star requires the gravitational collapse of cold dense pockets of gas and dust (known as cores) found in what are known as molecular clouds. However, previous investigations have rarely addressed how the properties of these dense cores affect stellar multiplicity.

In this study, the researchers used the James Clerk Maxwell Telescope (JCMT) in Hawaii and the Atacama Large Millimeter/submillimeter Array (ALMA) in Chile to look at the Orion Cloud complex, which is the closest active star formation region to Earth. Located about 1,500 light-years away in the Orion constellation, this stellar nursery is an ideal laboratory for testing various models of star formation.

Using the JCMT telescope, the scientists identified 49 cold, dense cores in the Orion clouds that are in the process of forming young stars. They then used ALMA to unveil the internal structures within these dense cores.

Based on high-resolution ALMA observations, the researchers found that about 13 dense cores are giving birth to binary/multiple stars, while the other cores are only forming single stars. They subsequently estimated the physical characteristics (e.g., size, gas density, and mass) of these dense cores from the JCMT observations.

Surprisingly, they found that cores forming binary/multiple stars tend to show greater H2 gas density and mass than those forming single stars, although the sizes of various cores showed little difference. “Denser cores are much easier to fragment due to the perturbations caused by self-gravity inside molecular cores,” said LUO Qiuyi, a Ph.D. student from SHAO and first author of the study.

The team also observed the 49 cores in the N2H+ (J=1-0) molecular line using the Nobeyama 45-meter telescope. They found that N2H+ line widths for cores forming binary/multiple stars are statistically larger than those of cores forming single stars. “These Nobeyama observations provide a good measurement of turbulence levels in dense cores. Our findings indicate that binary/multiple stars tend to form in more turbulent cores,” said Prof. Ken’ichi Tatematsu, who lead the Nobeyama observations.

“In a word, we found that binary/multiple stars tend to form in denser and more turbulent molecular cores in this study,” said LUO.

“JCMT has proven to be a great tool for uncovering these stellar nurseries for ALMA follow-up. With ALMA providing unprecedented sensitivity and resolution, we can do similar studies on a much larger sample of dense cores for a more thorough understanding of star formation,” said LIU Sheng-Yuan, co-author of the study.

“As for future work, we have yet to look at the effect of magnetic fields in our analysis. Magnetic fields may suppress the fragmentation in dense cores. So, we are excited to focus the next stage of our research on this area using JCMT and ALMA,” said LIU Tie, corresponding author of the study and lead for the ALMA data.