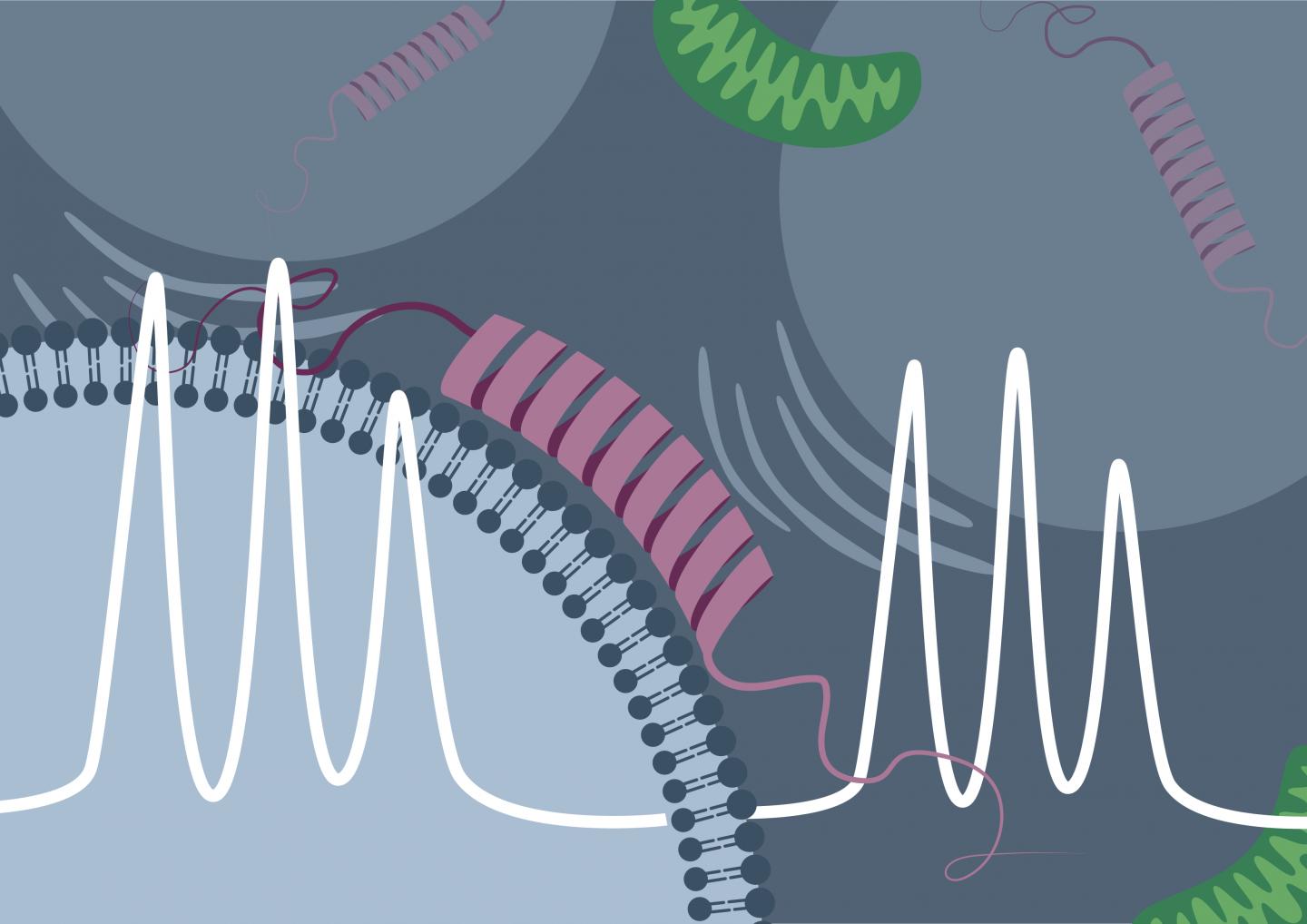 The protein α-synuclein is one of the most abundant proteins in the human brain. It is often referred to as the “Parkinson protein”, as deposition of this protein in brain cells is a hallmark of Parkinson’s disease. Despite the high interest of biomedical research in the protein, many questions concerning the function and physiology of α-synuclein in living cells still remain to be answered. For example, it was previously unclear whether and to what extent the protein binds to and interacts with internal cell components such as membranes. As such processes could play a role in the development of the disease, the team led by Konstanz-based physical chemist Professor Malte Drescher used the further development of an established measurement method called “electron paramagnetic resonance spectroscopy” (EPR spectroscopy) to learn more about the binding properties of the “Parkinson protein”. The study, published in the scientific periodical “The Journal of Physical Chemistry Letters”, furnishes proof of concept that the advanced method is fundamentally suitable for elucidating protein-lipid interactions in cells. Furthermore, this first practical test yielded direct evidence of the binding of α-synuclein to intracellular membranes.

Slower is not always more thorough

The advanced version of EPR spectroscopy, in the current study used for the first time in practice, is called rapid-scan EPR spectroscopy. In both methods, the conventional and the advanced, the proteins to be studied are first fitted with so-called spin probes. These chemical probes make it possible to detect changes in protein structure. Spin probes each have a free electron whose spin is excited by irradiation with microwaves. “We can imagine spins as small compass needles that are influenced by microwave irradiation during the measurement,” Drescher explains. In conventional EPR spectroscopy, for each group of excited spins it is necessary to wait until this influence decays before the group can be excited again. This relatively time-consuming process must be repeated over many passes to achieve the complete measurement.

With rapid-scan EPR spectroscopy, by contrast, it is no longer necessary to wait until the influence on a spin group abates before continuing the measurement. “Instead, you rush the influence spectrally from spin group to spin group and then return to the first group at the very moment when its excitation has just subsided,” says Drescher. On the one hand, this procedure shortens the required measurement time, while on the other it allows application of higher microwave power, leading to improved accuracy of the method. The researchers have made use of both of these advantages in their current study on the binding behaviour of α-synuclein.

The new method in practice

From previous studies conducted in vitro (“in the test tube”) it was already known that the “Parkinson protein” α-synuclein can attach itself to electrically negatively charged lipid membranes. In EPR spectroscopy, this binding process is accompanied by a characteristic change in the measured signal. “The initially disordered α-synuclein assumes an ordered form upon binding to the membrane. This reduces the mobility of the spin probe, and the binding of the protein can be directly detected by the measurement method,” explains Theresa Braun, doctoral student in Drescher’s research team and, jointly with Juliane Stehle, lead author of the study.

Using synthetic, negatively charged membrane vesicles and purified α-synuclein, Drescher and his colleagues were able to detect the same signal change in rapid-scan EPR spectroscopy. However, they succeeded not only in vitro, but also inside cells of the African clawed frog (Xenopus laevis), into which first the artificial membrane vesicles were introduced and, a short time later, the protein was. The research team then carried out time-dependent measurements and was able to directly observe, based on the change in the measurement signal, how the proportion of the protein bound in the cell increased over time.

A comparable – albeit significantly weaker – increase in the amount of bound α-synuclein over time was also seen when no artificial membranes were introduced into the cell. Thus, according to Drescher, only one explanation remained for this crucial observation. “This is the first time that we see direct evidence that α-synuclein interacts with the endogenous, i.e. naturally existing lipid membranes as well,” the scientist concludes. Due to the comparatively small size of the effect, in experiments with less precise measurement methods this had previously remained hidden.

From frog to human

In future studies, Malte Drescher’s team plans to build on this result and further elucidate the process of intracellular binding of α-synuclein to natural cell components, in order to learn more about the function of the protein. An important step in this process will be the move from frog cells as a model system to various mammalian cell types. The long-term goal is to better understand the protein-lipid interactions of the “Parkinson protein” and its role in the development of Parkinson’s disease in order to be able to develop suitable therapeutic approaches.

The research work took place within the framework of the Konstanz Collaborative Research Centre 969 “Chemical and biological principles of cellular proteostasis” and received additional funding from the “Horizon 2020” framework programme of the European Union.