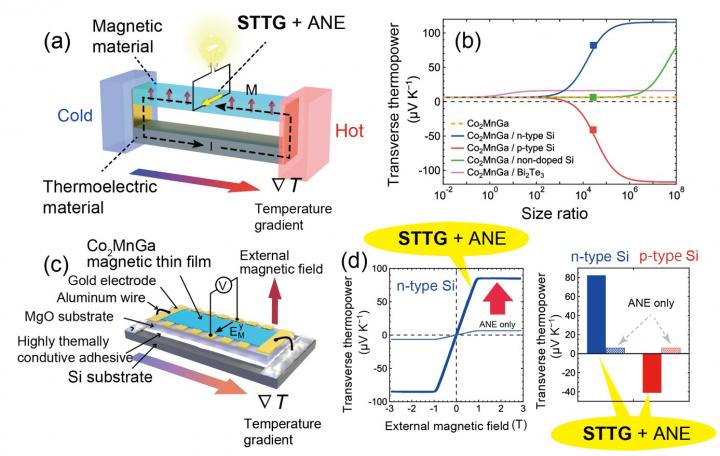 A NIMS research team devised a new thermoelectric generation mechanism with a hybrid structure composed of thermoelectric and magnetic materials. The team then actually fabricated this structure and observed the record-high thermopower appearing in the direction perpendicular to a temperature gradient (i.e., transverse thermoelectric generation). These results may offer insights into new mechanisms and structural designs applicable to the development of versatile energy harvesting technologies and highly sensitive heat flux sensors.

In this research project, the research team devised and demonstrated a new thermoelectric generation mechanism in which a longitudinal thermopower induced by the Seebeck effect in a thermoelectric material can be converted into a transverse thermopower in a magnetic material via the anomalous Hall effect. The team then simulated this mechanism based on phenomenological model calculations and found it potentially capable of generating very high thermopower beyond 100 μV/K perpendicular to the direction of a temperature gradient when materials and structures are optimized. To experimentally verify this result, the team fabricated a hybrid structure composed of Co2MnGa?a magnetic compound capable of producing the large anomalous Hall effect?and semiconducting Si capable of producing the large Seebeck effect. This structure generated the record-high positive and negative transverse thermopowers (+82 μV/K and -41 μV/K). The magnitude and sign of the measured thermopowers are well reproduced by the prediction based on the model calculations. The thermoelectric generation capability of the composite can further be improved by material and structural optimization.

The thermopower observed in this project was more than 10 times larger than the previously recorded highest thermopower generated by the anomalous Nernst effect. This result is expected to significantly advance R&D efforts aiming to put transverse thermoelectric generation into practical use. In future studies, we plan to research and develop effective magnetic and thermoelectric materials, create composite structures using these materials, and optimize their structures. We will then use these hybrid materials to develop energy harvesting technologies capable of powering IoT devices and heat flux sensors that can be used for energy-saving purposes.