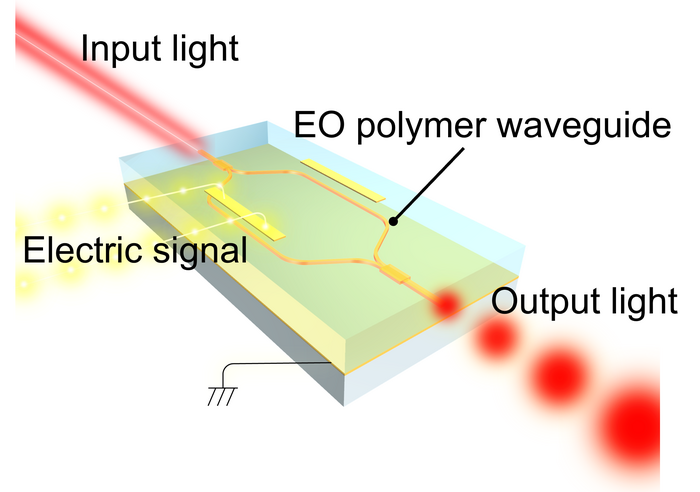 This EO polymer optical modulator for visible light is expected to be applied to next generation display devices such as stereoscopic displays and smart glasses.

This achievement was published in the scientific journal “Optics Express” on May 19, 2022.

NICT designed and fabricated a Mach-Zehnder interferometer structure using microfabrication process (see Figure1). The waveguide size for operating at visible light is necessary to be small than conventional optical modulator for near-infrared light. We have adopted a ridge type waveguide (see Figure 2) which guarantees a single mode even if the width of the waveguide is relatively large. As a result, although high accuracy processing is required, the fabrication tolerance relaxed.

An electric signal was added to the developed optical modulator, and the modulation operation was evaluated. As a result, the figure of merit of optical modulators was 0.52 Vcm at a wavelength 640 nm (red color). This result is less than one-third of the traditional figure of merit which means extremely efficient (small size and low driving voltage). Furthermore, the operating wavelength is significantly shorter than before (see Figure 3).

This research result of highly efficient optical modulator for visible light is pioneering achievement that bring about innovations in light beam control and display technology. The optical modulator which can control the phase of propagation light can be used for an optical phased array which is a beam steering device. The optical phased array for visible light can be available for stereoscopic displays. Compact and highly efficient display devices can be expected to be mounted in next-generation wearable terminals such as smart glasses. Furthermore, a low-cost silicon-based photodetector can be used at visible light, which leads to cost reduction of the entire system.

“I will continue to promote research and development of the optical phased array for next-generation display” said KAMADA Shun. We will also aim to develop EO polymers for green and blue other than red, and expand their applications to full color stereoscopic displays.