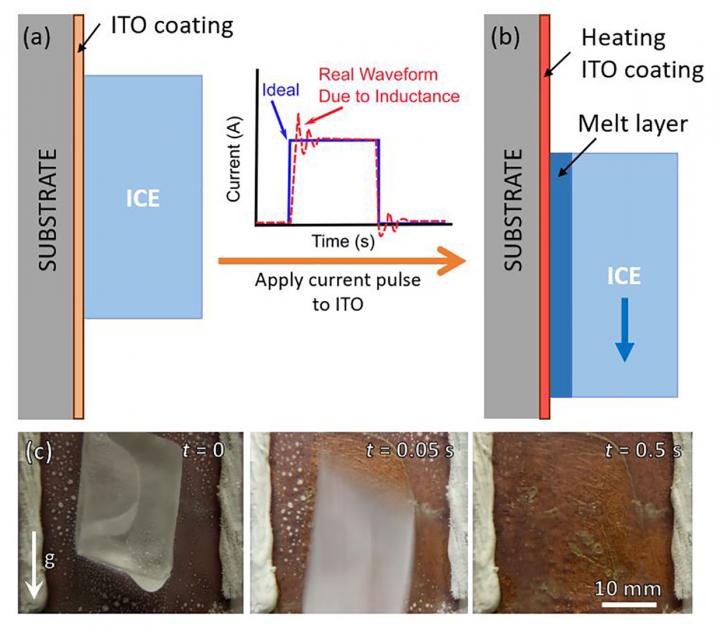 A group of researchers at the University of Illinois at Urbana-Champaign and Kyushu University has developed a way to remove ice and frost from surfaces extremely efficiently, using less than 1% of the energy and less than 0.01% of the time needed for traditional defrosting methods.

The group describes the method in Applied Physics Letters, from AIP Publishing. Instead of conventional defrosting, which melts all the ice or frost from the top layer down, the researchers established a technique that melts the ice where the surface and the ice meet, so the ice can simply slide off.

“The work was motivated by the large energy efficiency losses of building energy systems and refrigeration systems due to the need to do intermittent defrosting. The systems must be shut down, the working fluid is heated up, then it needs to be cooled down again,” said author Nenad Miljkovic, at UIUC. “This eats up a lot of energy when you think of the yearly operational costs of running intermittent defrosting cycles.”

According to the authors, the biggest source of inefficiency in conventional systems is that much of the energy used for de-icing goes into heating other components of the system rather than directly heating the frost or ice. This increases energy consumption and system downtime.

Instead, the researchers proposed delivering a pulse of very high current where the ice and the surface meet to create a layer of water. To ensure the pulse reaches the intended space rather than melting the exposed ice, the researchers apply a thin coating of indium tin oxide (ITO) — a conductive film often used for defrosting — to the surface of the material. Then, they leave the rest to gravity.

To test this, the scientists defrosted a small glass surface cooled to minus 15.1 degrees Celsius — about as cold as the warmest parts of Antarctica — and to minus 71 degrees Celsius — colder than the coldest parts of Antarctica. These temperatures were chosen to model heating, ventilation, air conditioning and refrigeration applications and aerospace applications, respectively. In all tests, the ice was removed with a pulse lasting less than one second.

In a real, 3D system, gravity would be assisted by air flow. “At scale, it all depends on the geometry,” Miljkovic said. “However, the efficiency of this approach should definitely still be much better than conventional approaches.”

The group hasn’t studied more complicated surfaces like airplanes yet, but they think it’s an obvious future step.

“They are a natural extension as they travel fast, so the shear forces on the ice are large, meaning only a very thin layer at the interface needs to be melted in order to remove the ice,” Miljkovic said. “Work would be needed to figure out how we can coat curved components conformally with the ITO and to figure out how much energy we would need.”

The researchers hope to work with external companies on scaling up their approach for commercialization.

Solar technology breakthrough at the University of Queensland

Chemists use mass spectrometry tools to determine age of fingerprints

An early warning system for damage in composite materials

First book on the Timoshenko-Ehrenfest beam theory in 100 years