Defects at the spinterface disrupt transmission 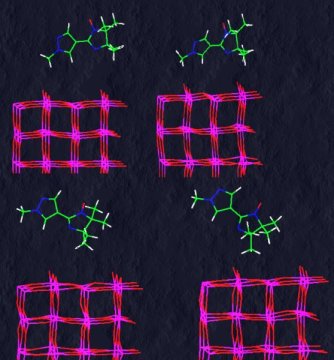 Magnets made of organic materials have a number of advantages over the classic metal or alloy magnets. They are chemically more flexible, cheaper to make, and can be better adapted to various purposes and varying designs. In practice, researchers want to apply both types of magnets in electronics — in spintronic elements, which transport information not by electrical load but via the spin of the component molecules. This intrinsic angular momentum is a typical characteristic of particles, such as electrons. Reza Kakavandi, Professor Thomas Chassé and Dr. Benedetta Casu of the Institute of Physical Chemistry at the University of Tübingen have investigated just such a magnetic interface between the titanium oxide crystals in rutile form and a purely organic magnet. They found that the transition area where the materials met was highly sensitive to minimal defects in the surfaces. The results of their study have been published in the latest Nano Research.

Purely organic radicals are composed of light elements such as carbon, nitrogen and oxygen, and usually have one unpaired electron, which creates permanent magnetic momentum. "They are interesting in a whole lot of applications;" says Benedetta Casu, "They can be used particularly in storage elements, batteries, sensors and for biomedical applications. They could also be used in the construction of a quantum computer." The Tübingen researchers investigated the interface between a single rutile crystal and an organic radical using a very high resolution x-ray spectroscopy procedure combined with theoretical calculations by Dr. Arrigo Calzolari of the Istituto Nanoscienze in Modena, Italy. The researchers call this link between conventional and organic magnets the "spinterface" because it combines the ideas of "spin" and "interface."

"In this experiment, organic radicals are held in place physically, and the magnetic momentum was kept between the different materials," says Benedetta Casu. She says it worked well. But, she says, the situation changed completely when there was a tiny defect on the relevant surface of the rutile — i.e., if the crystal surfaces were not ideally ordered. "In that case, the organic radical bonded chemically with the reactive point of the defect, wiping out the magnetic momentum," Casu explains.

This approach with the combination of x-ray spectroscopy and theoretical calculations proved to be very useful in helping the researchers to understand the mechanisms at this complex interface, according to Casu. The researchers needed to describe both the electrical charges involved as well as the spin. For the first time it became clear what important influences arise from surface defects at one of these spinterfaces. "It's a key result, equally valid in chemistry and in physics as well as for materials sciences," says Casu.

The above post is reprinted from materials provided by Universitaet Tübingen. Note: Content may be edited for style and length.