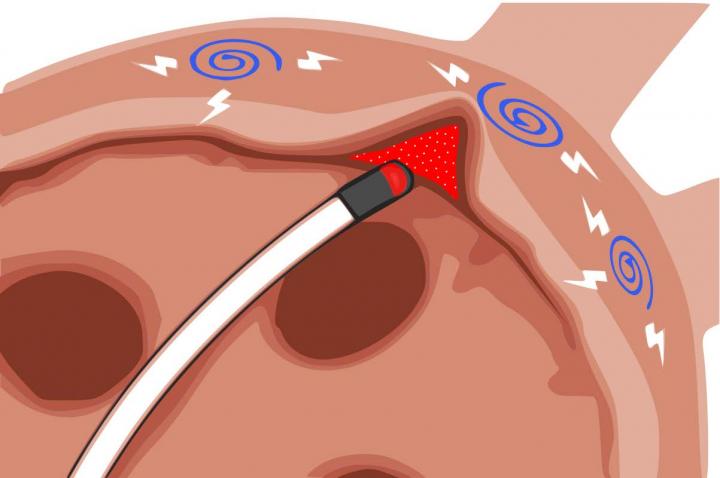 Researchers at Imperial have shown how the chaotic electrical signals underlying irregular heart rhythms lead to the failure of standard treatments.

By modelling how electrical signals on the inside and the outside of the heart move across the muscle, researchers at Imperial College London have suggested why corrective surgery is not currently always beneficial.

The insight could improve surgery for some, by better targeting areas of the heart responsible, and could avoid unnecessary surgery for others, where intervention is unlikely to help.

Atrial fibrillation (AF) is the most common heart rhythm abnormality and is projected to affect about two percent of the global population by 2050. It is the leading cause of stroke, but treatment options are limited.

The current most common treatment is a surgery to burn areas of the heart from the inside thought to be responsible for the irregularity. However, the surgery, known as catheter ablation, is only effective in about 50 percent of patients.

Clinicians in the US recently observed that AF is associated with different patterns of electrical pulses on the inside and the outside the heart, which were previously thought to be incompatible.

Now, a team of physicists and cardiologists at Imperial have developed a model of AF that explains how these differing patterns arise and what causes them. The model can further be used to explain why some patients do not benefit from AF surgery.

For example, the model predicts that the current method of burning the heart from the inside might fail if the sources underlying AF originate on the outside of the heart. For these patients, surgery could be optimised to increase the chances of being successful and reducing symptoms.

The model also predicts that for some patients, the heart muscle is so damaged that regardless of how often the source of AF is destroyed, a new location will always emerge that disrupts the regular rhythm.

For these patients, surgery is likely to be an unnecessary risk, as well as being costly for the healthcare system. The team say new treatments should be developed for these patients.

The team’s model is currently based on theories in physics, which match well with observations of electrical pulses from earlier studies.

They are now beginning to work with real data from patients undergoing treatment to pinpoint where in the heart to target using current surgical techniques. This could increase the success rate of current techniques and reduce the time needed for each patient to undergo surgery.

Lead author Max Falkenberg, a PhD student in the Department of Physics at Imperial, said: “Our model helps explain why many patients have unsuccessful surgery, and associates this failure with a number of risk factors such as obesity. We hope that with further development, the model could help us determine for which patients surgery is an unnecessary risk, and which would benefit from surgery if the right regions of the heart are targeted.”

Professor Kim Christensen, who supervised the project, said: “Atrial fibrillation is a fascinating example of how a natural complex phenomenon might actually have a relatively simple origin. A long-standing collaboration between physicists and cardiologists at Imperial has managed to overcome persistent barriers to bridging the disciplines and we are now reaping the fruits of that endeavour.

“We are truly excited about the future potential clinical applications of our findings for personalised treatment of atrial fibrillation.”

The research, published today in the journal Physical Review E, is a collaboration between researchers from Imperial’s Centre for Complexity Science, and the Centre for Cardiac Engineering.