Two dense, city-sized stars collided in a galaxy far, far away; the resulting X-rays give UNLV’s Bing Zhang and international team of astronomers a new way to spot when it happens and a rare glimpse into how neutron stars form 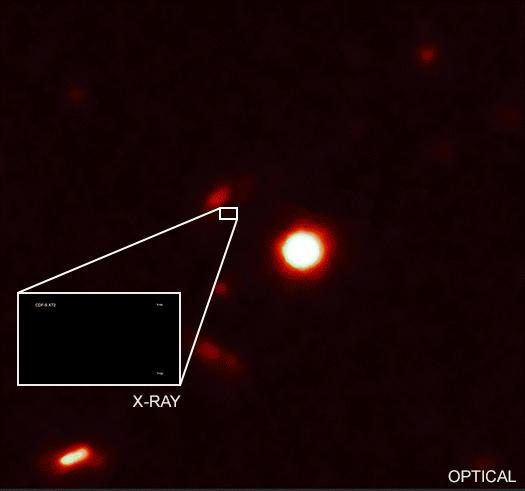 An international team of astronomers, including faculty and alumni from UNLV, has discovered a new way to spot when collisions occur in distant galaxies between two neutron stars – incredibly dense, city-sized celestial bodies that possess the most powerful magnetic fields in the universe.

A bright burst of X-rays captured by NASA’s Chandra X-ray Observatory in a galaxy located 6.6 billion light years from Earth likely signaled the merger of two neutron stars into a new, heavier and freakishly magnetic neutron star – known as a magnetar – and offered astronomers a rare glimpse into how neutron stars are made. The team’s findings were published in the April 11 issue of the journal Nature.

When neutron stars merge they produce jets of high-energy particles and radiation. If the jet is pointed toward Earth, a flash, or burst, of gamma rays can be detected. If the jet is not pointed in our direction, scientists look for other signals, including the detection of gravitational waves.

With the observation of a bright burst of X-rays, astronomers have found another signal, one that validates predictions first made in 2013 by UNLV astrophysicist Bing Zhang, a member of the research team and one of the study’s corresponding authors.

Researchers identified the likely origin of the source, dubbed XT2, by studying how its X-ray light varied with time, and comparing this behavior with predictions by Zhang for the likely X-ray signature produced by a newly-formed magnetar. XT2 matched the characteristic signature predicted by Zhang, which gives astronomers a new window into the interior of neutron stars, objects that are so dense that their properties could never be replicated on Earth.

“We can’t throw neutron stars together in a lab to see what happens, so we have to wait until the universe does it for us,” said Zhang.

The discovery of a remnant magnetar also disrupts a common belief among scientists that the merger of two neutron stars would only result in the formation of a black hole, either immediately or in less than a second.

“This discovery confirms that at least some of these mergers will make die-hard massive neutron stars that can survive an extended period of time,” said Zhang. “If two neutron stars can collide and a heavy neutron star survives, then this also tells us that their structure is relatively stiff and resilient.”

Chandra observed XT2 in March 2015 as it suddenly appeared and then faded away within hours. Researchers say it’s possible the magnetar lost energy through an X-ray-emitting wind, slowing down its rate of spin as the source faded. The amount of X-ray emission stayed roughly constant for about 30 minutes, then its brightness gradually decreased before becoming undetectable.

The source is located in the Chandra Deep Field-South, which is the deepest X-ray image ever taken. Though the source first appeared in 2015, it was discovered later through an analysis of archival data.

The international team, led by Yongquan Xue of the University of Science and Technology of China, also considered whether the collapse of a massive star could have caused XT2, rather than a neutron star merger.

The source is in the outskirts of its host galaxy, which aligns with the idea that supernova explosions that left behind the neutron stars kicked them there a few billion years earlier. The galaxy itself also has certain properties – including a low rate of star formation compared to other galaxies of a similar mass – that are much more consistent with the type of galaxy where the merger of two neutron stars is expected to occur.

Armed with new insight, the research team is now reviewing Chandra data for similar sources. “Just as with this source, the data sitting in archives might contain some unexpected treasures,” said co-author Xuechen Zheng, also of the University of Science and Technology of China.