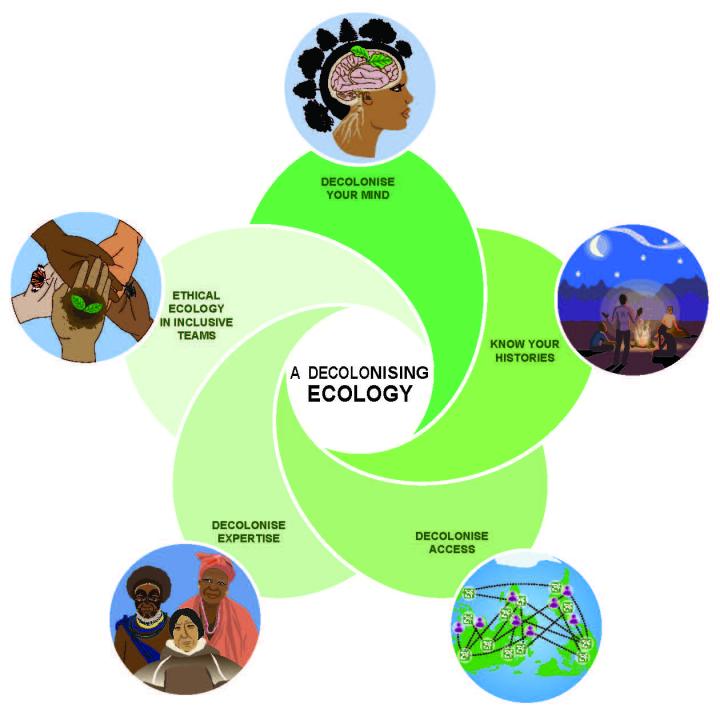 Knowledge systems outside of those sanctioned by Western universities have often been marginalised or simply not engaged with in many science disciplines, but there are multiple examples where Western scientists have claimed discoveries for knowledge that resident experts already knew and shared. This demonstrates not a lack of knowledge itself but rather that, for many scientists raised in Western society, little education concerning histories of systemic oppression has been by design. Western scientific knowledge has also been used to justify social and environmental control, including dispossessing colonised people of their land and ways of life and discounting existing knowledge systems.

But how can those in the ecological discipline slowly begin to practise ecology in a more creative, reflective, equitable and inclusive way? According to a new paper published in the journal Nature Ecology & Evolution there are five interventions to build a more anti-oppressive and decolonial ecology:

“These actions are not offered as a checklist capable of undoing unjust systems worldwide, nor to overshadow long histories of place-based anti-colonial and anti-racist struggle, but as connection points to action for practising ecologists,” said Dr Chris Trisos, from the Africa Climate and Development Initiative based at the University of Cape Town and co-author of the paper Decoloniality and anti-oppressive practices for a more ethical ecology.

“Because settler-colonial processes have increased vulnerability of people and other species by displacing them into unfamiliar or lower quality landscapes, the concept of ecological vulnerability to environmental change intersects with environmental justice,” he added.

Co-author Dr Jess Auerbach from the Department of Anthropology at North-West University shared that access to scholarly literature and data resources is a global issue. Data and research papers are often locked behind a paywall or housed in servers and museums in the Global North even when the data collected was from the Global South. “This makes it inaccessible to scholars from under-resourced institutions who are often compelled to use pirate websites to read scientific publications. Publishing only open access resources is part of the solution but the issues run much deeper and consideration must be given to where data repositories are held, who holds the right to this data and what is needed to access it,” she said.

One area the researchers highlight is the use of English as the dominant form of knowledge communication in science which can lead to publication bias against non-native English-speaking scientists. When one reads, writes and thinks in English, it is easy to forget that for the majority of people ecological knowledge is produced and tested in other tongues. It is ironic that in many ecology departments, knowing Latin names of species is met with admiration, whereas speaking living languages of sites of data origination is a ‘nice to-have’ skill.

Ecological scholarship must thus develop methods to include multiple languages in evidence synthesis and could require that scholars gain fluency in relevant languages as an essential entry point for understanding rich bodies of local knowledge on ecosystems and cultivating a more inclusive way of knowing and studying ecology. More inclusive teams are also needed to lead these projects and actively deconstruct biases. Diverse teams that include and amplify the voices of indigenous communities result in more innovative and effective problem solving and richer datasets.

Co-author Associate Professor Madhu Katti from North Carolina State University in the USA shared an example: “The Amazon Conservation Team works with Indigenous communities in several South American countries in participatory projects to promote self-governance and biodiversity conservation. They have developed a methodology of collaborative cultural mapping by providing technology such as mobile phones and apps to Indigenous communities. The Kogi people, among the last surviving civilizations from the pre-Columbian period started using a mobile phone app to create geo-referenced maps of their land within the framework of their own cultural knowledge, resulting in a richer dataset than a parachuting Western ecologist or conservationist might be able to gather.

“Analysis of change in social-ecological systems must consider the impacts of colonial histories and offer solutions in a decolonial framework. More opportunities for historically marginalized groups to set research agendas is an important way of redressing ongoing power imbalances,” he added.

Access the paper: Decoloniality and anti-oppressive practices for a more ethical ecology