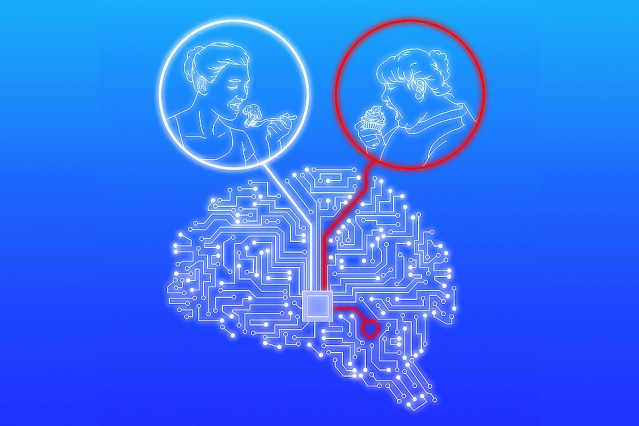 Together, obesity and Type 2 diabetes rank among our nation’s greatest health problem, and they largely result from what many call an “addiction” to sugar. But solving this problem is more complicated than solving drug addiction, because it requires reducing the drive to eat unhealthy foods without affecting the desire to eat healthy foods when hungry.

In a new paper in Cell, neuroscientists at MIT have untangled these two processes in mice and shown that inhibiting a previously unknown brain circuit that regulates compulsive sugar consumption does not interfere with healthy eating.

“For the first time, we have identified how the brain encodes compulsive sugar seeking and we’ve also shown that it appears to be distinct from normal, adaptive eating,” says senior author Kay Tye, a principal investigator at the Picower Institute for Learning and Memory who previously developed novel techniques for studying brain circuitry in addiction and anxiety. “We need to study this circuit in more depth, but our ultimate goal is to develop safe, noninvasive approaches to avert maladaptive eating behaviors, first in mice and eventually in people.”

Drug addiction is defined as compulsive drug-seeking despite adverse consequences at school, work, or home. Addictive drugs “hijack” the brain’s the natural reward-processing center, the ventral tegmental area (VTA). But food is a natural reward and, unlike a drug, is necessary for survival, so it has been unclear whether overeating results from a similar compulsion, or from something else.

“This study represents, in my opinion, an outstanding step forward in understanding the many intricate aspects of feeding behaviors,” says Antonello Bonci, scientific director at the National Institute on Drug Abuse, who was not involved with the research. “While there have been many excellent studies in the past, looking at the compulsive drive of substance-use disorders, this is the first time that a study goes very deeply and comprehensively into the same aspects for compulsive feeding behavior. From a translational perspective, the extraordinary multidisciplinary approach used in this study produced a very exciting finding: that compulsive sugar consumption is mediated by a different neural circuit than physiological, healthy eating.”

For the study, Tye and her graduate student Edward Nieh focused on the connections between the VTA and the lateral hypothalamus (LH), which controls feeding. But because the LH also controls diverse other behaviors and connects to multiple other brain regions, no one had yet isolated a feeding and reward-processing circuit. Tye and Nieh first identified and characterized just the LH neurons that connect to the VTA and recorded their naturally occurring activities in brain slices, with the help of Gillian Matthews, before moving to animal experiments. Electrodes recorded the activity of these identified neurons during animal behaviors.

Mice naturally love sucrose — similar to humans loving sugar-rich sodas — so Nieh trained mice to seek out sucrose at a delivery port upon hearing and seeing a cue. After the mice learned to predict a sucrose reward upon cue, he randomly withheld the reward about half the time — a bitter disappointment. Other times, the mice unexpectedly received a sucrose reward without any predictive cue — a sweet surprise. This difference between the expectation and the experience is called the reward-prediction error.

The neural recordings showed that one type of LH neurons connecting to the VTA only became active after the animal had learned to seek a sucrose reward, whether or not it actually received the reward. Another set of LH neurons, upon receiving feedback from the VTA, encoded the response to the reward or to its omission.

Next, Nieh worked with an MD/PhD student in Tye's lab, Stephen Allsop, to modify mice so that the LH-VTA neural projections carried light-sensitive proteins that can activate or silence neurons with pulses of light, a method called optogenetics. Activating the projections led to compulsive sucrose-eating and increased overeating in mice that were full. Inactivating this pathway reduced the compulsive sucrose-seeking that resembles addiction, but did not prevent mice that were hungry from eating regular chow. “That was exciting because we have the recording data to show how this compulsive sugar-seeking happens,” Nieh says, “and we can drive or suppress just the compulsive behavior by making very precise changes in the neural circuit.”

“Addiction researchers have hypothesized that the transition from actions to habits to compulsion is the path to addiction formation, but exactly where and how this happens in the brain has been a mystery,” says Tye, who is also the Whitehead Career Development Assistant Professor in MIT's Department of Brain and Cognitive Sciences. “Now we have evidence showing that this transition is represented in the LH-VTA circuit.”

Nieh, working with Matthews, a postdoc in the Tye lab, also showed that the LH neurons send a mix of excitatory (glutamate) and inhibitory (GABA) signals to the VTA. But contrary to expectation, it was the inhibitory signals, not the excitatory ones, that triggered the feeding activity in the mice. When GABA projections alone were activated, the mice behaved bizarrely, gnawing on the bottom of the cage and pantomiming the motions of bringing a food nugget to the mouth and chewing it. (They had been fed, so they were not hungry.) “We think the glutamatergic projections regulate the role of the GABAergic projections, directing what’s appropriate to gnaw on,” Nieh says. “Both components must work together to get meaningful feeding signals.”

“This is very important for the field, because this is something we did not know before,” Bonci says, “and bears the potential to revolutionize the way we approach treatment for compulsive overeating.”

The researchers also characterized the heterogeneous neurons on the receiving end of these projections in the VTA. Each subset of LH neurons connects with dopamine- and GABA-producing neurons in the VTA. The lab is now investigating how feeding and sucrose-seeking behaviors differ based on the target neuron type.

This research was initiated as part of Tye’s 2013 NIH Director’s New Investigator Award, with the long-term goal of establishing a new paradigm for treating obesity that could be applied to other neuropsychiatric disorders. Additional funding came from multiple public and private sources, including Nieh’s NSF Graduate Research Fellowship, the Integrative Neuronal Systems Fellowship, and the Training Program in the Neurobiology of Learning and Memory. Kara N. Presbrey, Christopher A. Leppla, Romy Wichmann, Rachael Neve, and Craig P. Wildes, all members of the Picower Institute, also contributed to this work.