Decoding a key part of the cell, atom by atom

Whatever you are doing, whether it is driving a car, going for a jog, or even at your laziest, eating chips and watching TV on the couch, there is an entire suite of molecular machinery inside each of your cells hard at work. That machinery, far too small to see with the naked eye or even with many microscopes, creates energy for the cell, manufactures its proteins, makes copies of its DNA, and much more. 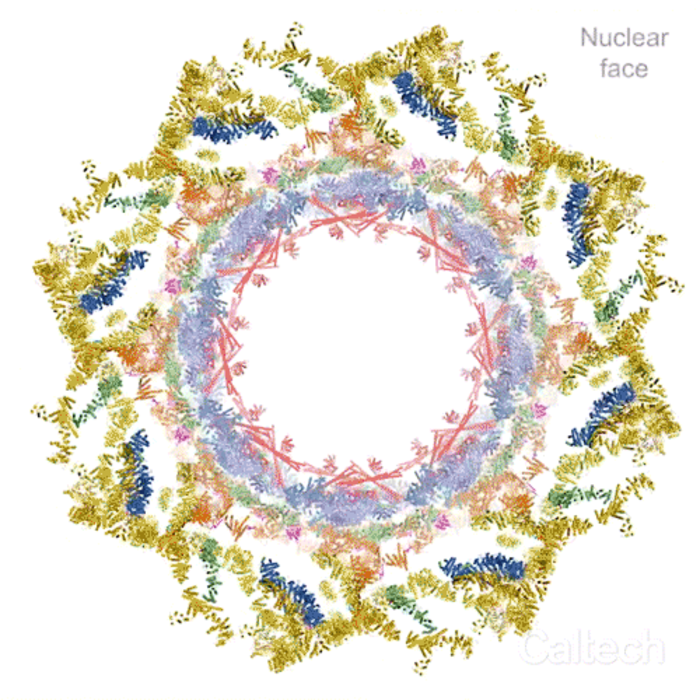 Whatever you are doing, whether it is driving a car, going for a jog, or even at your laziest, eating chips and watching TV on the couch, there is an entire suite of molecular machinery inside each of your cells hard at work. That machinery, far too small to see with the naked eye or even with many microscopes, creates energy for the cell, manufactures its proteins, makes copies of its DNA, and much more.

Among those pieces of machinery, and one of the most complex, is something known as the nuclear pore complex (NPC). The NPC, which is made of more than 1,000 individual proteins, is an incredibly discriminating gatekeeper for the cell’s nucleus, the membrane-bound region inside a cell that holds that cell’s genetic material. Anything going in or out of the nucleus has to pass through the NPC on its way.

The NPC’s role as a gatekeeper of the nucleus means it is vital for the operations of the cell. Within the nucleus, DNA, the cell’s permanent genetic code, is copied into RNA. That RNA is then carried out of the nucleus so it can be used to manufacture the proteins the cell needs. The NPC ensures the nucleus gets the materials it needs for synthesizing RNA, while also protecting the DNA from the harsh environment outside the nucleus and enabling the RNA to leave the nucleus after it has been made.

“It’s a little like an airplane hangar where you can repair 747s, and the door opens to let the 747 come in, but there’s a person standing there who can keep a single marble from getting out while the doors are open,” says Caltech’s André Hoelz, professor of chemistry and biochemistry and a Faculty Scholar of the Howard Hughes Medical Institute. For more than two decades, Hoelz has been studying and deciphering the structure of the NPC in relation to its function. Over the years, he has steadily chipped away at its secrets, unraveling them piece by piece by piece by piece.

The implications of this research are potentially huge. Not only is the NPC central to the operations of the cell, it is also involved in many diseases. Mutations in the NPC are responsible for some incurable cancers, for neurodegenerative and autoimmune diseases such as amyotrophic lateral sclerosis (ALS) and acute necrotizing encephalopathy, and for heart conditions including atrial fibrillation and early sudden cardiac death. Additionally, many viruses, including the one responsible for COVID-19, target and shutdown the NPC during the course of their lifecycles.

Now, in a pair of papers published in the journal Science, Hoelz and his research team describe two important breakthroughs: the determination of the structure of the outer face of the NPC and the elucidation of the mechanism by which special proteins act like a molecular glue to hold the NPC together.

In their paper titled “Architecture of the cytoplasmic face of the nuclear pore,” Hoelz and his research team describe how they mapped the structure of the side of the NPC that faces outward from the nucleus and into the cells’ cytoplasm. To do this, they had to solve the equivalent of a very tiny 3-D jigsaw puzzle, using imaging techniques such as electron microscopy and X-ray crystallography on each puzzle piece.

Stefan Petrovic, a graduate student in biochemistry and molecular biophysics and one of the co-first authors of the papers, says the process began with Escherichia coli bacteria (a strain of bacteria commonly used in labs) that were genetically engineered to produce the proteins that make up the human NPC.

“If you walk into the lab, you can see this giant wall of flasks in which cultures are growing,” Petrovic says. “We express each individual protein in E. coli cells, break those cells open, and chemically purify each protein component.”

Once that purification—which can require as much as 1,500 liters of bacterial culture to get enough material for a single experiment—was complete, the research team began to painstakingly test how the pieces of the NPC fit together.

George Mobbs, a senior postdoctoral scholar research associate in chemistry and another co- first author of the paper, says the assembly happened in a “stepwise” fashion; rather than pouring all the proteins together into a test tube at the same time, the researchers tested pairs of proteins to see which ones would fit together, like two puzzle pieces. If a pair was found that fit together, the researchers would then test the two now-combined proteins against a third protein until they found one that fit with that pair, and then the resulting three-piece structure was tested against other proteins, and so on. Working their way through the proteins in this way eventually produced the final result of their paper: a 16-protein wedge that is repeated eight times, like slices of a pizza, to form the face of the NPC.

“We reported the first complete structure of the entire cytoplasmic face of the human NPC, along with rigorous validation, instead of reporting a series of incremental advances of fragments or portions based on partial, incomplete, or low-resolution observation,” says Si Nie, postdoctoral scholar research associate in chemistry and also a co-first author of the paper. “We decided to patiently wait until we had acquired all necessary data, reporting a humungous amount of new information.”

Their work complemented research conducted by Martin Beck of the Max Planck Institute of Biophysics in Frankfurt, Germany, whose team used cryo-electron tomography to generate a map that provided the contours of a puzzle into which the researchers had to place the pieces. To accelerate the completion of the puzzle of the human NPC structure, Hoelz and Beck exchanged data more than two years ago and then independently built structures of the entire NPC. “The substantially improved Beck map showed much more clearly where each piece of the NPC—for which we determined the atomic structures—had to be placed, akin to a wooden frame that defines the edge of a puzzle,” Hoelz says.

The experimentally determined structures of the NPC pieces from the Hoelz group served to validate the modeling by the Beck group. “We placed the structures into the map independently, using different approaches, but the final results completely agreed. It was very satisfying to see that,” Petrovic says.

“We built a framework on which a lot of experiments can now be done,” says Christopher Bley, a senior postdoctoral scholar research associate in chemistry and also co-first author. “We have this composite structure now, and it enables and informs future experiments on NPC function, or even diseases. There are a lot of mutations in the NPC that are associated with terrible diseases, and knowing where they are in the structure and how they come together can help design the next set of experiments to try and answer the questions of what these mutations are doing.”

“This elegant arrangement of spaghetti noodles”

In the other paper, titled “Architecture of the linker-scaffold in the nuclear pore,” the research team describes how it determined the entire structure of what is known as the NPC’s linker-scaffold—the collection of proteins that help hold the NPC together while also providing it with the flexibility it needs to open and close and to adjust itself to fit the molecules that pass through.

Hoelz likens the NPC to something built out of Lego bricks that fit together without locking together and are instead lashed together by rubber bands that keep them mostly in place while still allowing them to move around a bit.

“I call these unstructured glue pieces the ‘dark matter of the pore,'” Hoelz says. “This elegant arrangement of spaghetti noodles holds everything together.”

The process for characterizing the structure of the linker-scaffold was much the same as the process used to characterize the other parts of the NPC. The team manufactured and purified large amounts of the many types linker and scaffold proteins, used a variety of biochemical experiments and imaging techniques to examine individual interactions, and tested them piece by piece to see how they fit together in the intact NPC.

To check their work, they introduced mutations into the genes that code for each of those linker proteins in a living cell. Since they knew how those mutations would change the chemical properties and shape of a specific linker protein, making it defective, they could predict what would happen to the structure of the cell’s NPCs when those defective proteins were introduced. If the cell’s NPCs were functionally and structurally defective in the way they expected, they knew they had the correct arrangement of the linker proteins.

“A cell is much more complicated than the simple system we create in a test tube, so it is necessary to verify that results obtained from in vitro experiments hold up in vivo,” Petrovic says.

The assembly of the NPC’s outer face also helped solve a longtime mystery about the nuclear envelope, the double membrane system that surrounds the nucleus. Like the membrane of the cell within which the nucleus resides, the nuclear membrane is not perfectly smooth. Rather, it is studded with molecules called integral membrane proteins (IMPs) that serve in a variety of roles, including acting as receptors and helping to catalyze biochemical reactions.

Although IMPs can be found on both the inner and outer sides of the nuclear envelope, it had been unclear how they actually traveled from one side to the other. Indeed, because IMPs are stuck inside of the membrane, they cannot just glide through the central transport channel of the NPC as do free-floating molecules.

Once Hoelz’s team understood the structure of the NPC’s linker-scaffold, they realized that it allows for the formation of little “gutters” around its outside edge that allow the IMPs to slip past the NPC from one side of the nuclear envelope to the other while always staying embedded in the membrane itself.

“It explains a lot of things that have been enigmatic in the field. I am very happy to see that the central transport channel indeed has the ability to dilate and form lateral gates for these IMPs, as we had originally proposed more than a decade ago,” Hoelz says.

Taken together, the findings of the two papers represent a leap forward in scientists’ understanding of how the human NPC is built and how it works. The team’s discoveries open the door for much more research. “Having determined its structure, we can now focus on working out the molecular bases for the NPC’s functions, such as how mRNA gets exported and the underlying causes for the many NPC-associated diseases with the goal of developing novel therapies,” Hoelz says.

The papers describing the work appear in the June 10 issue of the journal Science.

Funding for the research was provided by the National Institutes of Health, the Howard Hughes Medical Institute, and the Heritage Medical Research Institute.

Architecture of the cytoplasmic face of the nuclear pore