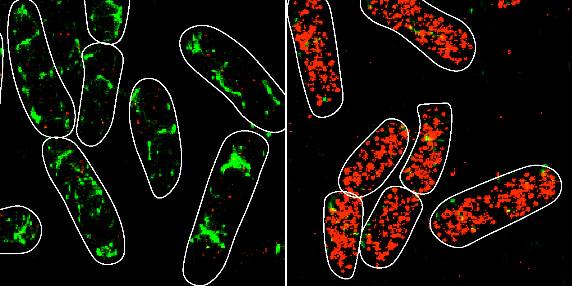 Bacteria employ many different strategies to regulate gene expression in response to fluctuating, often stressful, conditions in their environments. One type of regulation involves non-coding RNA molecules called small RNAs (sRNAs), which are found in all domains of life. A new study led by researchers at the University of Illinois describes, for the first time, the impacts of sRNA interactions in individual bacterial cells. Their findings are reported in the journal Nature Communications, with the paper selected as an Editors’ highlight article.

Bacterial sRNAs are often involved in regulating stress responses using mechanisms that involve base-pairing interactions with a target mRNA and enhancing or repressing its stability or the amount of protein being made from the mRNA. Hfq, a hexameric RNA chaperone protein, facilitates binding between the RNAs and promotes stability of the sRNA. Although the kinetics of sRNA-mRNA interactions have been studied in vitro, the mutational impacts on base-pairing interactions in vivo remain largely unknown.

“We wanted to understand how individual base-pair interactions between the small RNA and one of its mRNA targets contributed to the overall regulatory outcome and thereby, the amount of protein being produced from the mRNA in these conditions,” said Illinois professor of microbiology Cari Vanderpool, also a faculty member in the Carl R. Woese Institute for Genomic Biology (IGB), who co-led the study. “We took an approach that allowed us to visualize and count individual small RNA and mRNA molecules inside bacterial cells, giving us insight into what’s happening at the molecular level.”

The research team involved collaborations with professor of biophysics Taekjip Ha (Johns Hopkins University) and Illinois professor of chemistry and IGB faculty Zaida Luthey-Schulten. The researchers used mathematical modeling and quantitative super-resolution imaging to examine the consequences of changing individual base-pair interactions on kinetic parameters of regulation such as the time needed for an sRNA to find an mRNA target.

The study focused on the sRNA SgrS, which is made in bacterial cells when sugar transport exceeds what the cell can handle through metabolism. Previous work by the Vanderpool group demonstrated that under sugar stress conditions, SgrS binds to its primary target mRNA, ptsG, which encodes part of the glucose transport machinery. Together with Hfq, SgrS inhibits translation of ptsG and thereby prevents production of new glucose transporters to slow down transport until metabolism can catch up.

To identify the key regions of SgrS important for ptsG regulation, researchers used high-throughput sequencing to analyze thousands of mutants in parallel and find those with the strongest effects on the regulatory interactions.

“What we found was that individual base-pair interactions had some effect on the regulation, but they were relatively minor effects,” said Vanderpool. “The much bigger effects we saw were when we saw mutations in the sRNA that disrupted its ability to interact with Hfq. If the sRNA couldn’t effectively bind to the chaperone, then it was much slower in finding its mRNA target and once found, it came unbound much more quickly.”

“Our high-throughput sequencing and quantitative super-resolution imaging platform was able to measure modest differences in rates of association and dissociation arising because of single base-pair mismatches between SgrS and ptsG mRNA,” said Anustup Poddar, postdoctoral researcher and first author of the paper. “The fact that these values are much smaller than the thermodynamically predicted values tells us that there is a lot more to learn about the role of chaperone proteins in base-pairing mediated target search.”

Even with disrupted base-pairing, SgrS regulation of ptsG was still observed as long as Hfq was around. The study clearly demonstrated Hfq’s important role in promoting and stabilizing the interactions between SgrS and ptsG. These findings were surprising since the biggest impacts were thought to come from disruption of the base-pairing interactions, said Vanderpool.

“I learned a different way of thinking from the collaborators and realized how important and powerful mathematical modeling could be,” said Muhammad Azam, former graduate student who worked on the study.

The Vanderpool group has an ongoing collaboration with professor of biochemistry and molecular biology Jingyei Fei (University of Chicago) to investigate the kinetic parameters of other SgrS targets, with the overall goal of understanding the hierarchy of regulation.

“We had the questions that we wanted to ask but didn’t have the high-resolution methods to look at this in a quantitative way,” said Vanderpool. “The best kind of collaboration is when each person brings some kind of expertise and different ways of looking at a problem to the table that makes the outcome exciting and fun.”

Vanderpool was recently elected Fellow of the American Academy of Microbiology in recognition of her scientific achievement and original contributions towards advancing the field of microbiology. The National Institutes of Health and the National Science Foundation supported this work.