Scientists from Scripps Institution of Oceanography at the University of California San Diego, the University of São Paulo and UC Santa Cruz collaborated to discover and validate the enzymes responsible for the production of one of the most toxic and fast-acting neurotoxins associated with freshwater harmful algal blooms in lakes and ponds. 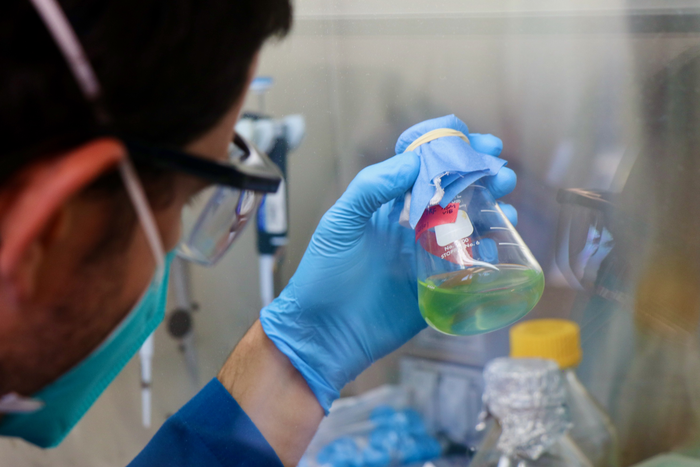 Scientists from Scripps Institution of Oceanography at the University of California San Diego, the University of São Paulo and UC Santa Cruz collaborated to discover and validate the enzymes responsible for the production of one of the most toxic and fast-acting neurotoxins associated with freshwater harmful algal blooms in lakes and ponds.

The team combined genetic and biochemical studies to show how freshwater cyanobacteria produce the potent neurotoxin called guanitoxin. This discovery revealed that guanitoxin-producing cyanobacteria are more prevalent than originally known in the United States, opening the possibility for new molecular diagnostic testing to better inform and protect the public from this natural freshwater toxin. Findings were described in a paper published in the Journal of the American Chemical Society on May 18, 2022.

The paper also “shows guanitoxin being produced in freshwater bodies that have undergone past very toxic events,” said study lead author Stella Lima, a former PhD student at the University of São Paulo and visiting scholar at Scripps Oceanography.

Guanitoxin is one of the most potent neurotoxins made by cyanobacteria that actually has a similar mechanism of action to pesticides and chemical warfare agents, said Timothy Fallon, a Scripps postdoctoral scientist in the laboratory of Scripps marine chemical biologist Bradley Moore, where Lima was a visiting scholar.

Harmful algal blooms (HABs) form in lakes and ponds when cyanobacteria, otherwise known as blue-green algae, become abundant. These freshwater HABs produce different cyanotoxins, which can harm nearby animals and people. Depending on the cyanotoxin involved, exposed people exhibit symptoms such as stomach pain, headache, vomiting, liver damage or neurological impairment, according to federal health officials. Over the years, many regions have declared emergencies and issued “do not drink” advisories. Pet and animal deaths have also been reported after the animals came in contact with affected water.

Freshwater HABs can cause myriad social and economic problems for communities and are a problematic public health issue, said Lima. Testing and monitoring for certain cyanotoxins, such as microcystin, cylindrospermopsin, saxitoxin and anatoxin-a, occur because methods are available to do so, but despite the fact that guanitoxin is the second most toxic cyanotoxin, “no one’s looking for it” because the right methods aren’t available for detection and monitoring, Lima added.

As a PhD student in 2016, Lima found a set of genes she suspected was responsible for making guanitoxin by a cyanobacterium isolated from a large freshwater bloom in Brazil. The strain was isolated from the Tapacurá reservoir in Pernambuco, Brazil and  has been maintained and cultivated by Marli Fiore, Lima’s former PhD advisor and co-author of the study

After this discovery, Lima looked for a partnership to confirm her suspicion. So, in 2018 she traveled to UC San Diego to work with Moore, who had established the first biochemical studies on guanitoxin back in the early 1990s. The team of scientists worked together to establish the precise functions of all nine enzymes that convert an ordinary amino acid to a neurotoxin, Lima said.

After discovering the genes involved in the production of guanitoxin and carefully validating their functions, researchers searched through thousands of samples from publically available environmental data for the guanitoxin biosynthetic genes.

The researchers were able to detect toxin genes for guanitoxin in environmental hotspots in the United States in populated areas, said Moore, who is a co-corresponding author of the study. The two areas of concern, where the toxin genes were regularly detected for guanitoxin, were in Lake Erie near Toledo, Ohio and in Lake Mendota, Wisconsin. Other areas of detection include the Amazon River in Brazil, the Columbia River in Oregon and the Delaware River in Delaware.

“We found these genes in lots of different fresh water sources, but nobody has looked for or monitored for this particular toxin environmentally,” said Shaun McKinnie, a  chemistry and biochemistry assistant professor  at UC Santa Cruz and former postdoctoral scholar in the Moore Lab, who contributed to the study.

“Here’s this neurotoxic potential in these lakes that people use recreationally, but this toxin has gone under the radar until our work,” Fallon said.

Moore said follow-up work should include fieldwork to detect other areas where guanitoxin may be produced.

Cyanobacterial blooms are becoming more and more prevalent in the United States and worldwide, mostly because of climate change and the introduction of fertilizers and other chemicals related to farming into bodies of water.

While HABs can be visible on the surface of freshwater bodies, the federal Environmental Protection Agency (EPA) states “cyanotoxins can be present before and after blooms are visible. Therefore, it is recommended that cyanotoxin levels be confirmed through laboratory testing of the water.”

“Now that we figured out the guanitoxin pathway at the genomic level, we can also give additional pieces of information to say: ‘This is a safe body of water, or this is a less safe body of water; Does this have the ability to become toxic and can we predict toxic events?’” McKinnie said.

The researchers have filed a provisional patent application based on the concept of using the guanitoxin biosynthetic gene sequences they identified in the lab and applying molecular diagnostics using those sequences to find the genes in the environment.

The study, “Biosynthesis of guanitoxin enables environmental detection in freshwater cyanobacteria,” was funded by the National Institute of Environmental Health Sciences, the Sao Paulo Research Foundation, and the National Council for Scientific and Technological Development. Other funding was from the Simons Foundation Fellowship of the Life Sciences Research Foundation; the Brazilian Federal Agency for the Support Evaluation of Graduate Education; startup funding and a Faculty Research Grant from UC Santa Cruz.

The authors declare the following competing financial interest(s): A provisional patent application has been filed on the use of gnt enzyme coding sequences in environmental molecular diagnostic monitoring and detection (United States Provisional Patent Application #63/267,862).