An intermediate-mass black hole lurking undetected in a dwarf galaxy revealed itself to astronomers when it gobbled up an unlucky star that strayed too close. The shredding of the star, known as a “tidal disruption event” or TDE, produced a flare of radiation that briefly outshone the combined stellar light of the host dwarf galaxy and could help scientists better understand the relationships between black holes and galaxies. 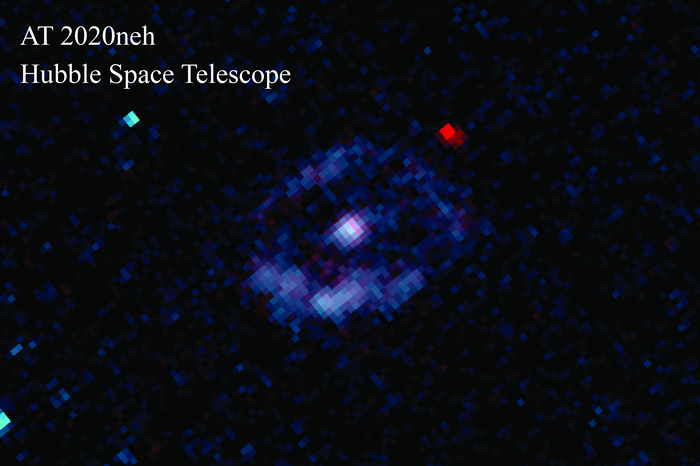 An intermediate-mass black hole lurking undetected in a dwarf galaxy revealed itself to astronomers when it gobbled up an unlucky star that strayed too close. The shredding of the star, known as a “tidal disruption event” or TDE, produced a flare of radiation that briefly outshone the combined stellar light of the host dwarf galaxy and could help scientists better understand the relationships between black holes and galaxies.

The flare was captured by astronomers with the Young Supernova Experiment (YSE), a survey designed to detect cosmic explosions and transient astrophysical events. An international team led by scientists at UC Santa Cruz, the Niels Bohr Institute at the University of Copenhagen, and Washington State University reported the discovery in a paper published November 10 in Nature Astronomy.

“This discovery has created widespread excitement because we can use tidal disruption events not only to find more intermediate-mass black holes in quiet dwarf galaxies, but also to measure their masses,” said coauthor Ryan Foley, an assistant professor of astronomy and astrophysics at UC Santa Cruz who helped plan the YSE survey.

“The fact that we were able to capture this midsize black hole whilst it devoured a star offered us a remarkable opportunity to detect what otherwise would have been hidden from us,” Angus said. “What is more, we can use the properties of the flare itself to better understand this elusive group of middle-weight black holes, which could account for the majority of black holes in the centers of galaxies.”

Supermassive black holes are found at the centers of all massive galaxies, including our own Milky Way. Astronomers conjecture that these massive beasts, with millions or billions of times the mass of the sun, could have grown from smaller “intermediate-mass” black holes with thousands to hundreds of thousands of solar masses.

One theory for how such massive black holes were assembled is that the early universe was rampant with small dwarf galaxies with intermediate-mass black holes. Over time, these dwarf galaxies would have merged or been gobbled up by more massive galaxies, their cores combining each time to build up the mass in the center of the growing galaxy. This merger process would eventually create the supermassive black holes seen today.

“If we can understand the population of intermediate-mass black holes out there—how many there are and where they are located—we can help determine if our theories of supermassive black hole formation are correct,” said coauthor Enrico Ramirez-Ruiz, professor of astronomy and astrophysics at UCSC and Niels Bohr Professor at the University of Copenhagen.

But do all dwarf galaxies have midsize black holes?

Classic black hole hunting techniques, which look for actively feeding black holes, are often not sensitive enough to uncover black holes in the centers of dwarf galaxies. As a result, only a minuscule fraction of dwarf galaxies is known to host intermediate-mass black holes. Finding more midsize black holes with tidal disruption events could help to settle the debate about how supermassive black holes form.

“One of the biggest open questions in astronomy is currently how supermassive black holes form,” said coauthor Vivienne Baldassare, professor of physics and astronomy at Washington State University.

Data from the Young Supernova Experiment enabled the team to detect the first signs of light as the black hole began to eat the star. Capturing this initial moment was pivotal to unlocking how big the black hole was, because the duration of these events can be used to measure the mass of the central black hole. This method, which until now had only been shown to work well for supermassive black holes, was first proposed by Ramirez-Ruiz and coauthor Brenna Mockler at UC Santa Cruz.

“This flare was incredibly fast, but because our YSE data gave us so much early information about the event, we were really able to pin down the mass of the black hole using it,” Angus said.