A star’s death throes have so violently disrupted its planetary system that the dead star left behind, called a white dwarf, is siphoning off debris from both the system’s inner and outer reaches. This is the first time astronomers have observed a white dwarf star that is consuming both rocky-metallic and icy material, the ingredients of planets. 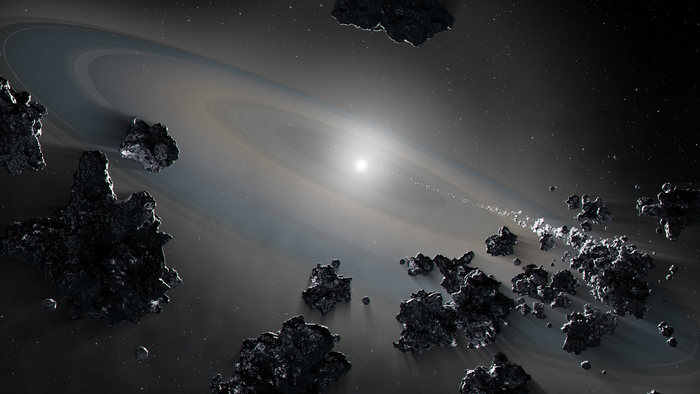 A star’s death throes have so violently disrupted its planetary system that the dead star left behind, called a white dwarf, is siphoning off debris from both the system’s inner and outer reaches. This is the first time astronomers have observed a white dwarf star that is consuming both rocky-metallic and icy material, the ingredients of planets.

Archival data from NASA’s Hubble Space Telescope and other NASA observatories were essential in diagnosing this case of cosmic cannibalism. The findings help describe the violent nature of evolved planetary systems and can tell astronomers about the makeup of newly forming systems.

The findings are based on analyzing material captured by the atmosphere of the nearby white dwarf star G238-44. A white dwarf is what remains of a star like our Sun after it sheds its outer layers and stops burning fuel though nuclear fusion. “We have never seen both of these kinds of objects accreting onto a white dwarf at the same time,” said Ted Johnson, the lead researcher and recent University of California, Los Angeles (UCLA) bachelor’s graduate. “By studying these white dwarfs, we hope to gain a better understanding of planetary systems that are still intact.”

The findings are also intriguing because small icy objects are credited for crashing into and “irrigating” dry, rocky planets in our solar system. Billions of years ago comets and asteroids are thought to have delivered water to Earth, sparking the conditions necessary for life as we know it. The makeup of the bodies detected raining onto the white dwarf implies that icy reservoirs might be common among planetary systems, said Johnson.

“Life as we know it requires a rocky planet covered with a variety of elements like carbon, nitrogen, and oxygen,” said Benjamin Zuckerman, UCLA professor and co-author. “The abundances of the elements we see on this white dwarf appear to require both a rocky and a volatile-rich parent body – the first example we’ve found among studies of hundreds of white dwarfs.”

Theories of planetary system evolution describe the transition between a red giant star and white dwarf phases as a chaotic process. The star quickly loses its outer layers and its planets’ orbits dramatically change. Small objects, like asteroids and dwarf planets, can venture too close to giant planets and be sent plummeting toward the star. This study confirms the true scale of this violent chaotic phase, showing that within 100 million years after the beginning of its white dwarf phase, the star is able to simultaneously capture and consume material from its asteroid belt and Kuiper belt-like regions.

The estimated total mass eventually gobbled up by the white dwarf in this study may be no more than the mass of an asteroid or small moon. While the presence of at least two objects that the white dwarf is consuming is not directly measured, it’s likely one is metal-rich like an asteroid and another is an icy body similar to what’s found at the fringe of our solar system in the Kuiper belt.

Though astronomers have cataloged over 5,000 exoplanets, the only planet where we have some direct knowledge of its interior makeup is Earth. The white dwarf cannibalism provides a unique opportunity to take planets apart and see what they were made of when they first formed around the star.

The team measured the presence of nitrogen, oxygen, magnesium, silicon and iron, among other elements. The detection of iron in a very high abundance is evidence for metallic cores of terrestrial planets, like Earth, Venus, Mars, and Mercury. Unexpectedly high nitrogen abundances led them to conclude the presence of icy bodies. “The best fit for our data was a nearly two-to-one mix of Mercury-like material and comet-like material, which is made up of ice and dust,” Johnson said. “Iron metal and nitrogen ice each suggest wildly different conditions of planetary formation. There is no known solar system object with so much of both.”

Death of a Planetary System

When a star like our Sun expands into a bloated red giant late in its life, it will shed mass by puffing off its outer layers. One consequence of this can be the gravitational scattering of small objects like asteroids, comets, and moons by any remaining large planets. Like pinballs in an arcade game, the surviving objects can be thrown into highly eccentric orbits.

“After the red giant phase, the white dwarf star that remains is compact – no larger than Earth. The wayward planets end up getting very close to the star and experience powerful tidal forces that tear them apart, creating a gaseous and dusty disk that eventually falls onto the white dwarf’s surface,” Johnson explained.

The researchers are looking at the ultimate scenario for the Sun’s evolution, 5 billion years from now. Earth might be completely vaporized along with the inner planets. But the orbits of many of the asteroids in the main asteroid belt will be gravitationally perturbed by Jupiter and will eventually fall onto the white dwarf that the remnant Sun will become.

For over two years, the research group at UCLA, the University of California, San Diego and the Kiel University in Germany, has worked to unravel this mystery by analyzing the elements detected on the white dwarf star cataloged as G238-44. Their analysis includes data from NASA’s retired Far Ultraviolet Spectroscopic Explorer (FUSE), the Keck Observatory’s High Resolution Echelle Spectrometer (HIRES) in Hawaii, and the Hubble Space Telescope’s Cosmic Origins Spectrograph (COS) and Space Telescope Imaging Spectrograph (STIS).

The team’s results were presented at an American Astronomical Society (AAS) press conference on Wednesday, June 15, 2022.

The Hubble Space Telescope is a project of international cooperation between NASA and ESA (European Space Agency). NASA’s Goddard Space Flight Center in Greenbelt, Maryland, manages the telescope. The Space Telescope Science Institute (STScI) in Baltimore, Maryland, conducts Hubble science operations. STScI is operated for NASA by the Association of Universities for Research in Astronomy, in Washington, D.C.