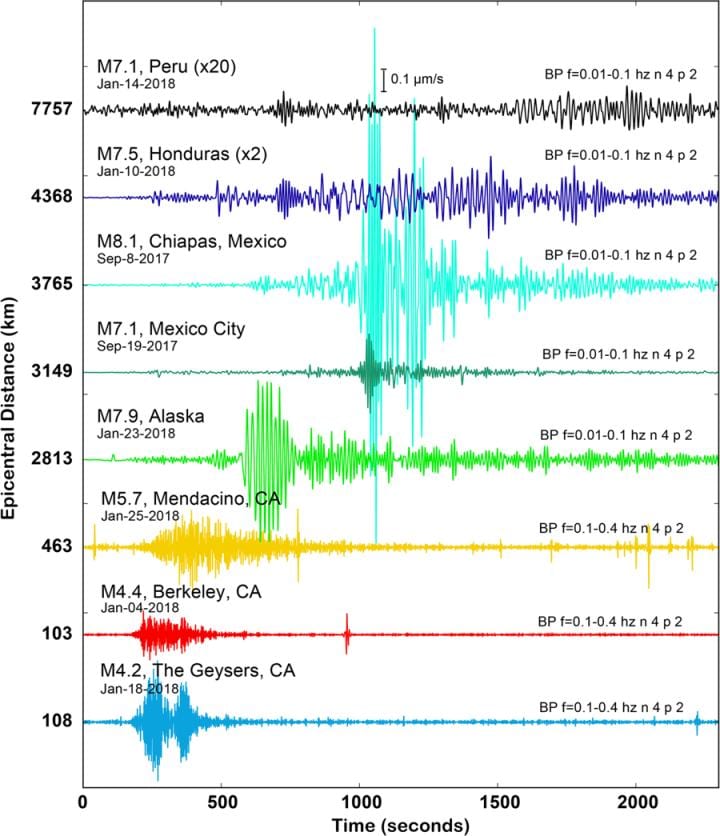 In traditional seismology, researchers studying how the earth moves in the moments before, during, and after an earthquake rely on sensors that cost tens of thousands of dollars to make and install underground. And because of the expense and labor involved, only a few seismic sensors have been installed throughout remote areas of California, making it hard to understand the impacts of future earthquakes as well as small earthquakes occurring on unmapped faults.

Now researchers at the U.S. Department of Energy’s Lawrence Berkeley National Laboratory (Berkeley Lab) have figured out a way to overcome these hurdles by turning parts of a 13,000-mile-long testbed of “dark fiber,” unused fiber-optic cable owned by the DOE Energy Sciences Network (ESnet), into a highly sensitive seismic activity sensor that could potentially augment the performance of earthquake early warning systems currently being developed in the western United States. The study detailing the work – the first to employ a large regional network as an earthquake sensor – was published this week in Nature’s Scientific Reports.

Shaking up seismology with dark fiber

According to Jonathan Ajo-Franklin, a staff scientist in Berkeley Lab’s Earth and Environmental Sciences Area who led the study, there are approximately 10 million kilometers of fiber-optic cable around the world, and about 10 percent of that consists of dark fiber.

The Ajo-Franklin group has been working toward this type of experiment for several years. In a 2017 study, they installed a fiber-optic cable in a shallow trench in Richmond, California, and demonstrated that a new sensing technology called distributed acoustic sensing (DAS) could be used for imaging of the shallow subsurface. DAS is a technology that measures seismic wavefields by shooting short laser pulses across the length of the fiber. In a follow-up study, they and a group of collaborators demonstrated for the first time that fiber-optic cables could be used as sensors for detecting earthquakes.

The current study uses the same DAS technique, but instead of deploying their own fiber-optic cable, the researchers ran their experiments on a 20-mile segment of the 13,000-mile-long ESnet Dark Fiber Testbed that extends from West Sacramento to Woodland, California. “To further verify our results from the 2017 study, we knew we would need to run the DAS tests on an actual dark fiber network,” said Ajo-Franklin, who also heads Berkeley Lab’s Geophysics Department.

“When Jonathan approached me about using our Dark Fiber Testbed, I didn’t even know it was possible” to use a network as a sensor, said Inder Monga, Executive Director of ESnet and director of the Scientific Networking Division at Berkeley Lab. “No one had done this work before. But the possibilities were tremendous, so I said, ‘Sure, let’s do this!”

Chris Tracy from ESnet worked closely with the researchers to figure out the logistics of implementation. Telecommunications company CenturyLink provided fiber installation information.

Because the ESnet Testbed has regional coverage, the researchers were able to monitor seismic activity and environmental noise with finer detail than previous studies.

“The coverage of the ESnet Dark Fiber Testbed provided us with subsurface images at a higher resolution and larger scale than would have been possible with a traditional sensor network,” said co-author Verónica Rodríguez Tribaldos, a postdoctoral researcher in Ajo-Franklin’s lab. “Conventional seismic networks often employ only a few dozen sensors spaced apart by several kilometers to cover an area this large, but with the ESnet Testbed and DAS, we have 10,000 sensors in a line with a two-meter spacing. This means that with just one fiber-optic cable you can gather very detailed information about soil structure over several months.”

After seven months of using DAS to record data through the ESnet Dark Fiber Testbed, the researchers proved that the benefits of using a commercial fiber are manifold. “Just by listening for 40 minutes, this technology has the potential to do about 10 different things at once. We were able to pick up very low frequency waves from distant earthquakes as well as the higher frequencies generated by nearby vehicles,” said Ajo-Franklin. The technology allowed the researchers to tell the difference between a car or moving train versus an earthquake, and to detect both local and distant earthquakes, from Berkeley to Gilroy to Chiapas, Mexico. The technology can also be used to characterize soil quality, provide information on aquifers, and be integrated into geotechnical studies, he added.

With such a detailed picture of the subsurface, the technology has potential for use in time-lapse studies of soil properties, said Rodríguez Tribaldos. For example, in environmental monitoring, this tool could be used to detect long-term groundwater changes, the melting of permafrost, or the hydrological changes involved in landslide hazards.

The current study’s findings also suggest that researchers may no longer have to choose between data quality and cost. “Cell phone sensors are inexpensive and tell us when a large earthquake happens nearby, but they will not be able to record the fine vibrations of the planet,” said co-author Nate Lindsey, a UC Berkeley graduate student who led the field work and earthquake analysis for the 2017 study. “In this study, we showed that inexpensive fiber-optics pick up those small ground motions with surprising quality.”

With 300 terabytes of raw data collected for the study, the researchers have been challenged to find ways to effectively manage and process the “fire hose” of seismic information. Ajo-Franklin expressed hope to one day build a seismology data portal that couples ESnet as a sensor and data transfer mechanism, with analysis and long-term data storage managed by Berkeley Lab’s supercomputing facility, NERSC (National Energy Research Scientific Computing Center).

Monga added that even though the Dark Fiber Testbed will soon be lit for the next generation of ESnet, dubbed “ESnet 6,” there may be sections that could be used for seismology. “Although it was completely unexpected that ESnet – a transatlantic network dedicated for research – could be used as a seismic sensor, it fits perfectly within our mission,” he said. “At ESnet, we want to enable scientific discovery unconstrained by geography.”

The research was funded by Laboratory Directed Research and Development Funding with earlier research supported by the Strategic Environmental Research and Defense Program (SERDP), U.S. Department of Defense.

ESnet, a DOE Office of Science user facility, is a high-performance, unclassified network built to support scientific research. It is managed by Berkeley Lab.

For more information, see:
“Dark Fiber: Using Sensors Beneath Our Feet to Tell Us About Earthquakes, Water, and Other Geophysical Phenomena”

Self-driving cars and geospatial data: Who holds the keys?

A bathroom scale could monitor millions with heart failure