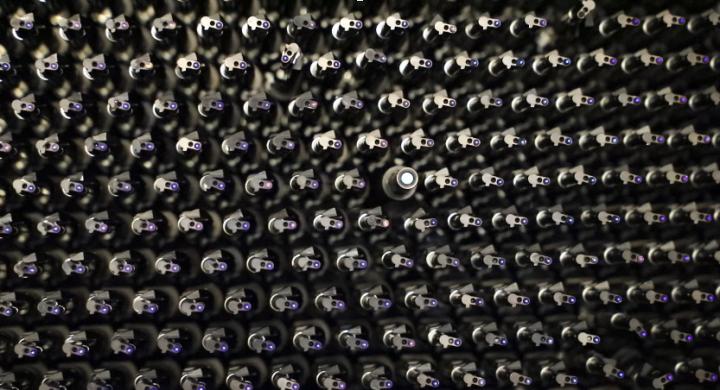 A five-year quest to map the Universe and unravel the mysteries of ‘dark energy’ began officially on May 17 at Kitt Peak National Observatory near Tucson, Arizona. To complete its quest, the Dark Energy Spectroscopic Instrument (DESI) will capture and study the light from tens of millions of galaxies and other distant objects in the Universe.

DESI is an international science collaboration managed by the Lawrence Berkeley National Laboratory (Berkeley Lab) with primary funding from the U.S. Department of Energy (DOE) Office of Science. The Chinese Participant Group (CPG) organized by National Astronomical Observatories, Chinese Academy of Science (NAOC) has joined in the DESI collaboration through the imaging contribution of the Beijing-Arizona Sky Survey (BASS).

ZOU Hu, who is the duty-PI of BASS and NAOC representative in DESI, said, “The BASS team at NAOC has spent about five years in collecting the astronomical images in the northern sky, which paves the way for the DESI spectroscopic survey. Now the DESI sets sail to explore the universe.” ZOU added, “The DESI is a really spectra factory that can collect 5,000 spectra every 20 minutes.”

What sets DESI apart from previous sky surveys? The project director, Berkeley Lab’s Michael Levi, said, “We will measure 10 times more galaxy spectra than ever obtained. These spectra get us a third dimension.” Instead of two-dimensional images of galaxies, quasars, and other distant objects, he explained, the instrument collects light, or spectra, from the cosmos such that it “becomes a time machine where we place those objects on a timeline that reaches as far back as 11 billion years ago.”

“It’s been a long journey from the first steps that we took almost a decade ago to design the survey then to decide which targets to observe, and now to have the instruments so that we can achieve the science goals,” said project co-spokesperson Nathalie Palanque-Delabrouille. She added “It’s very exciting to see where we stand today.”

The group leader of the Sky Survey and TMT Development at NAOC, XUE Suijian, said, “Scores of researchers around the world have tested thousands of DESI’s component parts and validated the survey.” He added, “After completing the imaging surveys, NAOC members have been involved in the DESI commissioning and survey validations during the past two years.”

The formal start of DESI’s five-year survey follows a four-month trial run of its custom instrumentation that captured spectra from four million galaxies – more than the combined output of all previous spectroscopic surveys.

The DESI instrument includes 5,000 robotically controlled optical fibers to gather spectroscopic data from an equal number of objects. Spectra collected by DESI are the components of light corresponding to the colors of the rainbow. Their characteristics, including wavelength, reveal information such as the chemical composition of objects being observed as well as information about their relative distance and velocity.

As the Universe expands, galaxies move away from each other, and their light is shifted to longer, redder wavelengths. The more distant the galaxy, the greater its “redshift.” By measuring galaxy redshifts, DESI researchers will create a 3D map of the Universe. The detailed distribution of galaxies in the map is expected to yield new insights on the influence and nature of dark energy.

NAOC astronomers will further participate in the DESI observing, cooperate with the scientists from the DESI collaboration, and utilize the DESI spectra to understand the special types of stars and galaxies, galaxy evolution, and cosmology, etc.