Dance that adapts to disabilities 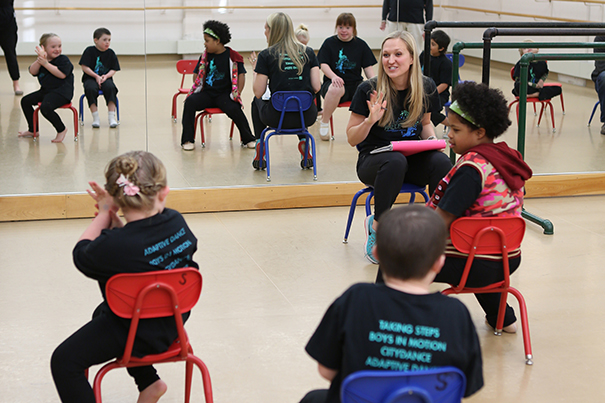 At first glance, the 5- and 6-year-olds practicing dance on a Saturday afternoon in Portia Abernathy’s adaptive dance class at the Boston Ballet just seem to be having a good time.

But, through their arm and leg movements, marching, and tapping their hands, the children, who all have Down syndrome, are doing more than simply having fun. In fact, Abernathy, Ed.M.’11, C.A.S.’12, a longtime special education teacher who first began using movement in her public school classroom, sees dance as an important learning tool for children with disabilities.

“Within 10 weeks and over the year, there is a lot of growth and progression for younger students, who learn to skip, jump, hop, or even to sustain attention like waiting to take turns,” says Abernathy, senior manager of education and inclusion at Boston Ballet’s Adaptive Dance Program.

Started in 2002, the program offers creative movement instruction for disabled individuals ages 2 through adult. The goal — besides having fun, of course — is for students to engage and explore movement and musicality, and to grow personally and socially in a safe environment. The classes are taught by special education instructors like Abernathy, physical therapists, professional dancers, and professional musicians. Currently, 130 students participate in the Adaptive Dance Program’s 14 classes, which include classes for children with autism and children with disabilities such as Down syndrome, and an inclusive dance course.

The results have been powerful for the children who, by engaging in dance and music, learn how to follow directions, focus, balance, distinguish right from left, and develop a concept of music and rhythm, as well as how to work well with others. The physical, cognitive, and social-emotional skills they develop are critical for all children, Abernathy says.

“We know that those foundational skills and the feelings of self-efficacy and self-esteem that come from doing something you love and feel like you’re good at are transferable to other settings, so success in one setting can lead to success in other settings,” she says. “In the case of adaptive dance, I think it is more about ensuring that all individuals have access to the same experiences as their typical peers, and this includes dance.”

It was Abernathy’s experience growing up in Iowa and watching her aunt with Down syndrome lead an independent life that inspired her future in special education.

“There were never any limits placed on her because of her disability,” she says, noting that her aunt was expected to achieve everything her sisters did, with the understanding that it might be at a slower pace and require additional support. “When she was born, the doctor asked my grandmother which state institution she wanted to place [my aunt] in, and when my grandmother refused most people thought she was crazy. Without limitations and lowered expectations she was able to achieve a full and independent life.”

Abernathy realizes that many people with disabilities are not always fortunate to have advocates. “As I grew up and learned more about education, it also became clear that much of [my aunt’s] success could be attributed to living in a family with savvy, well-resourced advocates and parents who had privilege and access that could help ensure that her needs were being met and that she wasn’t denied opportunities” she says. “This is not the case for a lot of students — with and without disabilities — and understanding those patterns of inequity and [the] gaps in achievement is what led me to pursue special education. I felt I had an opportunity to create change.”

The power of movement

Initially, Abernathy became a special education teacher through Teach For America. While placed in Denver Public Schools, she discovered the power of movement on her students. As a teacher to third-, fourth-, and fifth-graders with emotional and behavioral disabilities, she began to experiment using movement to engage her young students. She noticed the effect of movement on students was more than physical; it was cognitive, too. “When we tied movement to memorizing or learning an academic concept — for example, angles, parallel and perpendicular lines — there was greater retention and deeper understanding of the concept,” she says.

When Abernathy began looking for research on the topic, she found that there wasn’t much, even though an estimated 80 percent of children with disabilities identify as kinesthetic — or tactile — learners. Her desire to understand more about special education and educational inequality led her to GSE, where she studied in the Prevention Science and Practice Program (PSP) and earned a certificate of advanced study (C.A.S.). Through her studies at Harvard, Abernathy gained a deeper understanding of the complex and contextual factors that influence students, families, and learning.

“In special education there is still a tendency to define students and their needs using only their label, and that really over-simplifies who they are, how they learn, and what is necessary for them to succeed,” she says. “PSP and C.A.S. courses and faculty taught me to always use a strengths-based approach that focuses on all of things students can do and then capitalize on those attributes to promote academic, social, and emotional growth.”

Abernathy returned to the school setting in a grant-funded position soon after graduating HGSE, but when it wasn’t re-funded she began searching for work. That is when she pursued the position at Boston Ballet.

“It is an opportunity to see education and arts together,” she says. “The work the department was doing greatly aligned with work I was interested in doing.”

At Boston Ballet’s Adaptive Dance Program, Abernathy oversees all the education programs and advises the institution on inclusion and accessibility. But the best part of her job is having the opportunity to teach children with disabilities — some nonverbal — and watch them grow, learn, and change, some becoming so engaged with dance that their demeanor changes.

“They are excited to come to class,” Abernathy says. “They start waking up in the morning and saying, ‘Ballet.’”