Dairy calves use brushes for more than combing their hair!

Philadelphia, October 19, 2021 – Dairy cows have a natural drive to groom themselves and to scratch those hard-to-reach itches on their bodies. When given the opportunity, dairy cattle use mechanical brushes daily at every stage of their lives. A new study in the Journal of Dairy Science®, conducted by researchers from the Animal Welfare Program, Faculty of Land and Food Systems, University of British Columbia, Vancouver, Canada, is the first to characterize the use of stationary brushes among weaned dairy heifers. 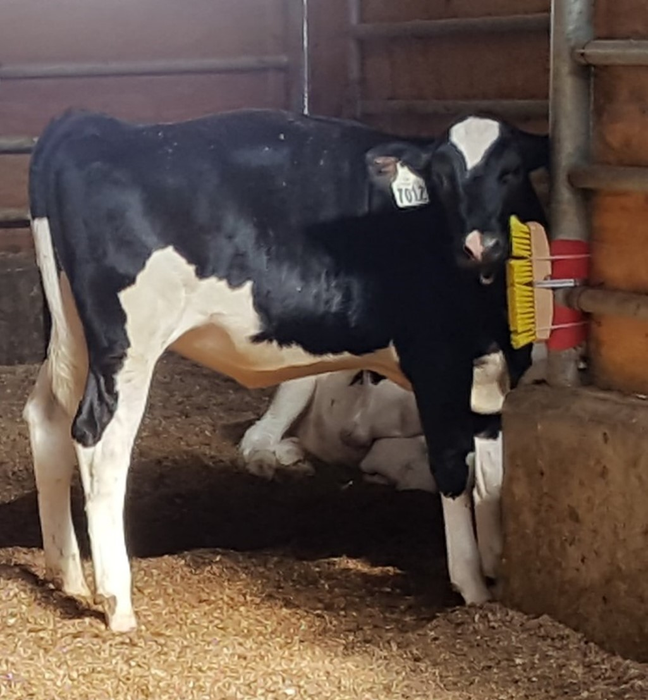 Philadelphia, October 19, 2021 – Dairy cows have a natural drive to groom themselves and to scratch those hard-to-reach itches on their bodies. When given the opportunity, dairy cattle use mechanical brushes daily at every stage of their lives. A new study in the Journal of Dairy Science®, conducted by researchers from the Animal Welfare Program, Faculty of Land and Food Systems, University of British Columbia, Vancouver, Canada, is the first to characterize the use of stationary brushes among weaned dairy heifers.

Cows with no access to brushes tend to rub their heads and bodies against pen walls and the edges of water troughs, risking injury. Additionally, young cattle appear to be motivated to manipulate objects with their mouths. Past studies have found that young cattle that had access to stationary brushes or hanging hemp ropes, which they could manipulate orally, showed reduced levels of abnormal, non-nutritive and potentially harmful oral behaviors, such as tongue rolling and sucking on wire mesh pen walls and other pen hardware.

Providing access to brushes in their housing environment is thus a welfare issue for cattle. However, weaned dairy heifers are often housed in simple environments with few appropriate outlets for grooming or oral manipulation and other natural behaviors. Rotating brushes allow cattle to groom hard-to-reach areas of the body, but stationary brushes may be more economical and offer opportunities for other behaviors, such as oral manipulation.

Lead investigator Marina von Keyserlingk, PhD, noted that, “Although providing brushes for dairy cattle is becoming more common, providing objects for oral manipulation has been underexplored. This appears to be an important behavior for young cattle.” Therefore, this study examined not only grooming, but also oral behaviors focused on the brushes, as well as exploring heifers’ preferences for type and placement of brushes.

In phase 1 of the study, four rectangular scrub brushes were attached to the fence surrounding an experimental group pen housing four heifers at a time. This phase also investigated whether the heifers preferred softer or stiffer bristles, vertical or horizontal orientation of the brushes, or any particular location of the brushes within the pen. In phase 2 of the experiment, the heifers were moved to freestalls either with a scrub brush mounted horizontally to the front stall rail or with no brushes. After five days, brushes were added to the stalls that formerly had not had any to examine any effects after this period of deprivation. Both phases of the experiment used video cameras mounted in the pen or stalls for recording and observation of behaviors.

The research team found that heifers began using the brushes almost immediately, even though they had never been exposed to brushes before. In the first phase, brushes were used primarily for grooming (approximately 60% of brush use), mainly of the head, but the heifers displayed a large amount of oral brush manipulation as well (approximately 40%). After a peak on the first day in the pen, brush use was steady throughout this stage, and all heifers in the pen at any time used each brush at least once. In phase 2, the majority (approximately 75%) of brush use was oral manipulation. The heifers initially deprived of brushes during this phase showed more brush use after they were added back into the stalls (about three times more than the heifers who had access to brushes all along), in a rebound effect.

Oral manipulation of brushes in all stages of the experiment remained consistent over time, reinforcing the team’s view that this is an important behavior for young cattle. Additionally, the lack of differences in use of brushes with different bristle stiffness and horizontal versus vertical orientation suggests that the type of brushes provided may be less important than whether they are provided at all.

“In our study, the patterns of brush use across days suggest that stationary brushes are functionally relevant to the natural behavior of heifers and hold their interest over time, important characteristics for relevant environmental enrichments,” said von Keyserlingk. “Given recent evidence indicating that adult cows are highly motivated to access brushes, depriving cattle of such resources could have negative effects on their welfare.”