Pseudomonas aeruginosa (P.a.) are resistant to most antibiotics and cause life-threatening infections of wounds or the lungs. The P.a. bacteria species has an entire arsenal of strategies for evading the immune system and infecting tissue. Researchers working with Prof. Dr. Winfried Römer and Dr. Carsten Schwan of the University of Freiburg and the Excellence Cluster CIBSS – Centre for Integrative Biological Signalling Studies – have identified a previously unknown, natural, defense mechanism that protects cells from Pseudomonas infection. The study has been published in Cell Reports. 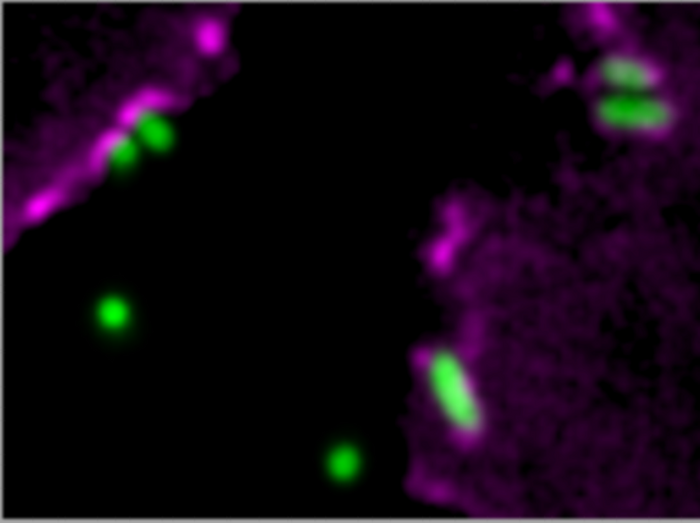 Pseudomonas aeruginosa (P.a.) are resistant to most antibiotics and cause life-threatening infections of wounds or the lungs. The P.a. bacteria species has an entire arsenal of strategies for evading the immune system and infecting tissue. Researchers working with Prof. Dr. Winfried Römer and Dr. Carsten Schwan of the University of Freiburg and the Excellence Cluster CIBSS – Centre for Integrative Biological Signalling Studies – have identified a previously unknown, natural, defense mechanism that protects cells from Pseudomonas infection. The study has been published in Cell Reports.

Surrounded by nutrients and undetected by the immune system, the interior of a cell is the ideal place for pathogenic bacteria to reproduce. Nevertheless, it was long thought that they existed outside of cells for the most part. “In the meantime, it’s clear that the picture is more complex and the bacteria target the cells they penetrate,” explains Römer. With the aid of live cell imaging microscopy, this can be observed in the laboratory. The bacteria take up close contact to the cell and make indentations in its membrane until they are completely engulfed by it.

Pseudomonas triggers the denting of the cell’s membrane by binding the virulence factor LecA to sugar molecules on the membrane’s surface. Proteins that bind with sugars are common in the natural world and are also observed on other bacteria and viruses. The strong binding of the bacteria and host cells leads to the cell membrane closing itself like a zipper around the bacteria – a process that Römer’s working group has been examining for quite some time.

“Now we’ve intentionally focused on the role septins play in Pseudomonas infection,” says Schwan, describing the objective of the current study. “It’s known of other bacteria that they manipulate host cell septins and can exploit them to ease penetration. Yet at the same time, septins can also encapsulate bacteria that have already penetrated and induce their liquidation, so they have an ambivalent function in infections,” Schwan continues. Septins are part of the cytoskeleton and serve as a key structural element similar to a modular scaffold that can be flexibly put together and taken apart. They also frequently play a role precisely when curved membranes are involved.

The binding of LecA is sufficient to induce septin accumulation

In their latest study, the researchers used human lung cells that they infected with Pseudomonas aeruginosa in the lab. They found the attachment of the bacteria led to septins gathering at the site within a few seconds or minutes. If the bacteria failed to penetrate, the accumulation then dissolved again quickly. The researchers could also observe this effect when instead of bacteria small polymer beads coated with LecA were given to the cells. This showed that binding via LecA was enough to induce septin accumulation.

“We expected that Pseudomonas wanted this accumulation of septins, and that it helped them during infection, just as with other types of bacteria,” adds Schwan. Instead, they found that twice as many bacteria could penetrate when the researchers knocked down some of the septins. “We were surprised by the results at first, but now we’re thinking it’s not just an isolated case. It could be that septins also play a protective role with many other pathogens,” he concludes.

A basis for developing drugs to treat antibiotic-resistant bacteria

The researchers were able to measure the strength of the septin barrier in further experiments. To do this, they attached the minimal bacterial model to the cantilever of an atomic force microscope (AFM), which allows the tiniest of indentations and resistances on surfaces to be measured as force. The researchers discovered that the cell membrane was clearly more rigid locally when the polymer beads were coated with LecA and septin accumulated.

“That’s an enormous effect when you consider that during the infection process, many different molecules are involved. For an intervention to have such great impact, you often have to inhibit several factors, because otherwise, compensations are made,” says Römer. He continues, “That speaks strongly for septins really playing a significant role in warding off infections here.” The researchers now intend to further their investigations of lectins and septins. Better understanding of these proteins could aid in finding points of attack for drugs designed to prevent infection by antibiotic resistant bacteria.

About the Cluster of Excellence CIBSS

The Cluster of Excellence CIBSS – Centre for Integrative Biological Signalling Studies has the goal of gaining a comprehensive understanding of biological signaling processes across scales – from interactions between individual molecules and cells to processes in organs and entire organisms. Researchers use the knowledge thus gained to develop strategies for controlling signals in a targeted manner. These technologies enable them not only to gain insights in research but also to develop innovations in medicine and plant sciences.