Stem cell researchers may soon have a new way to identify and develop novel, personalized therapies for patients with Cystic Fibrosis (CF) who lack effective treatments. 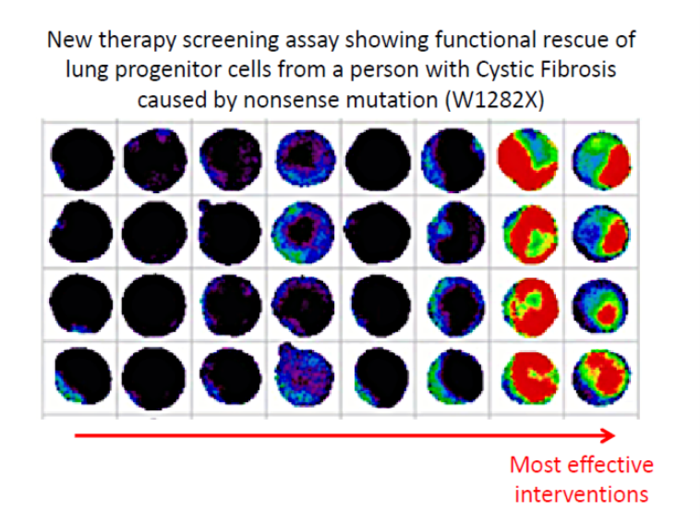 Stem cell researchers may soon have a new way to identify and develop novel, personalized therapies for patients with Cystic Fibrosis (CF) who lack effective treatments.

Currently, not all CF patients have access to effective treatments, especially those with very rare CF-causing mutations. To identify new therapies for these people, precursor lung cells (cells not fully developed yet) grown from a patients’ own reprogrammed blood cells can be used to screen for new drugs and the best drug responses validated in their own mature airway (nasal) cells. This “drug screening in a dish” can reduce the time and improve the outcomes for CF treatments.

Cystic fibrosis (CF) is a genetic disease with 1,000 new cases being diagnosed in the United States per year (there are about 30,000 individuals in the US and more than 70,000 individuals worldwide with CF), leading to decreased quality of life and shortened life expectancy due to persistent lung infection and inflammation, and dysfunctions in other organs. CF is caused by mutations in one specific gene, where 2,500 different mutations in that gene have been described and at least 450 are known to be disease-causing in patients. Although treatments for CF are available, the response to these treatments varies considerably from patient to patient, depending on the specific mutation the patient carries as well as on other genetic background factors.

A personalized medicine approach, where tissue from individual patients is used to screen for new drugs in the lab, would greatly benefit those patients who do not currently respond well to available medication. Research from Christine Bear (Hospital for Sick Children and University of Toronto, Canada) and colleagues published in Stem Cell Reports used the open Canadian resource called CFIT, to grow tissues from CF patients in the lab in a format amenable to high throughput screening.

Their work generated precursor lung cells from induced pluripotent stem cells (iPSC) made from the patient’s blood through a process called reprogramming. Consequently, these iPSC-lung cells contain the specific CF-causing mutation and genetic background specific for each patient. The iPSC-precursor lung cells can be grown in large quantities in the lab, affording sufficient cells for drug screens in new high-throughput format. Encouragingly, responses of iPSC-precursor lung cells to chemical compounds closely reflected responses measured in nasal epithelial cells from the same patient. The researchers expect that based on these results, patient-derived iPSC-lung cells will enable the screen of large drug libraries or biologics like mRNA, to help identify new therapies particularly for those patients with no access to effective therapies.