CubeSats prove their worth for scientific missions

They may be small, but CubeSats are mighty when it comes to affordably obtaining scientific data in space 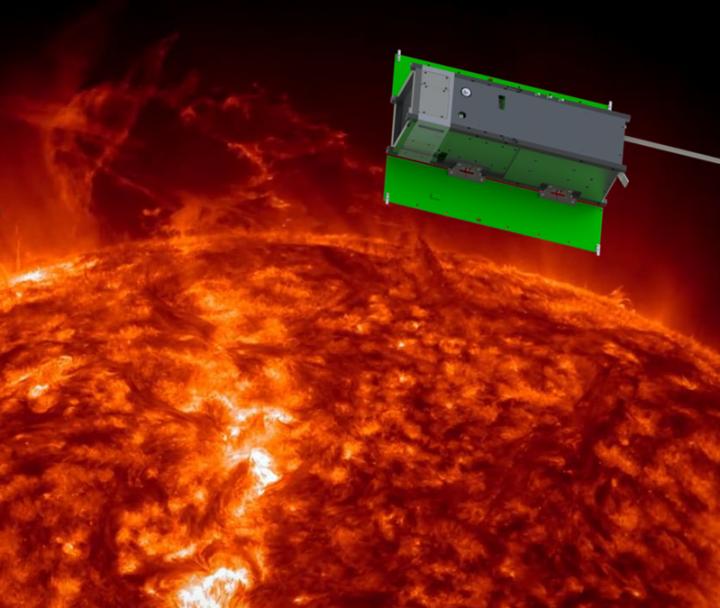 WASHINGTON, D.C., April 16, 2019 — Only a few years ago, the astronomy and heliophysics communities were skeptical about whether CubeSats could reliably obtain scientific data. But these breadloaf-size satellites have proven their ability to return useful data.

During the American Physical Society’s April Meeting 2019, being held April 13-16, in Denver, Colorado, Christopher S. Moore, a postdoctoral fellow at the Harvard-Smithsonian Center for Astrophysics in the Solar and Stellar X-ray Group, will describe how the twin Miniature X-ray Solar Spectometer (MinXSS) CubeSats measure soft X-rays from the Sun. These were the first solar science-oriented CubeSat missions flown for the NASA Science Mission Directorate.

As he will describe at the meeting, Moore was one of several dozen graduate students who contributed to MinXSS over its lifetime. He worked on the MinXSS CubeSats as part of his doctoral research at the University of Colorado Boulder.

“This work demonstrated that these small, relatively cheap — ranging from $1 million to $2 million for MinXSS — CubeSats can collect data that fills a specific niche and is consistent with large satellites, which are much more expensive, and contribute to major science investigations,” said Moore.

MinXSS-1 was launched in December 2015 on the Atlas-V Cygnus OA-4 Launch, Orbital ATK resupply mission to the International Space Station, where it was deployed for an approximately 12-month orbit around Earth. The second version, MinXXS-2, was launched on the SpaceX Falcon 9 as part of the Spaceflight SSO-A: SmallSat Express in December 2018 and deployed for a four- to five-year orbit and operation.

Science-oriented CubeSats are low-cost, short-lifespan satellites built to take specific scientific observations and measurements. MinXSS, for example, features cost-saving components such as an extendable tape measure that serves as a radio antenna.

Its science payload consists of a soft X-ray spectrometer that was modified for compatibility with the harsh environment of space. MinXSS is also carrying silicon-based photometers onboard for other soft X-ray and visible light measurements.

The NASA-funded MinXSS-1 (the first of the twin satellites) was the initial test of the Blue Canyon Technologies XACT, which is a miniaturized attitude determination and control system. The success of MinXSS-1 and XACT resulted in the SmallSat 2016 Mission of the Year award.

“MinXSS measures solar soft X-rays between 0.5 to 12 kiloelectron volts at moderate spectral resolution, which includes the sparsely observed 0.5- to 2-keV bandpass,” explained Moore. “This spectral region is highly informative of the solar atmospheric plasma conditions for temperatures greater than 2 million kelvin present in solar flares and during quiescence (dormancy).”

The data collected by MinXSS has been consistent with inferences from large satellites. “MinXSS data will help us understand the physics behind solar flares,” Moore said. “The soft X-rays carry information about the temperature, density and chemical composition of material in the Sun’s atmosphere, which allows scientists to trace how events like flares and other processes during calmer times heat the surrounding material in the corona, the Sun’s atmosphere.”

APS will provide free registration to all staff journalists representing media organizations, professional freelance journalists on assignment, and student journalists who are attending the meeting for the express purpose of gathering and reporting news and information. Press registration grants full access to all scientific sessions, to the press room, and to the press conferences. We will also provide complimentary press registration to university press officers, PIOs and other professional media relations staff.

Press registration grants full access to all scientific sessions, to the press room, and to the press conferences. Press credentials are approved at the sole discretion of APS. For press related questions about the APS April Meeting, email [email protected]>.

The American Physical Society is a nonprofit membership organization working to advance and diffuse the knowledge of physics through its outstanding research journals, scientific meetings, and education, outreach, advocacy, and international activities. APS represents over 55,000 members, including physicists in academia, national laboratories, and industry in the United States and throughout the world. Society offices are located in College Park, Maryland (Headquarters), Ridge, New York, and Washington, D.C. https://www.aps.org/

Biological diversity as a factor of production