The new tool, designed at the IQAC-CSIC, can help to understand the origin of some diseases and the development of new drugs 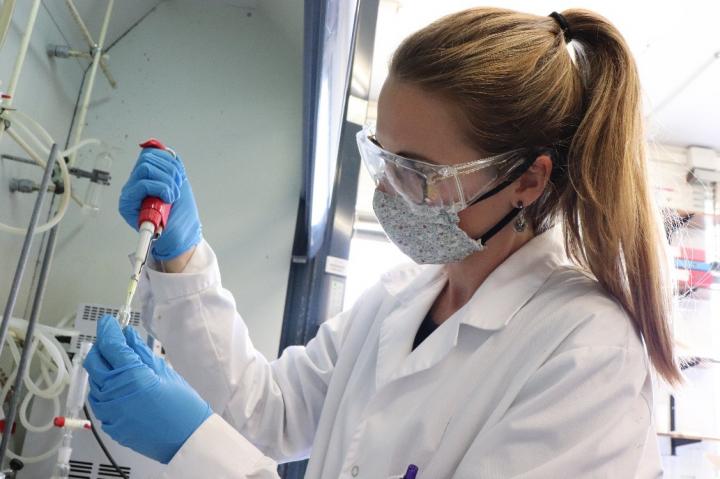 A study performed by researchers at the Institute for Advanced Chemistry of Catalonia (IQAC-CSIC) from the Spanish National Research Council (CSIC) in collaboration with Stony Brook University (USA) proposes a new strategy for the development of new drugs based on the inhibition of tyrosine kinase enzymes, molecules that activate and trigger many cellular processes. The results have been published in the Chemistry – A European Journal.

The new approach is based on the regulation of the signaling cascade of tyrosine kinases, and could lead to the development of improved and more selective tools for research, diagnosis or treatment of some diseases.

Tyrosine kinases are a set of enzymes that are essential for communication between the cells of our body, which trigger biochemical reactions that are important for life. “The dysfunction of these enzymes is related to serious diseases such as diabetes, some neurological disorders and many types of cancer,” explains Ignacio Alfonso, a researcher at the IQAC-CSIC.

Cell signaling is the process by which cells communicate. In the cell there are many types of receptors or specific proteins that recognize the proteins synthesized by the body and make the cell respond to them. One of the most important are tyrosine kinases.

“Cells receive signals from the environment when a molecule (a hormone, for example) binds to one of these receptors. The receptor recognizes the molecule and triggers a series of chemical reactions”, explains Alfonso. This allows cells to work to control vital functions of the body, such as cell multiplication or destruction. Each process has its own signaling path. After the first molecule in the signaling pathway receives the signal, another molecule is activated, then another and another, and so on throughout the signaling cascade until cellular function is fulfilled. “The abnormal activation of signaling pathways can lead to diseases, such as cancer”, says the researcher.

Kinases are a family of molecules that activate many different signaling pathways, which implies that they themselves participate in all of these processes. “When you want to avoid any of these processes, a research strategy is to inhibit kinases, blocking them with synthetic molecules. But this strategy is not very selective, since other important pathways may be inhibiting,” warns Alfonso. In fact, the similarity between kinases and their functional versatility (the same kinase acts on different molecules and is involved in different processes) has made it difficult to design specific inhibitors to modulate pathological situations or dissect different functions in basic research.

Target: the place where kinases act

It is here where this work proposes an alternative strategy: not to inhibit the kinases, but to cover and block the molecules on which the kinases act. The tool for this would be artificial synthetic receptors, that is, synthetic molecules that would protect the place where the kinases exert their action. “Our group has designed molecules that interact with the substrates of the kinase, and not with the kinase” explains Alfonso. “We have prepared artificial molecular ‘cages’, made up of pseudopeptides, that are able to modulate the activity of these enzymes” clarifies the researcher.

“This complementary approach paves the way for selective modulation of an individual kinase-stimulated signaling pathway, without interfering with other functions of the kinase,” explains Todd Miller from Stony Brook University. “This technology would enable investigators to dissect the contributions of specific signaling pathways in cellular function”.

Despite being a proof-of-concept study, the results of this study could lead to more selective modulators/inhibitors of these kinases that would be used as research tools for the full understanding of this complex communication network. “This approach generates basic knowledge, which could be essential to better understand key biological functions and the origin of many diseases”, concludes Dr. Alfonso.