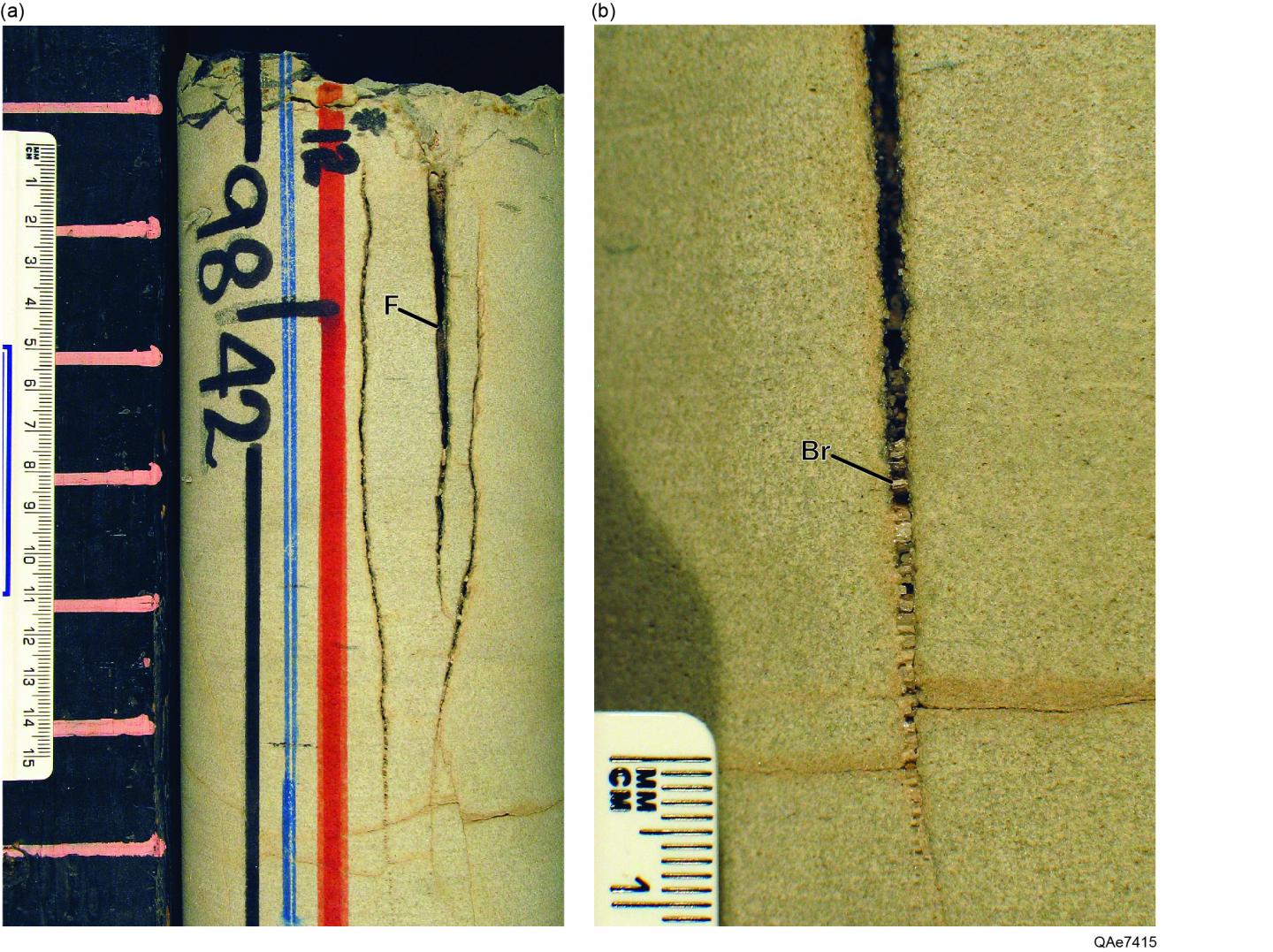 They are the cracks in the sidewalk. The rifts in roadcuts. The spidery textures in brick and boulders. And those are just the fractures visible at the surface. Underground, fractures can spread throughout rocks creating complex networks that stretch for miles.

Understanding how fractures form and where they are located are fundamental questions in geosciences with important implications for everyday life. Fractures influence how much oil and gas can flow from a shale play. They may control where groundwater is plentiful or hard to come by, and whether carbon dioxide injected underground will stay put or leak back into the atmosphere where it can contribute to climate change.

Most scientists have sought answers to these questions through subsurface observations and mechanics-based research. But these approaches have not been successful in answering even basic questions about fractures in deeper, hotter environments. Answering these questions is vital for making more accurate predictions of subsurface fracture patterns and better engineering decisions.

A research group led by The University of Texas at Austin is challenging the current scientific paradigm by arguing that mechanics alone is not enough. To make progress on fracture research, scientists need to start considering the role of chemistry.

The researchers published a paper in August 2019 in the journal Reviews of Geophysics making the case for adopting a chemical perspective to understand how fracture patterns develop. For example, recently published research shows that minerals lining the insides of fractures can record important evidence about when and why fractures form. The crystal coatings may also influence the fracturing process itself. Chemical analysis, experimentation, modeling, and theory have the potential to increase scientists’ understanding of how fracture patterns develop at different geological time scales, said lead author Stephen Laubach, a senior research scientist at the UT Bureau of Economic Geology, a research unit of the Jackson School of Geosciences.

“They are hot rocks with hot fluid in them, so they are enormously chemically reactive environments,” Laubach said.

Laubach is the leader of the fracture and diagenesis program at the bureau and co-authored the paper with 18 other collaborators. The paper builds on ideas discussed at a 2016 workshop on the chemistry of fracture pattern development sponsored by the Department of Energy Office of Basic Energy Sciences.

From mountain peaks to miles-deep rock formations, fractures are the most common rock structures in many geological settings. Their sheer abundance influences the strength of the surrounding rock and fluid flow. However, the superficial simplicity of fractures is also what makes them such a difficult problem to solve. With mechanics and geometry alone, it is practically impossible to tease out the processes that drove the formation of one fracture versus another. Chemistry provides the needed context to make these distinctions.

“With a simple opening-mode fracture, it could have formed by so many different processes,” Laubach said. “When you see a fracture in a piece of core, you can’t tell when it formed or why it formed, specifically. You have little to go on to infer what the patterns are away from the wellbore.”

In the paper, the authors explain how chemistry can offer more specificity in the factors that shape fractures, with the research focusing on fractures that form from 1-10 kilometers beneath the surface.

Fractures in these environments frequently host mineral deposits inside of them. Since different minerals form under specific conditions, the mineral coatings serve as a record of rock environments over time. The minerals themselves can also impact both the fracturing process and the extent which fluid can flow through fracture networks.

Laubach said that analyzing fracture chemistry has already led to important discoveries. For example, bureau research found that a fracture network in East Texas has been slowly and steadily growing for about 50 million years – much longer than expected. And Jackson School of Geosciences alumnus Abdulaziz Almansour (who earned a master’s degree from the school’s Energy and Earth Resources program in 2017) recently published a paper based on his thesis research that uses chemical analysis of host rock to successfully predict how fractures could either enhance or block oil production based on whether they are sealed by mineral cements or open and able to serve as conduits for hydrocarbons.

However, despite the great potential for chemistry to shed light on fracture behavior, Laubach said that a chemical approach is still a relatively unusual perspective that needs more research across the board.

“We suspect that probably a whole generation of observational and experimental work is needed, either with analog materials or at elevated temperatures working with chemical reactions where reactions such as precipitation are happening,” he said. “In the 60s, there was a very big push for lab-related fracture mechanics. I think we’re probably due for another round of that.”

Giovanni Bertotti, a fracture researcher who was not involved with the publication and the head of section of Civil Engineering and Geosciences at the Delft University of Technology, called the paper a “milestone” and said that he expects the article to be read by a wide range of people in both academia and industry.

“The paper by Laubach et al. is an outstanding overview of present knowledge on these fracture systems and an inspiring view of future challenges,” he said.

The research was funded by the U.S. Department of Energy Office of Basic Energy Sciences.

Genes borrowed from bacteria allowed plants to move to land