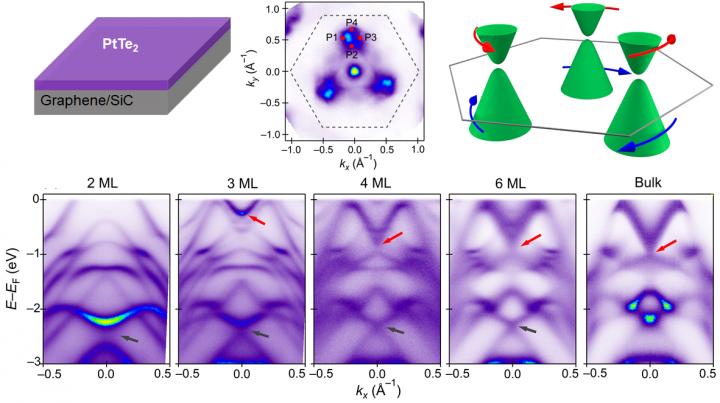 In bulk PtTe2 crystal, massless Dirac fermions are found to emerge at the topologically protected touching points of electron and hole pockets. The strongly tilted Dirac cone along the out-of-plane momentum direction breaks the Lorentz invariance and therefore the low energy excitations are Dirac fermions that do not have counterpart in high-energy physics. Their previous work shows that the isostructural material PtSe2 is also a type-II Dirac semimetal, and there is a 3D Dirac semimetal-semiconductor transition with decreasing thickness. In addition, monolayer PtSe2 shows interesting helical spin texture induced by local Rashba effect (R-2) despite the fact that the monolayer film itself is centrosymmetric. Such hidden spin texture induced by local Rashba effect has been expected to provide an important platform for realizing novel topological superconductivity with odd parity if superconductivity with s-wave pairing can be induced. However, considering that monolayer PtSe2 is a semiconductor with a large gap size of 1.2 eV, it is difficult to tune the Fermi energy in such a large range to make it a superconductor. It is therefore critical to find a similar centrosymmetric film with local Rashba effect yet with metallic property, which can provide a better opportunity for realizing topological superconductivity.

In this work, by using ARPES, Shuyun Zhou’s group directly detects the electronic structure of PtTe2 thin films with different thickness, and observed metallic band dispersion of PtTe2 thin films even down to 2 ML. A crossover from 2D metal (2ML, distinguished from the 2 ML semiconducting PtSe2 film) to 3D Dirac semimetal is also revealed. The electronic dispersion exhibits strong thickness dependent: with increasing film thickness, the V-shaped pockets at the Fermi level in 2 ML and 3 ML films move down in energy and eventually touch the hole-like pocket at higher binding energy, leading to the formation of a three-dimensional type-II Dirac fermions in 4-6 ML films, which show similar dispersion to bulk crystal and thus are effectively a topological semimetal. Further spin-ARPES measurements on PtTe2 bulk crystal reveal a helical spin texture induced by local Rashba effect. Since the Rashba effect is determined by the crystal symmetry and bulk and thin film PtTe2 share the same symmetry, similar spin texture by local Rashba effect is also expected in PtTe2 thin films.

This work was in collaboration with Wenhui Duan group and Xiaoyan Zhong group at Tsinghua University, and Taichi Okuda from Hiroshima University. The work is funded by the National Natural Science Foundation of China (11725418 and 11334006), Ministry of Science and Technology of China (2016YFA0301004, 2016YFA0301001, and 2015CB921001), Science Challenge Project (TZ2016004) and Beijing Advanced Innovation Center for Future Chip (ICFC). Spin-ARPES experiments at Hiroshima Synchrotron Radiation Center have been performed under the proposal number 14-A-15 and 16AG058.

Scienmag Oct 23, 2019
Credit: Albi Celaj Most diseases are complex--caused by faults in multiple genes--but studying how…