Applying new CRISPR-based technology to a broad agricultural need, researchers at the University of California San Diego have set their aims on a worldwide pest known to decimate valuable food crops. 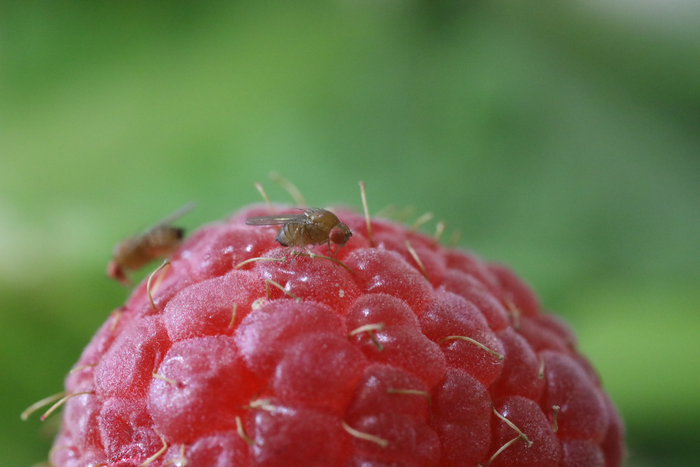 Applying new CRISPR-based technology to a broad agricultural need, researchers at the University of California San Diego have set their aims on a worldwide pest known to decimate valuable food crops.

Nikolay Kandul, Omar Akbari and their colleagues first demonstrated the precision-guided sterile insect technique, or pgSIT, in Drosophila melanogaster, the common fruit fly, in 2019. The technology, later adapted to mosquitoes, uses programmable CRISPR techniques to edit key genes that control sex determination and fertility. Under the new system, pgSIT-developed insect eggs are deployed into a targeted population and only sterile males hatch, resulting in a fertility dead end for that species.

Kandul, Akbari and their colleagues have now adapted the technology for use in Drosophila suzukii, an invasive fruit fly (also known as the spotted-wing drosophila) responsible for millions of dollars in crop damage. The advancement is described in the journal GEN Biotechnology.

“It’s a safe, evolutionary stable system,” said Akbari, a professor in the School of Biological Sciences’ Department of Cell and Developmental Biology. “Also, the system does not lead to uncontrolled spread nor does it persist in the environment—both important safety features that will help it gain approvals for use.”

The flies are known to proliferate by depositing their eggs inside growing fruit. They are notoriously difficult to control since their larvae consume ripening fruit pulp, limiting the effectiveness of insecticide sprays. Some flies have been known to become resistant to insecticides and many chemicals used in insecticides are now banned because of threats to human health.

The concepts behind pgSIT date back to the 1930s, when farmers found ways to release sterile males into their crops to reduce damage from pests. By mid-century, United States farmers began using radiation to sterilize pests such as the New World screwworm fly.

With CRISPR, UC San Diego scientists avoided the need for harmful radiation and instead use CRISPR editing to specifically target genes essential for female D. suzukii viability and male fertility. As envisioned, pgSIT eggs could be produced at a factory and released at sites invaded by pests such as D. suzukii. Eggs could be deployed directly into areas where the flies are causing damage and only sterile males would hatch after about two weeks. Since only two genes are knocked out, the males emerge fit enough to compete with their wild counterparts and quickly seek females to mate with, resulting in inviable offspring.

“This technology would replace the need for insecticides and only suppress the target species population,” said Akbari. “In the last four years, we’ve developed pgSIT for several different species. Going forward we’re hoping to use it as a platform technology that can be ported to a whole range of pests to safely solve real-world problems.”

Agragene Inc., a private biotechnology company co-founded by Akbari, has licensed the pgSIT base technology from UC Riverside (where Akbari initially led the technology’s development) and is implementing U.S. Department of Agriculture-administered field trials of pgSIT in D. suzukii. The company hopes that the trials will demonstrate the safety and effectiveness of pgSIT and lead to regulatory approval of the technology for broad agricultural use.