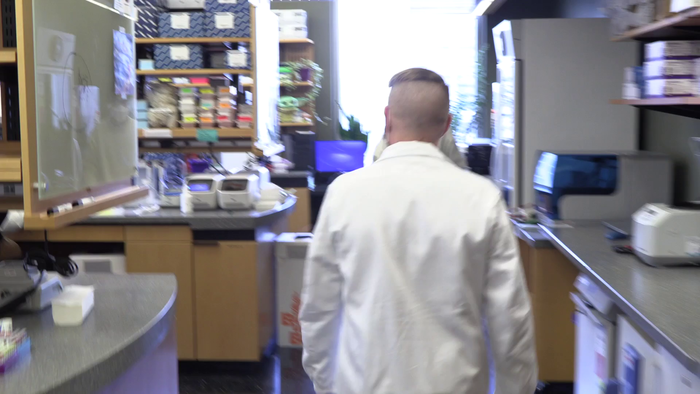 The HIV epidemic has been overlooked during the COVID-19 pandemic but represents a critical and ongoing threat to human health with an estimated 1.5 million new infections in the last year alone.

Drug developers and research teams have been searching for cures and new treatment modalities for HIV for over 40 years but are limited by their understanding of how the virus establishes infection in the human body. How does this small, unassuming virus with only 12 proteins — and a genome only a third of the size of SARS-CoV-2 — hijack the body’s cells to replicate and spread across systems?

A cross-disciplinary team at Northwestern sought to answer that very question.

In the team’s new study, published today (April 1) in the journal Nature Communications, scientists used a new CRISPR gene-editing approach to identify human genes that were important for HIV infection in the blood, finding 86 genes that may play a role in the way HIV replicates and causes disease, including over 40 that have never been looked at in the context of HIV infection.

The study proposes a new map for understanding how HIV integrates into our DNA and establishes a chronic infection.

“The existing drug treatments are one of our most important tools in fighting the HIV epidemic and have been amazingly effective at suppressing viral replication and spread,” said Northwestern’s Judd Hultquist, a co-corresponding author. “But these treatments aren’t curative, so individuals living with HIV have to follow a strict treatment regimen that requires continual access to good affordable health care — that’s simply not the world we live in.”

Hultquist said with more understanding of how the virus replicates, treatments could one day become cures.

Hultquist is associate director of the Center for Pathogen Genomics and Microbial Evolution at Northwestern University Feinberg School of Medicine and serves as an assistant professor of medicine in infectious diseases at Feinberg.

A method without compromise

Before now, studies have relied on the use of immortalized human cancer cells (like HeLa cells) as models to study how HIV replicates in the lab. While these cells are easy to manipulate in the lab, they are imperfect models of human blood cells. Additionally, most of these studies use technology to turn down the expression of certain genes, but not turn them off entirely as with CRISPR, meaning scientists can’t always clearly determine if a gene was involved in helping or suppressing viral replication.

“With the CRISPR system, there’s no intermediary – the gene is on or off,” Hultquist said. “This capability to turn genes on and off in cells isolated directly from human blood is a game changer — this new assay is the most faithful representation of what’s happening in the body during HIV infection that we could easily study in the lab.”

In the study, T cells — the major cell type targeted by HIV — were isolated from donated human blood, and hundreds of genes were knocked out using CRISPR-Cas9 gene editing. The “knock-out” cells were then infected with HIV and analyzed. Cells that lost a gene important for viral replication showed decreased infection, while cells that lost an antiviral factor showed an increase in infection.

From there, the team validated the identified factors by selectively knocking them out in new donors, where they found a nearly even break of newly discovered pathways and well-researched ones.

Moving toward a cure for HIV

Hultquist said their findings represented a “perfect split” of novel and known factors to know they were doing something right.

“This is a really great proof-of-concept that the steps and processes that we took to perform the study were robust and well thought out,” Hultquist said. “That nearly half of the genes we found were previously discovered increases confidence in our dataset. The exciting part is that over half — 46 — of these genes had never before been looked at in the context of HIV infection, so they represent new potential therapeutic avenues to look into.”

The team is excited about further developing this technology to enable genome-wide screening where they independently knock out or turn on every gene in the human genome to identify all potential HIV host factors. These data would represent a critical piece in the puzzle, which would bring them even closer to curative strategies.

The study was a collaboration between Hultquist at Northwestern and Alexander Marson and Nevan Krogan at the University of California, San Francisco.