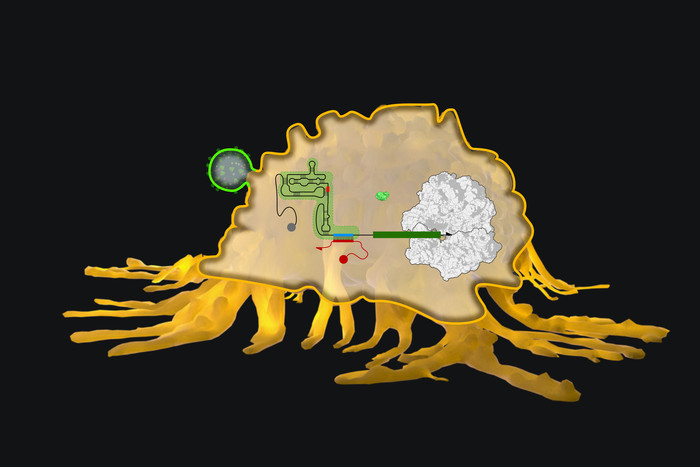 (Boston) — RNAs are best known as the molecules that translate information encoded in genes into proteins with their myriad of activities. However, because of their structural complexity and relative stability, RNA also has attracted great attention as a valuable biomaterial that can be used to create new types of therapies, synthetic biomarkers, and, of course, potent vaccines as we have learned from the COVID-19 pandemic.

Delivering a synthetic RNA molecule into a cell essentially instructs it to produce a desired protein, which can then carry out therapeutic, diagnostic, and other functions. A key challenge for researchers has been to only allow cells causing or affected by a specific disease to express the protein and not others. This ability could significantly streamline production of the protein in the body and avoid unwanted side effects.

Now, a team of synthetic biologists and cell engineers led by James J. Collins, Ph.D. at the Wyss Institute for Biologically Inspired Engineering and Massachusetts Institute of Technology (MIT), has developed eToeholds – small versatile devices built into RNA that enable expression of a linked protein-encoding sequence only when a cell-specific or viral RNA is present. eToehold devices open up multiple opportunities for more targeted types of RNA therapy, in vitro cell and tissue engineering approaches, and the sensing of diverse biological threats in humans and other higher organisms. The findings are reported in Nature Biotechnology.

In 2014, Collins’ team, together with that of Wyss Core Faculty member Peng Yin, Ph.D., successfully developed toehold switches for bacteria that are expressed in an off-state and respond to specific trigger RNAs by turning on the synthesis of a desired protein by the bacterial protein synthesizing machinery. However, the bacterial toehold design cannot be used in more complex cells, including human cells, with their more complicated architecture and protein synthesizing apparatus.

“In this study, we took IRES [internal ribosome entry sites] elements, a type of control element common in certain viruses, which harness the eukaryotic protein translating machinery, and engineered them from the ground up into versatile devices that can be programed to sense cell or pathogen-specific trigger RNAs in human, yeast, and plant cells,” said Collins. “eToeholds could enable more specific and safer RNA therapeutic and diagnostic approaches not only in humans but also plants and other higher organisms, and be used as tools in basic research and synthetic biology.”

The control elements known as “internal ribosome entry sites,” in short IRESs, are sequences found in viral RNA that allow the host cell’s protein-synthesizing ribosomes access to a segment of the viral genome next to a sequence encoding a viral protein. Once latched on to the RNA, ribosomes start scanning the protein encoding sequence, while simultaneously synthesizing the protein by sequentially adding corresponding amino acids to its growing end.

“We forward-engineered IRES sequences by introducing complementary sequences that bind to each other to form inhibitory base-paired structures, which prevent the ribosome from binding the IRES,” said co-first author Evan Zhao, Ph.D., who is a Postdoctoral Fellow on Collins’ team. “The hairpin loop-encoding sequence element in eToeholds is designed such that it overlaps with specific sensor sequences that are complementary to known trigger RNAs. When the trigger RNA is present and binds to its complement in eToeholds, the hairpin loop breaks open and the ribosome can switch on to do its job and produce the protein.”

Zhao teamed up with co-first author and Wyss Technology Development Fellow Angelo Mao, Ph.D., in the eToehold project, which enabled them to combine their respective areas of expertise in synthetic biology and cell engineering to break new ground in the manipulation of IRES sequences.

In a process of quick iteration, they were able to design and optimize eToeholds that were functional in human and yeast cells, as well as cell-free protein-synthesizing assays. They achieved up to 16-fold induction of fluorescent reporter genes linked to eToeholds exclusively in the presence of their appropriate trigger RNAs, compared to control RNAs.

“We engineered eToeholds that specifically detected Zika virus infection and the presence of SARS-CoV-2 viral RNA in human cells, and other eToeholds triggered by cell-specific RNAs like, for example, an RNA that is only expressed in skin melanocytes,” said Mao. “Importantly, eToeholds and the sequences encoding desired proteins linked to them can be encoded in more stable DNA molecules, which when introduced into cells are converted into RNA molecules that are tailored to the type of protein expression we intended. This expands the possibilities of eToehold delivery to target cells.”

The researchers believe that their eToehold platform could help target RNA therapies and some gene therapies to specific cell types, which is important as many such therapies are hampered by excessive off-target toxicities. In addition, it could facilitate ex vivo differentiation approaches that guide stem cells along developmental pathways to generate specific cell types for cell therapies and other applications. The conversion of stem cells and intermediate cells along many differentiating cell lineages often is not very effective, and eToeholds could help with enriching desired cell types.

“This study highlights how Jim Collins and his team on the Wyss Living Cellular Device platform are developing innovative tools that can advance the development of more specific, safe, and effective RNA and cellular therapies, and so positively impact on the lives of many patients,” said Wyss Founding Director Donald Ingber, M.D., Ph.D., who is also the Judah Folkman Professor of Vascular Biology at Harvard Medical School and Boston Children’s Hospital, and Professor of Bioengineering at the Harvard John A. Paulson School of Engineering and Applied Sciences.