Cracking the enigma of how plant sperm is compacted

Sperm cells have compact bundles of DNA, yet exactly how and why sperm cell nuclei are condensed in flowering plants has been a mystery, until now. 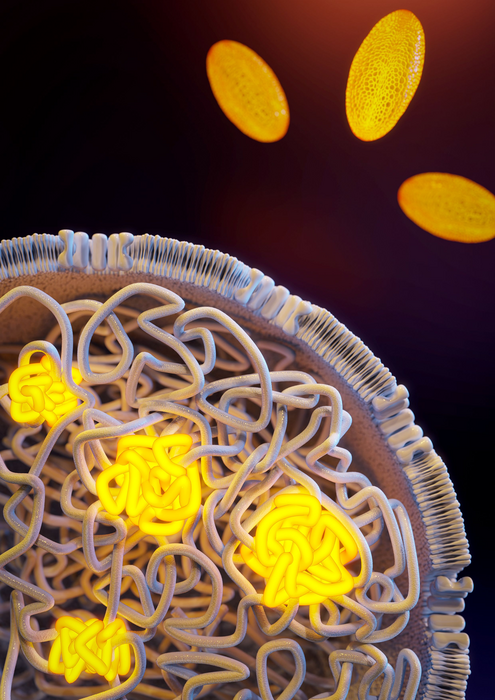 Sperm cells have compact bundles of DNA, yet exactly how and why sperm cell nuclei are condensed in flowering plants has been a mystery, until now.

A research team from the John Innes Centre have discovered a mechanism of flowering plant sperm compaction and gathered clues as to why it is required.

How do flowering plants compact their DNA in sperm cells?

Researchers from the Professor Xiaoqi Feng group have shown how in flowering plants, sperm chromatin, a complex of DNA and proteins, is compacted by a special histone protein that spontaneously self-aggregates as oil droplets do in water, a phenomenon known as phase separation.

Flowering plants use a different mechanism to animals and non-seed plants (such as ferns and mosses). In these other organisms, sperm chromatin undergoes near-complete replacement of histones with protamines which highly compacts the DNA.

The mechanism of compaction in flowering plants was unknown, as they do not have protamines but instead maintain histone-based chromatin.

H2B.8 has a long intrinsically disordered region (IDR), a feature that frequently allows proteins to undergo phase separation. The research found nearly all flowering plant species have H2B.8 homologs (copies), all of which contain an IDR, suggesting important functions.

Using imaging, epigenomic sequencing and 3D genome mapping, the researchers show that H2B.8 condenses sperm DNA by inducing the phase separation and aggregation of euchromatin, the part of chromatin that is comparatively decondensed and transcriptionally active.

Because euchromatin takes up most of the nuclear volume its aggregation is a highly effective mechanism for nuclear condensation.

They also show that owing to the specific localization of H2B.8 within inactive euchromatin, its condensation function does not adversely affect transcription and the activity of genes.

Why do flowering plants condense their DNA in this way?

Many organisms have highly condensed sperm. For example, mammals produce motile sperm which swims, and they benefit from compact DNA bundles in their sperm nuclei to achieve a small and hydrodynamic sperm head that aids swimming velocity.

Flowering plants produce pollen which does not swim, posing the question ‘why does DNA compaction occur in the sperm of flowering plants?’

Consistent with this idea, gymnosperms, a group of non-flowering seed plants (for example conifers, cycads) that have exposed egg apparatus have uncondensed sperm nuclei and lack H2B.8.

Dr Toby Buttress first author of the study said: “We propose that H2B.8 is a flowering plant evolutionary innovation that achieves a moderate level of nuclear condensation compared to protamines, which sacrifice transcription for super compaction. H2B.8-mediated condensation is sufficient for immotile sperm and compatible with gene activity.”

The team also speculate that such nuclear condensation mechanisms are likely to operate outside of flowering plants, in transcriptionally active cells that favour smaller nuclei.

Dr Buttress continues: “We have discovered the first example of a specific core histone variant being able to affect the phase separation properties of chromatin.

“We demonstrate an exciting new mechanism of genome compaction that does not compromise gene activity.”