COVID-19 virus uses heparan sulfate to get inside cells 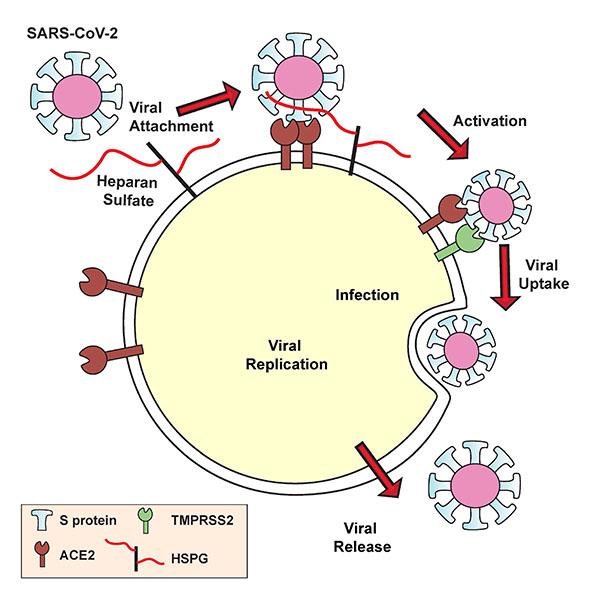 A molecule known as ACE2 sits like a doorknob on the outer surfaces of the cells that line the lungs. Since January 2020, researchers have known that SARS-CoV-2, the novel coronavirus that causes COVID-19, primarily uses ACE2 to enter these cells and establish respiratory infections. Finding a way to lock out that interaction between virus and doorknob, as a means to treat the infection, has become the goal of many research studies.

University of California San Diego School of Medicine researchers have discovered that SARS-CoV-2 can’t grab onto ACE2 without a carbohydrate called heparan sulfate, which is also found on lung cell surfaces and acts as a co-receptor for viral entry.

“ACE2 is only part of the story,” said Jeffrey Esko, PhD, Distinguished Professor of Cellular and Molecular Medicine at UC San Diego School of Medicine and co-director of the Glycobiology Research and Training Center. “It isn’t the whole picture.”

The team demonstrated two approaches that can reduce the ability of SARS-CoV-2 to infect human cells cultured in the lab by approximately 80 to 90 percent: 1) removing heparan sulfate with enzymes or 2) using heparin as bait to lure and bind the coronavirus away from human cells. Heparin, a form of heparan sulfate, is already a widely used medication to prevent and treat blood clots, suggesting that a Food and Drug Administration-approved drug might be repurposed to reduce virus infection.

Esko’s team has long studied heparan sulfate and the role it plays in health and disease. He led this study with visiting scholar Thomas Mandel Clausen, PhD, and postdoctoral researcher Daniel Sandoval, PhD. While Esko’s lab doesn’t necessarily focus on viruses, Clausen had previously studied how the malaria parasite interacts with a related carbohydrate on human cells and Sandoval had been interested in viruses since he was an undergraduate student — he still keeps up with the latest virology research for fun.

Late one Friday afternoon in March 2020, Clausen was tired and, he admits, putting off his experiments. Instead, he perused the latest research coming out about SARS-CoV-2. That’s when he came across a preliminary study that suggested an interaction between the coronavirus’s spike protein — the “hand” the virus uses to grab the ACE2 doorknob — and another carbohydrate related to heparan sulfate.

“I ran down to Daniel to tell him to look at the study — and of course, he was already thinking the same thing,” said Clausen, who is also an associate professor at University of Copenhagen in Denmark.

Within a week, the team was testing their theories in the lab. They discovered that the SARS-CoV-2 spike protein binds to heparin. The team also drilled down to uncover the exact part of the SARS-CoV-2 spike protein that interacts with heparin — the receptor binding domain. When heparin is bound, the receptor binding domain opens up and increases binding to ACE2. The virus, they found, must bind both heparan sulfate on the cell surface and ACE2 in order to get inside human lung cells grown in a laboratory dish.

With this viral entry mechanism established, the researchers next set about trying to disrupt it. They found that enzymes that remove heparan sulfate from cell surfaces prevent SARS-CoV-2 from gaining entry into cells. Likewise, treatment with heparin also blocked infection. The heparin treatment worked as an anti-viral at doses currently given to patients, even when the researchers removed the anticoagulant region of the protein — the part responsible for preventing blood clots.

The findings are still far from translating into a COVID-19 treatment for people, said Esko. Researchers will need to test heparin and heparan sulfate inhibitors in animal models of SARS-CoV-2 infection. In a related study, UC San Diego scientists are also exploring the role human microbiomes, including the bacteria that live in and on the body, play in altering heparan sulfate and thus influencing a person’s susceptibility to COVID-19.

“This is one of the most exciting periods of my career — all of the things we’ve learned about heparan sulfate and the resources we’ve developed over the years have come together with a variety of experts across multiple institutions who were quick to collaborate and share ideas,” Esko said. “If there’s a silver lining to this pandemic, I hope it’s that the scientific community will continue to work rapidly together like this to address other problems.”