When we fall ill, we often lose our appetite. This also has an effect on our metabolism: since it is no longer as well supplied with carbohydrates, it switches to burning fat. This creates energy-rich molecules called ketone bodies. And these may help our body to cope better with viruses. 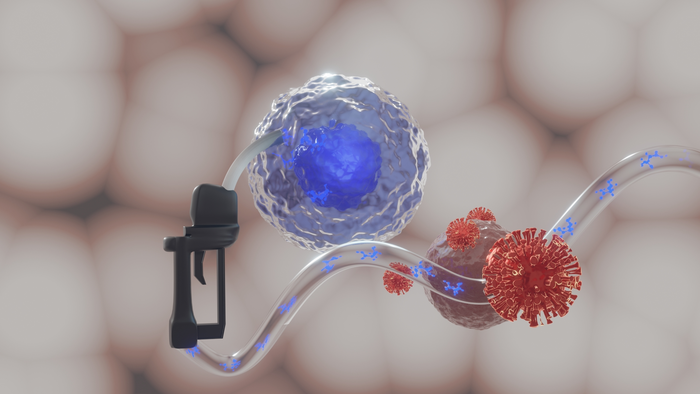 When we fall ill, we often lose our appetite. This also has an effect on our metabolism: since it is no longer as well supplied with carbohydrates, it switches to burning fat. This creates energy-rich molecules called ketone bodies. And these may help our body to cope better with viruses.

At least that is what the results of the current study suggest. “We found that patients with influenza infections produce ketone bodies in considerable quantities,” explains Prof. Dr. Christoph Wilhelm from the Institute of Clinical Chemistry and Clinical Pharmacology at the University Hospital Bonn, who is also a member of the Immunosensation2 Cluster of Excellence at the University of Bonn. “In contrast, we saw hardly any increase in Covid-19 patients, at least in those with a moderate or severe course.”

In addition, it was striking that those infected with the coronavirus had lower levels of inflammatory messengers in their blood. This was particularly true for interferon-gamma. This is a cytokine secreted by a specific group of immune cells, the T-helper cells. These cells use it to summon the help of phagocytes and other defense troops of the immune system to fight viruses. For efficient production of IFN-gamma, however, the helper T cells apparently require an adequate supply of ketone bodies. If this is lacking, they produce less interferon-gamma. In addition, the helper T cells then die earlier.

The researchers also saw similar effects in another important group of immune cells, the killer T cells. “They too need ketone bodies to function well and effectively eliminate the virus,” says Dr. Christian Bode, lecturer at the Department of Anesthesiology and Surgical Intensive Care Medicine at the University Hospital Bonn. Apparently, the ketone bodies promote the function of mitochondria, metabolic power houses fueling the immune cells. This not only ensures improved energy production, but also provides molecules that are needed for interferon production.

“Without an adequate supply of ketone bodies, on the other hand, the killer T cells and helper T cells show signs of exhaustion,” Bode explains. “In this depleted state, they can no longer perform their function adequately.” However, the researchers were able to revive the immune cells by placing diseased mice on a ketogenic diet (a diet low in carbohydrates and protein) or by administering ketone bodies directly. The animals then succeeded better in eliminating the virus and also developed significantly less lung damage.

The results therefore also raise hope for new treatment options. “It may be possible to increase the power of the body’s own defenses through a targeted change in diet,” says Wilhelm. “Whether this really works must now be shown by further studies.” The researchers expressly advise against self-experimentation with dietary supplements or diets – these could possibly do more harm than good.

The new findings could also be relevant for other infections. In the medium term, they may even contribute to new strategies to help the body fight tumors.