COVID-19 advice may have reduced exposure to heart attack triggers 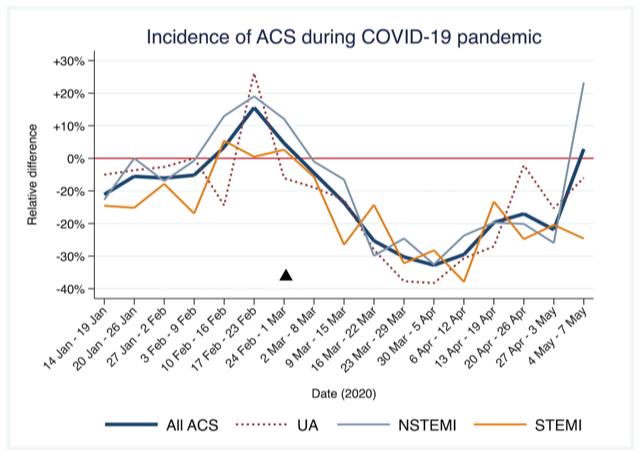 A new study suggests that COVID-19 guidance in Sweden may have reduced people’s risks of having a heart attack.

By using anonymous location data from mobile phones, researchers developed an aggregate picture of the activities of the Swedish population and mapped it against attendances at the country’s 29 emergency cardiac angiography units.

Cardiac angiography is used to treat blockages to the heart’s blood vessels.

On those days when the location data revealed people were staying close to home, the proportion of patients going to hospital for emergency heart treatment dropped from an average of 63 patients a day in pre-COVID years to an average of 55 patients a day during the first wave of the pandemic – from 1 March to 5 May 2020. At its lowest point, in the early part of April, the drop in patients was 38 percent.

A downloadable graph shows the relative drop in patients attending the cardiac angiography units. The decline was seen from early March. The Swedish public health authorities advised people aged 70-plus to stay at home from 16 March. (Please see details in Notes to editors).

In comparison, when the location data showed people were active at work or were going shopping or being physically active, the proportionate number of attendances at the heart units rose.

Chris Gale, Professor of Cardiovascular Medicine at the University of Leeds, was one of the scientists involved in the study. He said: “This was a statistical analysis so cause-and-effect cannot be directly determined, but it has identified a number of interesting associations.

“Although Sweden was not locked down, people aged 70 or more were urged to stay at home and that could have reduced exposure to some of the events that are known to trigger a heart attack such as stress, intense physical activity, air pollution and exposure to some viruses.”

The study – the Effects of movement trends on acute coronary syndrome during the COVID-19 pandemic – published in the Journal of Internal Medicine, is one of the first scientific investigations to use aggregated mobility data from map services from mobile devices to help explain how COVID-19 and the health messages around the virus may have affected people’s health.

The findings in detail

A baseline measure was set for the location activity data based on daily averages from pre-COVID times. Variation from that baseline was measured as a percentage increase or decrease. The following associations were observed with the data from the angiography clinics:

The researchers say the decline in people attending hospital with a heart attack was seen in other countries including the UK, where it is believed people might not have sought emergency medical treatment out of fear of contracting COVID-19 or because they did not want to overwhelm hard-pressed NHS services.

But the researchers say there is no evidence in Sweden that there were bed shortages, higher mortality from heart disease or changes in quality of care in hospitals – factors which might have suggested people were becoming ill but had decided not to seek emergency help.

They said in the paper: “Self-isolation, working from home, and less rigorous recreational activities may have decreased stress and exertion-induced acute cardiac syndrome in individuals at risk and can possibly explain the decline in incidence of myocardial infarction (heart attack) as the association between psychological stress and physical exertion and incidence of myocardial infarction/ACS is well established.”

The researchers say that messaging about hand hygiene and social distancing has reduced the spread of other respiratory conditions such as flu which could also trigger heart problems.

Dr Moman Mohammad, from Lund University, Sweden, who led the study, said: “The results give a first insight into how data from mobile devices may provide a rapid measure of how the behaviour of a population might change and how that can influence the spread of disease – and possibly, enable us to predict the level of future hospitalisations.

“We know that a stroke can be triggered by the same events that trigger a heart attack. During the first wave of the pandemic, there is evidence that the number of people experiencing a stroke also declined.”

For further information, please contact David Lewis in the press office at the University of Leeds: [email protected] or 07710 013287.

The paper can be downloaded from the following link: https://onlinelibrary.wiley.com/doi/abs/10.1111/joim.13206

The graph can be downloaded by following this link. Please credit: Journal of Internal Medicine

The graph shows the relative difference in incidence in people hospitalised with acute coronary syndrome and its sub-types: unstable angina, NSTEMI heart attack (involving a partial blockage of the blood supply to the heart) and a STEMI heart attack (where there is a total blockage of the coronary artery). The graph can be downloaded by following this link. Please credit: Journal of Internal Medicine.

What were the data sources?

Apple’s data was categorised around driving, transiting and walking.

A baseline measure was set for the location activity from data recorded earlier in the year, before the first wave of the pandemic in Europe. In the days that followed, the variation from that baseline was measured as a percentage increase or decrease.

The Swedish health system keeps a database record of the attendances at its emergency angiography clinics, known as the SCAAR Registry. The percentage change in the number of patients was measured against the attendances at the clinics on the same day averaged out over the five years from 2015 to 2019.

Follow University of Leeds or tag us in to coverage: