Could robots make a documentary about a 5K race?

Researchers are training robots to observe and make decisions 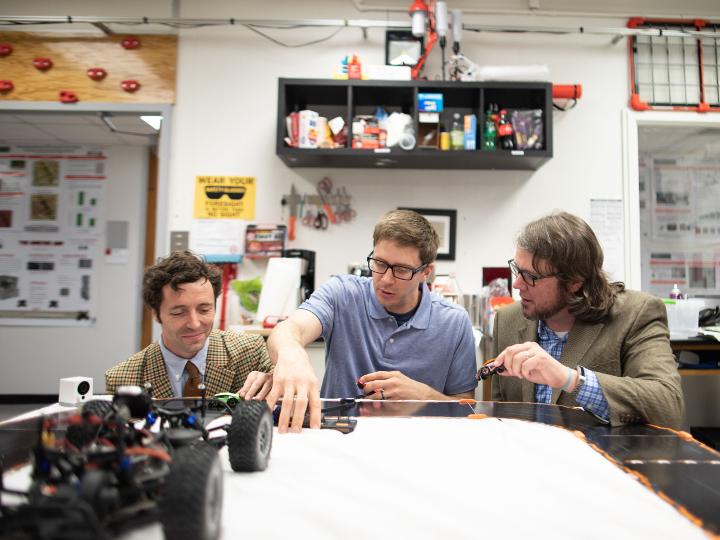 A 5K race can offer both victory and heartbreak, but capturing those moments on video requires both planning ahead and making on-the-spot decisions about where the camera operators should be.

A project led by Aaron T. Becker, assistant professor of electrical and computer engineering at the University of Houston, will study how to direct a team of mobile robots to document a race, predicting likely events and changing plans based on real-time action.

Getting robots to capture video footage is easy. The difficulty lies in directing them to act on their own to capture the most pertinent moments of the race, required for weaving an engaging and complete narrative from the footage.

The camera-equipped robots will be programed to gather information as they go, without knowing in advance what will happen, including who will win the race. “Unlike the highlight reel in MarioKart™, real robots won’t know ahead of time where the interesting parts will be,” Becker explained, “but they will know a lot of probability theory and will be able to calculate the odds of good video footage as a function of race status and robot position.”

He will collaborate with Dylan Shell, associate professor of computer science and engineering at Texas A&M University, and Jason O’Kane, professor of engineering and computing at the University of South Carolina, on the project, which is funded by a $600,000 grant from the National Science Foundation.

The project will play out over three years, with the robots tasked with filming a 5K race on the UH campus each year. Becker, whose lab works on a number of projects involving swarm robotics, said the quality of the resulting documentary should improve each year.

A date for the first race has not been set, but the team is searching for partners.

The project will start with five robots, including a robotic car capable of moving up to 10 mph, currently being built by a senior design team made up of electrical engineering students Rhema Ike, Farah Luba, Henry Nguyen and Ramsey Daou.

The first task, Ike said, is training the car to autonomously track a runner for the entire 5K race. She will graduate in May and continue working on the project as a graduate student.

“I love making autonomous robots,” she said. “The overall goal is to make a system where a robot can actually predict what will happen, and that’s pretty cool.”

In an upcoming paper, the researchers propose several potential applications for what they expect to learn, from explaining the outcome of an athletic competition to identifying the cause of an explosion. Directing robots to produce documentary-style coverage of a race encapsulates many of the elements those other projects would require, they said.