Could catnip become the new DEET? 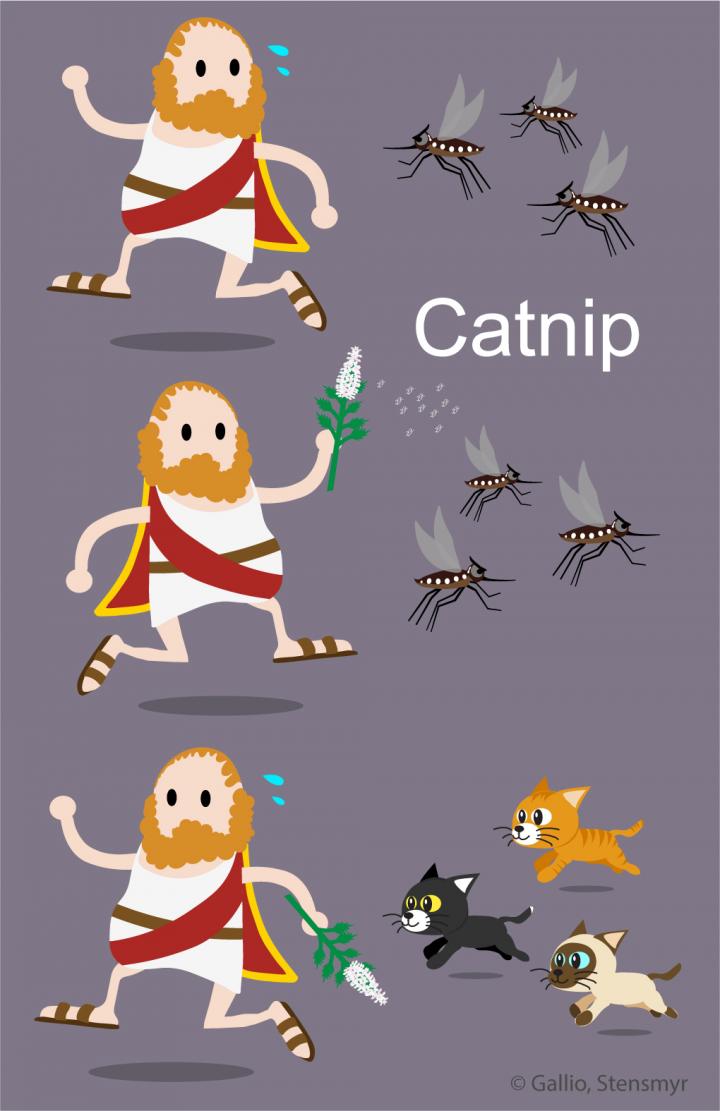 New collaborative research from Northwestern University and Lund University may have people heading to their backyard instead of the store at the outset of this year’s mosquito season.

Often used as an additive for cat toys and treats due to its euphoric and hallucinogenic effects on cats, catnip has also long been known for its powerful repellent action on insects, mosquitoes in particular. Recent research shows catnip compounds to be at least as effective as synthetic insect repellents such as DEET.

But until now, the mechanism that triggered insects’ aversion to this common member of the mint family was unknown. In a paper to be published March 4 in the journal Current Biology, a team of researchers from Northwestern and Lund universities report finding the underlying receptors that contribute to the mosquitoes’ aversive reaction.

“Catnip and its active ingredient, Nepetalactone, have been used for millennia to ward off insect pests, at least since the time of Pliny the Elder,” said Marcus C. Stensmyr, associate professor at Lund University and co-corresponding author. “But why Catnip is so potent on such a broad range of insect species has remained unknown.”

Traditional approaches to mosquito control involved insecticides, but those eliminate other insect species as collateral damage. Modern formulations of insect repellents such as DEET target mosquito odor and taste receptors, rendering the insect incapable of recognizing the chemical cues that signal a human prey.

“We discovered that Catnip and its active ingredient Nepetalactone activate the irritant receptor TRPA1, an ancient pain receptor found in animals as diverse as flatworms, fruit flies and humans,” said Marco Gallio, an associate professor of neurobiology in the Weinberg College of Arts and Sciences. “We now think Catnip is so aversive to so many insect species because it activates this widespread irritant receptor.”

In previous work, the Gallio Lab and others demonstrated that humans, insects and many other animal species possess a version of the transient receptor potential ankyrin 1 (TRPA1) ion channel, a protein best known as the “wasabi receptor” that senses environmental irritants like pain and itch.

“What is particularly interesting is that, unlike wasabi or garlic compounds that also activate these receptors in humans, catnip appears to selectively activate the insect receptor,” Gallio said. “This explains why humans are indifferent to it, and provides a serious advantage for its use as a repellent.”

Why cats are so attracted to catnip is an entirely different story and one that is not entirely understood. Research indicates this may be due to an unusual interaction between one of catnip’s active ingredients and a molecular component present in the reward system of the cat brain.

“Mosquitos, in particular those that act as vector for disease, are becoming a bigger problem as climate change creates attractive conditions for them farther north and south of the equator,” Stensmyr said. “Plant-derived compounds represent a new emerging approach to developing insect repellents, as plants have long known how to protect themselves from insect pests.”

Gallio added that plant-derived repellants are often available at a much lower cost and are easier to obtain. Catnip’s accessibility could have major implications in developing countries where mosquito-borne diseases are a huge problem.

The Gallio lab at Northwestern studies the sensory systems of the common Lab fruit fly Drosophila, including the mechanisms that control the responses to external temperature and pain. Lund’s Stensmyr lab mainly focuses on mosquitoes and other insect vectors of human disease.

The researchers studied various insect species to better understand how catnip and its active ingredient are working to repel a broad range of insects, while having no irritant effect on humans.

To confirm their results, the team ran a range of tests, including offering mosquitoes a blood meal in a dish covered with a nylon sock doused in catnip, experiments involving a wind tunnel, as well as experiments in which volunteers place their hand in a cage with live mosquitos, with or without the protection of a catnip oil rub.

Gallio believes that the mechanism they discovered also provides proof of concept for the development of next-generation repellents that exploit the same logic – selectively targeting the mosquito irritant receptor.

“This is an entry point to study how this molecule works on the receptor,” he said. “Once we understand its chemistry and how it interacts with the receptor, we could design even more powerful and selectively targeted molecules.”

The team’s next project? Finding out how to get rid of the cats that keep chasing them down.

Work in the Gallio lab at Northwestern is supported by NIH grant R01NS086859, R21EY031849, a Pew Scholars Program in the Biomedical Sciences and a McKnight Technological Innovations in Neuroscience Awards to Marco Gallio.

The paper is titled “The irritant receptor TRPA1 mediates the mosquito repellent effect of catnip.”

In addition to Gallio and Stensmyr, other authors of the paper are Nadia Melo (first author) and Ayse Yilmaz-Heusinger of Lund; Matthew Capek, Oscar Arenas, Peter Laminette and Alessia Para of Northwestern; and Ali Afifi and Christopher Potter of Johns Hopkins University School of Medicine.