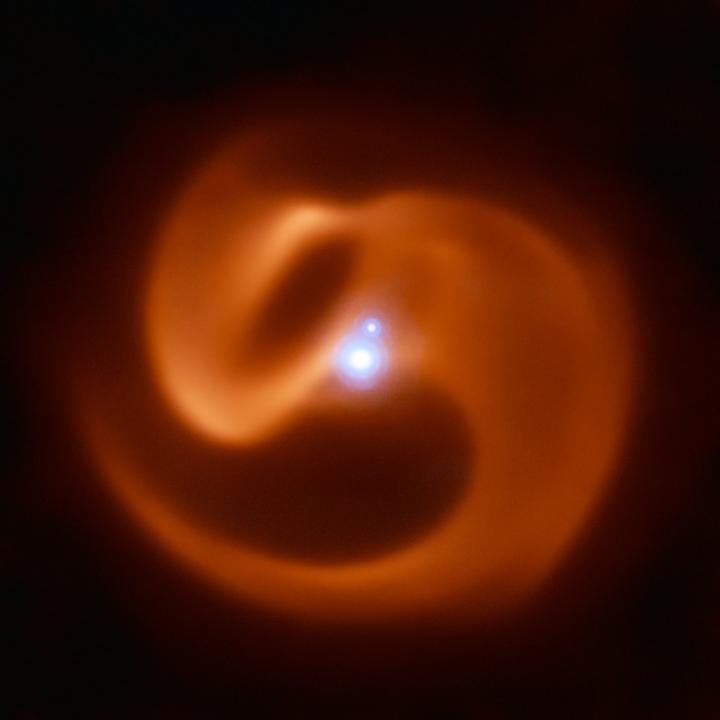 This serpentine swirl, captured by the VISIR instrument on ESO’s Very Large Telescope (VLT, has an explosive future ahead of it; it is a Wolf-Rayet star system, and a likely source of one of the most energetic phenomena in the Universe — a long-duration gamma-ray burst (GRB) .

“This is the first such system to be discovered in our own galaxy,” explains Joseph Callingham of the Netherlands Institute for Radio Astronomy (ASTRON), lead author of the study reporting this system. “We never expected to find such a system in our own backyard” [1].

The system, which comprises a nest of massive stars surrounded by a “pinwheel” of dust, is officially known only by unwieldy catalogue references like 2XMM J160050.7-514245. However, the astronomers chose to give this fascinating object a catchier moniker — “Apep”.

Apep got its nickname for its sinuous shape, reminiscent of a snake coiled around the central stars. Its namesake was an ancient Egyptian deity , a gargantuan serpent embodying chaos — fitting for such a violent system. It was believed that Ra, the Sun god, would battle with Apep every night; prayer and worship ensured Ra’s victory and the return of the Sun.

GRBs are among the most powerful explosions in the Universe. Lasting between a few thousandths of a second and a few hours, they can release as much energy as the Sun will output over its entire lifetime. Long-duration GRBs — those which last for longer than 2 seconds — are believed to be caused by the supernova explosions of rapidly-rotating Wolf-Rayet stars.

Some of the most massive stars evolve into Wolf-Rayet stars towards the end of their lives. This stage is short-lived, and Wolf-Rayets survive in this state for only a few hundred thousand years — the blink of an eye in cosmological terms. In that time, they throw out huge amounts of material in the form of a powerful stellar wind, hurling matter outwards at millions of kilometres per hour; Apep’s stellar winds were measured to travel at an astonishing 12 million km/h.

These stellar winds have created the elaborate plumes surrounding the triple star system — which consists of a binary star system and a companion single star bound together by gravity. Though only two star-like objects are visible in the image, the lower source is in fact an unresolved binary Wolf-Rayet star. This binary is responsible for sculpting the serpentine swirls surrounding Apep, which are formed in the wake of the colliding stellar winds from the two Wolf-Rayet stars.

Compared to the extraordinary speed of Apep’s winds, the dust pinwheel itself swirls outwards at a leisurely pace, “crawling” along at less than 2 million km/h. The wild discrepancy between the speed of Apep’s rapid stellar winds and that of the unhurried dust pinwheel is thought to result from one of the stars in the binary launching both a fast and a slow wind — in different directions.

This would imply that the star is undergoing near-critical rotation — that is, rotating so fast that it is nearly ripping itself apart. A Wolf-Rayet star with such rapid rotation is believed to produce a long-duration GRB when its core collapses at the end of its life.

[1] Callingham, now at the Netherlands Institute for Radio Astronomy (ASTRON), did part of this research while at the University of Sydney working with research team leader Peter Tuthill. In addition to observations from ESO telescopes, the team also used the Anglo-Australian Telescope at Siding Spring Observatory, Australia.

This research was presented in a paper entitled “Anisotropic winds in Wolf-Rayet binary identify potential gamma-ray burst progenitor” which appeared in Nature Astronomy on 19 November 2018.

ESO is the foremost intergovernmental astronomy organisation in Europe and the world’s most productive ground-based astronomical observatory by far. It has 16 Member States: Austria, Belgium, the Czech Republic, Denmark, France, Finland, Germany, Ireland, Italy, the Netherlands, Poland, Portugal, Spain, Sweden, Switzerland and the United Kingdom, along with the host state of Chile and with Australia as a Strategic Partner. ESO carries out an ambitious programme focused on the design, construction and operation of powerful ground-based observing facilities enabling astronomers to make important scientific discoveries. ESO also plays a leading role in promoting and organising cooperation in astronomical research. ESO operates three unique world-class observing sites in Chile: La Silla, Paranal and Chajnantor. At Paranal, ESO operates the Very Large Telescope and its world-leading Very Large Telescope Interferometer as well as two survey telescopes, VISTA working in the infrared and the visible-light VLT Survey Telescope. ESO is also a major partner in two facilities on Chajnantor, APEX and ALMA, the largest astronomical project in existence. And on Cerro Armazones, close to Paranal, ESO is building the 39-metre Extremely Large Telescope, the ELT, which will become “the world’s biggest eye on the sky”.

Cancer therapy may be aided by induced macropinocytosis, a rare form of cell death

Scienmag Dec 18, 2019
In preclinical experiments, a metabolic inhibitor killed a variety of human cancer cells of the skin, breast, lung,…

UTSA grows access to world-class observational labs for next gen…