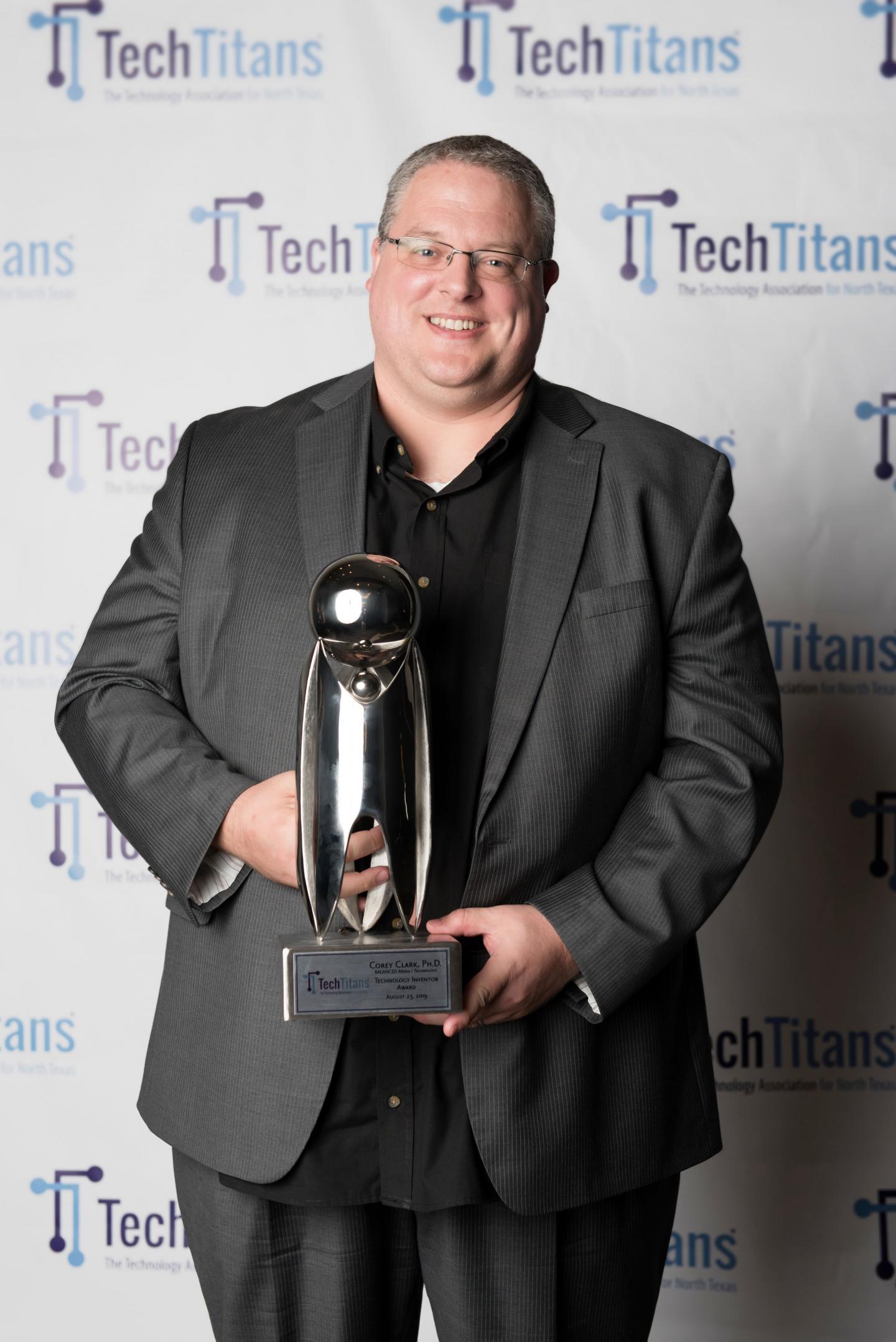 The award recognizes the pioneering accomplishments a person, team or group has made to create breakthrough ideas or products that have advanced the disciplines of arts, education, energy, engineering, environment, medicine and/or science.

Corey Clark, PhD, was selected as the recipient of the Technology Inventor Award because of the work he’s done to infuse human intelligence into machine learning. BALANCED Media | Technology’s HEWMEN platform combines the processing power of gaming computers with the intuition of gamers themselves to analyze medical imagery and processed data to help make cancer treatments more effective.

That technology was recently on display when former Dallas Cowboys’ champion Michael Irvin, Madden champion Drini (Complexity Gaming) and several others played a game for charity that Clark helped create using the HEWMEN platform. The game, called Omega Cluster, had each player act as a spaceship pilot who must warp from location to location gathering energy crystals before enemies’ lock onto their position and destroy their ship. But the process of collecting and sorting crystals was actually organizing by proxy a set of chemotherapeutic co-medications compounds that have been tested in the SMU Center for Drug Discovery, Design and Delivery’s laboratory. The game let players explore these compounds and identify what has allowed some to be successful in the lab testing while others have not.

In another project, Clark worked with SMU educators and designers and Literacy Instruction for Texas (LIFT) to create an Indiana Jones-like game to help adults who weren’t able to read. That project won $1.5 million as a grand prize winner in the Barbara Bush Foundation Adult Literacy XPRIZE competition, as well as an additional $1 million achievement award for most effective app to help adult English language learners learn to read in the competition.

Clark is the deputy director of research at SMU Guildhall and an assistant professor of computer science at SMU’s Lyle School of Engineering.

He was given the award on Aug. 23 at the 2019 Tech Titans Gala in Plano, Texas. Tech Titans is the largest technology trade organization in Texas and each year, it recognizes outstanding technology companies and individuals in the North Texas area who have made significant contributions to their industries.

To learn more about the work Clark has been involved in, visit his Human and Machine Intelligence (HuMIn) Game Lab website at https://humingamelab.com/.

SMU is the nationally ranked global research university in the dynamic city of Dallas. SMU’s alumni, faculty and nearly 12,000 students in seven degree-granting schools demonstrate an entrepreneurial spirit as they lead change in their professions, communities and the world.