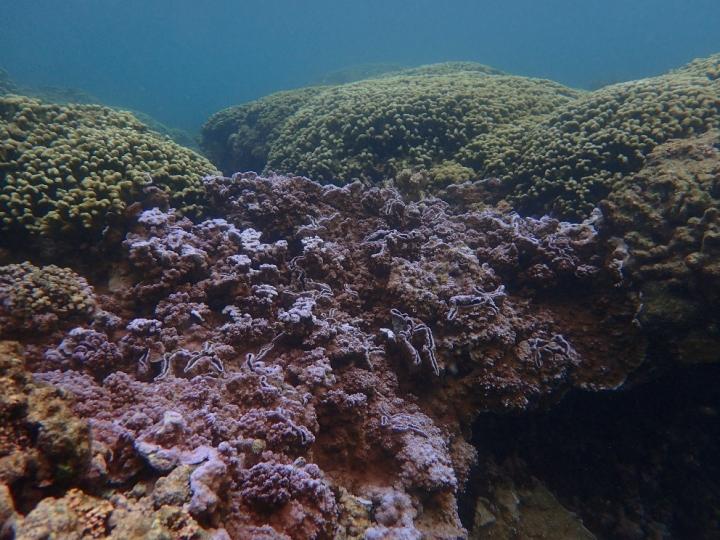 Smithsonian Conservation Biology Institute scientists are one step closer to understanding why some corals can weather climate change better than others, and the secret could be in a specific protein that produces a natural sunscreen. As their name implies, Hawaiian blue rice corals sport a deep blue pigment, which is created by chromoprotein and filters out harmful ultraviolet (UV) radiation from the sun. Although UV damage may produce long-term impacts to reproduction in many coral species–including brown rice coral–it may not have the same effect on blue rice coral. The findings of this study were published June 9 in the paper “Reproductive plasticity of Hawaiian Montipora corals following thermal stress” in Scientific Reports.

“Having witnessed firsthand the devastating effects bleaching had on brown rice coral in 2014 and 2015, it is encouraging to see blue rice coral either recovered quickly after bleaching or was not affected by elevated ocean temperatures at all,” said Mike Henley, Smithsonian Conservation Biology Institute scientist and the paper’s lead author. “By studying blue rice corals’ reproductive successes, we can better understand how other corals weather climate change and ocean warming.”

A coral’s color is derived from a microscopic protozoa called zooxanthellae. This algae lives inside the coral tissue and serves as the main food source for shallow, reef-building corals, including brown rice coral and blue rice coral. They have a symbiotic relationship; the coral protects the zooxanthellae, and in turn zooxanthellae provide the coral with food. These algae also produce sunscreen for the coral. Corals are animals and cannot photosynthesize, but zooxanthellae can. The waste product of their photosynthesis are sugars that feed the coral.

When ocean temperatures warm, however, corals become stressed, and there is a breakdown in the symbiosis. Warm temperatures speed up the zooxanthellae’s metabolism, causing it to produce a toxic compound. In response, the corals expel the algae and their sunscreen, leaving them open to harmful UV damage. Since these species get most of their coloring from the zooxanthellae, the expulsion causes the corals to “bleach,” or appear lighter in appearance–changing from dark hue to a paler hue.

Bleaching affects some corals’ ability to reproduce successfully. Upon expelling their zooxanthellae and, therefore, losing their UV protection, corals’ DNA is at greater risk of being damaged. Specifically, changes in their sperm cells’ mitochondria can affect their motility (ability to swim) for the long-term. If unable to successfully reproduce, corals cannot create novel offspring that may have genetic modifications that make them more resistant to warming and help them adapt to changing oceans.

Following the 2014 and 2015 bleaching events in Hawaii, the team observed that blue rice coral had exceptional reproductive vigor at 90% motility. Its brown-pigmented counterparts’ motility, on the other hand, was only half this amount. This suggests that even if brown corals survive bleaching and look visually healthy, the damage caused by bleaching and UV exposure could have long-lasting impacts on their ability to successfully reproduce. A key factor in the blue rice coral’s ability to reproduce successfully might be its sunscreen pigment, which the coral may retain even if it bleaches. By better understanding the role UV-protective pigments play in mitigating the adverse effects of climate change and warming oceans, scientists can piece together the picture of why some species are better equipped to survive and thrive in a changing environment than others.

The Smithsonian’s National Zoo and Conservation Biology Institute leads the Smithsonian’s global effort to save species, better understand ecosystems and train future generations of conservationists. As Washington, D.C.’s favorite destination for families, the Zoo connects visitors to amazing animals and the people working to save them. In Front Royal, Virginia, across the United States and in more than 30 countries worldwide, Smithsonian Conservation Biology Institute scientists and animal care experts tackle some of today’s most complex conservation challenges by applying and sharing what they learn about animal behavior and reproduction, ecology, genetics, migration and conservation sustainability to save wildlife and habitats.