Corals can survive in acidified ocean conditions, but have lower density skeletons 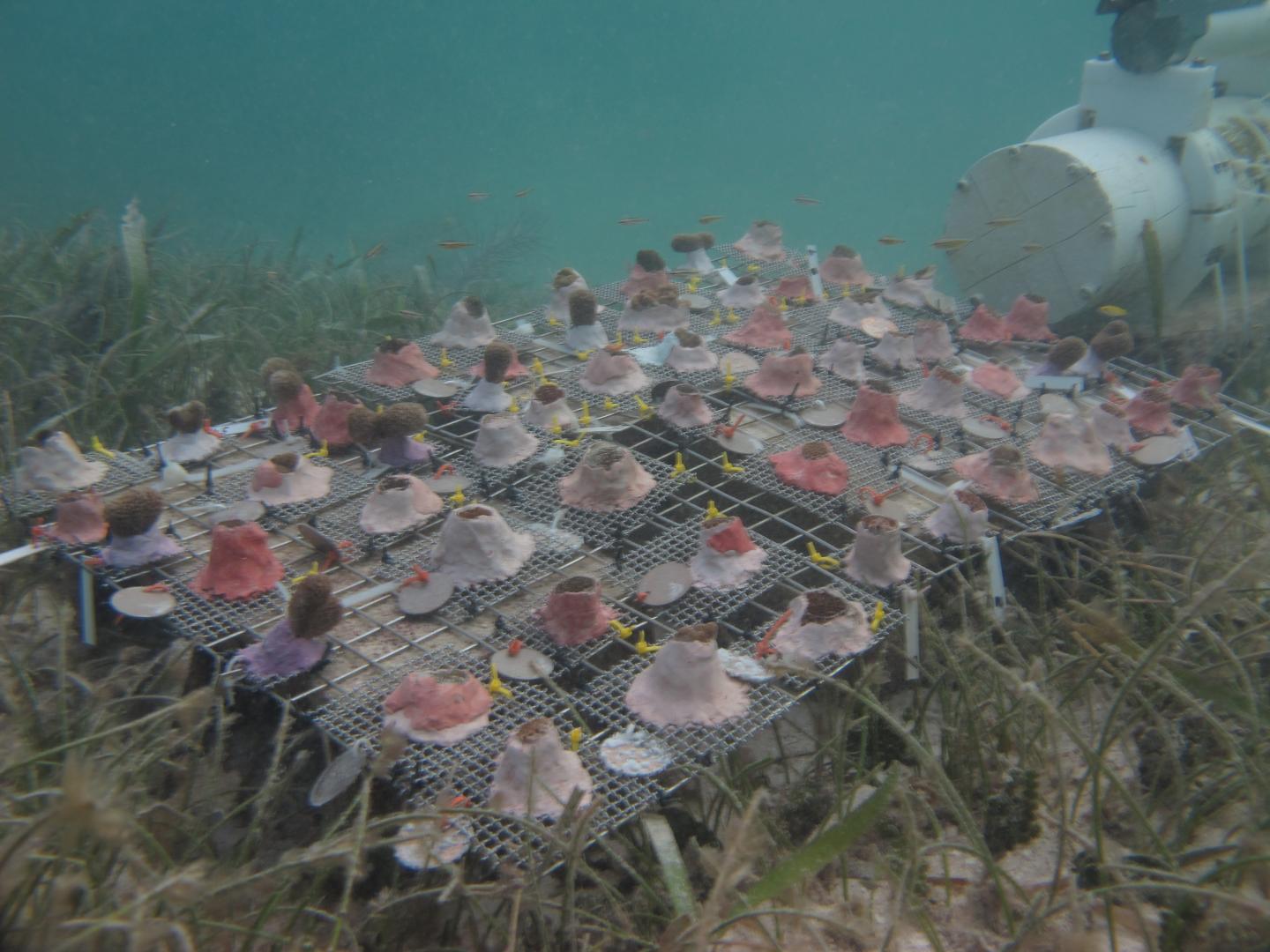 Coral reefs face many challenges to their survival, including the global acidification of seawater as a result of rising carbon dioxide levels in the atmosphere. A new study led by scientists at UC Santa Cruz shows that at least three Caribbean coral species can survive and grow under conditions of ocean acidification more severe than those expected to occur during this century, although the density of their skeletons was lower than normal.

The study took advantage of the unusual seawater chemistry found naturally at sites along the Caribbean coastline of Mexico’s Yucatan Peninsula, where water discharging from submarine springs has lower pH than the surrounding seawater, with reduced availability of the carbonate ions corals need to build their calcium carbonate skeletons.

In a two-year field experiment, the international team of researchers transplanted genetically identical fragments of three species of corals to a site affected by the springs and to a nearby control site not influenced by the springs, and then monitored the survival, growth rates, and other physiological traits of the transplants. They reported their findings in a paper published June 26 in Proceedings of the Royal Society B.

“The good news is the corals can survive and deposit calcium carbonate, but the density of their skeletons is reduced, which means the framework of the reef would be less robust and might be more susceptible to storm damage and bioerosion,” said Adina Paytan, a research professor at UCSC’s Institute of Marine Sciences and corresponding author of the paper.

Of the three species tested, the one that performed best in the low-pH conditions was Siderastrea siderea, commonly known as massive starlet coral, a slow-growing species that forms large dome-shaped structures. Another slow-growing dome-shaped species, Porites astreoides (mustard hill coral), did almost as well, although its survival rate was 20 percent lower. Both of these species outperformed the fast-growing branching coral Porites porites (finger coral).

Coauthor Donald Potts, professor of ecology and evolutionary biology at UC Santa Cruz, said the transplanted species are all widespread throughout the Caribbean. “The slow-growing, dome-shaped corals tend to be more tolerant of extreme conditions, and they are important in building up the permanent structure of the reef,” he said. “We found that they have the potential for persistence in acidified conditions.”

Corals will have to cope with more than ocean acidification, however. The increasing carbon dioxide level in the atmosphere is also driving climate change, resulting in warmer ocean temperatures and rising sea levels. Unusually warm temperatures can disrupt the symbiosis between coral polyps and the algae that live in them, leading to coral bleaching. And rapidly rising sea levels could leave slow-growing corals at depths where they would die from insufficient sunlight.

Nevertheless, Potts noted that several species of Caribbean corals have long fossil records showing that they have persisted through major changes in Earth’s history. “These are species with a history of survival and tolerance,” he said.

He added that both S. siderea and P. astreoides had higher chlorophyll concentrations at the low-pH site, indicating that their algal symbionts were responding positively and potentially increasing the energy resources available to the corals for resisting stress.

Both of the slow-growing species that did well under acidified conditions have internal fertilization and brood their larvae, so that their offspring have the potential to settle immediately in the same area, Potts said. “This means there is potential for local genetic adaptation over successive generations to changing environmental conditions,” he said.

The authors also noted that the differences among coral species in survival and calcification under acidified conditions could be useful information for reef restoration efforts and perhaps even for efforts to genetically modify corals to give them greater stress tolerance.

“These corals are more robust than we thought,” she said. “They have the potential to persist with ocean acidification, but it costs them energy to cope with it, so we have to do all we can to reduce other stressors, such as nutrient pollution and sedimentation.”

Paytan and Potts said the collaboration with Mexican researchers was essential to the success of the project, enabling frequent monitoring of the transplanted corals throughout the two-year experiment.

The first author of the paper, Ana Martinez, earned her Ph.D. at UC Santa Cruz in 2018. Other coauthors include Elizabeth Crook at UC Irvine (who also earned her Ph.D. at UCSC), Daniel Barshis at Old Dominion University, and Laura Hernandez and Mario Rebolledo-Vieyra at Universidad del Caribe in Cancun, Mexico. This research was funded by the National Geographic Society.

How to help patients recover after a stroke

Chewing versus sex in the duck-billed dinosaurs

New voyage to the universe from DESHIMA