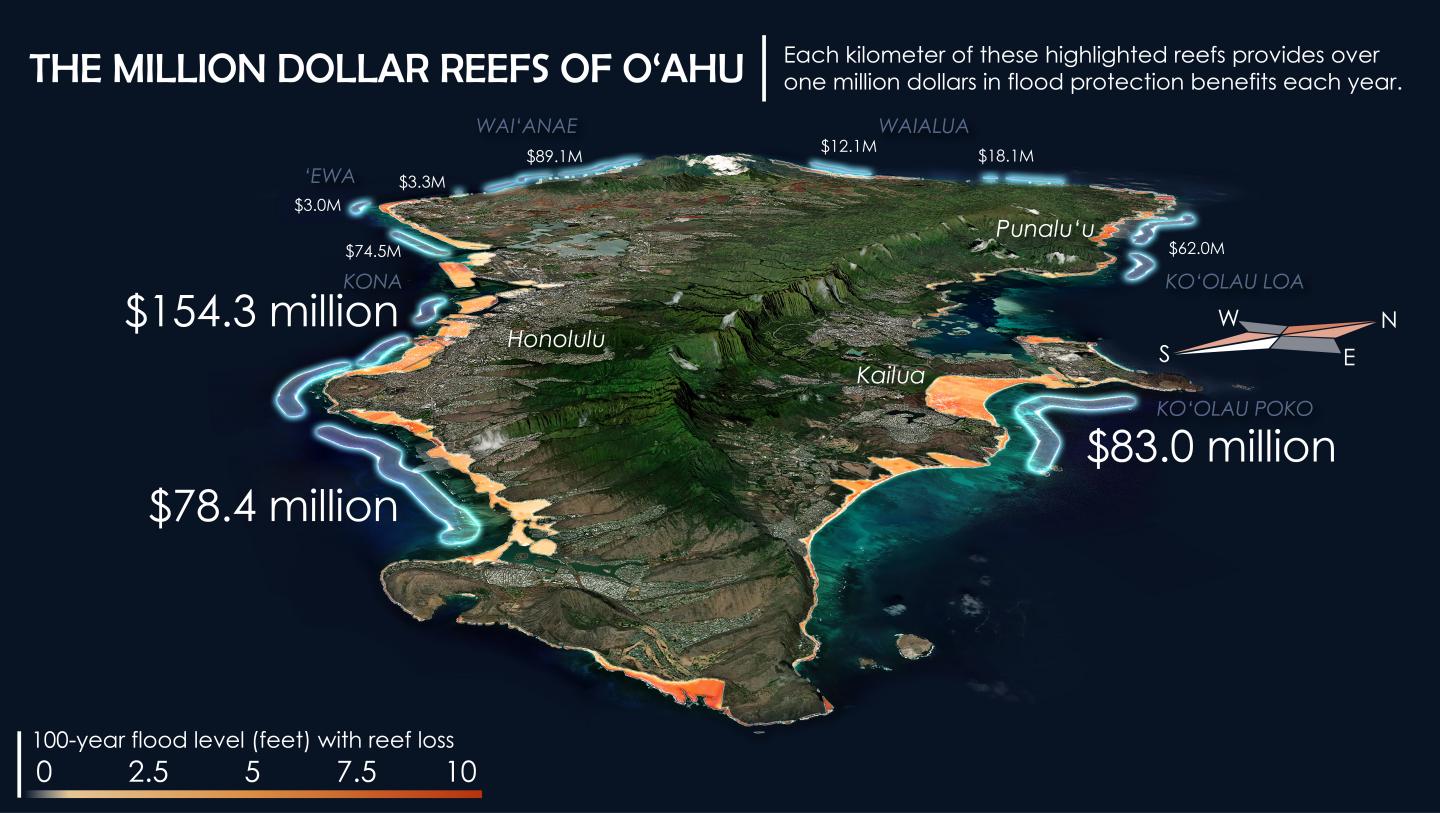 Coral reefs provide many services to coastal communities, including critical protection from flood damage. A new study led by researchers at the University of California, Santa Cruz, and the U.S. Geological Survey reveals how valuable coral reefs are in protecting people, structures, and economic activity in the United States from coastal flooding during storms.

Published April 15 in Nature Sustainability, the study found that coral reefs offer more than $1.8 billion in annual flood protection to coastal communities. Losing 1 meter of reef height would cause 100-year flooding zones to increase by 23%, impacting 53,800 more people (a 62% increase) and 90% more property and increasing damages by $5.3 billion.

“Valuing the flood risk-reduction service of existing ecosystems is one step toward managing them as natural infrastructure,” said lead author Borja Reguero, an associate researcher at UC Santa Cruz. “This study provides new local information on how reefs protect communities at the building-block level, while maintaining a national focus for policy purposes.”

The researchers combined computer models of storms and waves with engineering, ecological, mapping, social, and economic tools to create detailed and rigorous estimates of the value of coral reef defenses along U.S. coastlines. They analyzed flood risk and assessed reef benefits along the reef-lined coasts of Hawaii, Florida, Guam, American Samoa, Puerto Rico, the U.S. Virgin Islands, and the Commonwealth of the Northern Mariana Islands.

Information from the study is intended for use by a wide variety of coastal managers working on flood mitigation, coastal defense, transportation, and hurricane response and recovery.

The study also calculates how much critical infrastructure–such as hospitals, fire stations, roads, and power plants–coral reefs protect from coastal flooding. To produce these results, the researchers developed new computer models that can forecast flood damages with and without coral reefs all along the shoreline at very high resolution.

“Achieving this kind of definition required a complex modeling strategy to account for all the processes relevant in coral reef environments, which are significantly different to those driving flooding in other coastlines,” Reguero said. “The approach can also be applied to other ecosystems, and it now allows assessing the impacts of future changes in storms or sea level rise too.”

While sea level rise is a growing threat to coastal communities and economies, losing ecosystems like coral reefs can have comparable effects in much shorter timeframes. Reefs are in trouble across the U.S., but they can recover if resources are invested in their management and restoration, according to coauthor Michael Beck, who holds the AXA Chair in Coastal Resilience at UC Santa Cruz.

“This work quantifies the critical role of reefs in flood mitigation and provides the evidence needed to invest hazard management, disaster recovery, and insurance funds in these natural defenses,” Beck said. “We are glad to see that some of the key data and results from this work are already being used by the Federal Emergency Management Agency and the Nature Conservancy to inform reef restoration and new insurance options for reefs.”