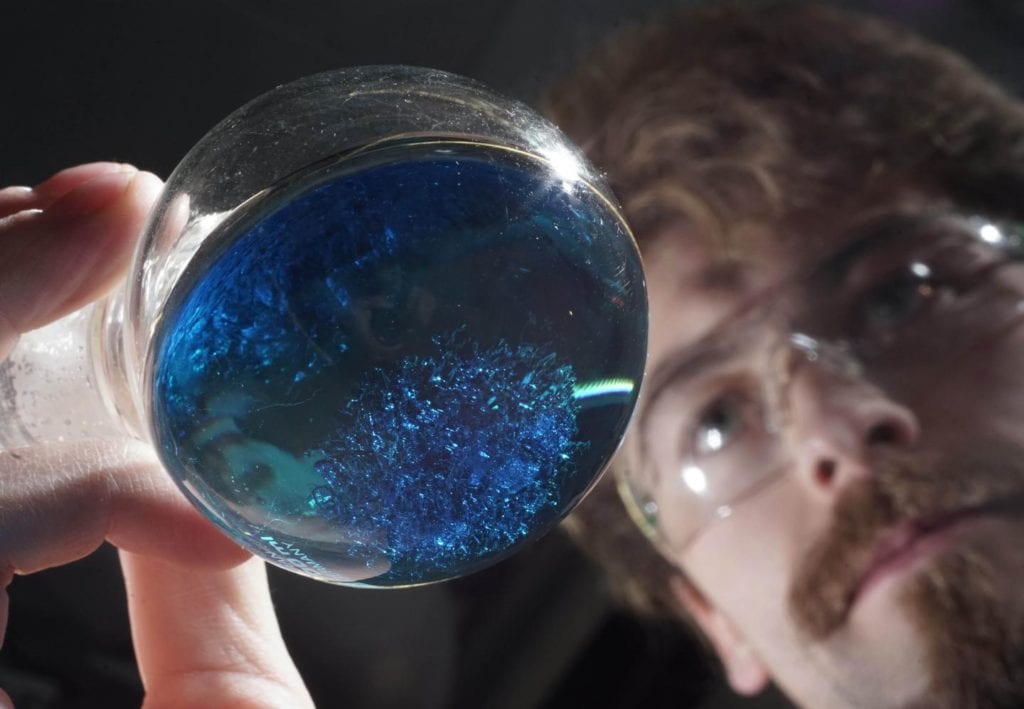 (Jena, Germany) Quantum computers could vastly increase the capabilities of IT systems, bringing major changes worldwide. However, there is still a long way to go before such a device can actually be constructed, because it has not yet been possible to transfer existing molecular concepts into technologies in a practical way. This has not kept researchers around the world away from developing and optimising new ideas for individual components. Chemists at Friedrich Schiller University in Jena (Germany) have now synthesised a molecule that can perform the function of a computing unit in a quantum computer. They report on their work in the current issue of the research journal Chemical Communications.

“To be able to use a molecule as a qubit – the basic unit of information in a quantum computer – it needs to have a sufficiently long-lived spin state, which can be manipulated from the outside,” explains Prof. Dr Winfried Plass of the Jena University. “That means that the state resulting from the interacting spins of the molecule’s electrons, that is to say the spin state, has to be stable enough so that one can enter and read out information.” The molecule created by Plass and his team meets precisely this condition.

This molecule is what is called a coordination compound, containing both organic and metallic parts. “The organic material forms a frame, in which the metal ions are positioned in a very specific fashion,” says Benjamin Kintzel, who played a leading role in producing the molecule. “In our case, this is a trinuclear copper complex. What is special about it is that within the molecule, the copper ions form a precise equilateral triangle.” Only in this way the electron spins of the three copper nuclei can interact so strongly that the molecule develops a spin state, which makes it a qubit that can be manipulated from the outside.

“Even though we already knew what our molecule should look like in theory, this synthesis is nevertheless quite a big challenge,” says Kintzel. “In particular, achieving the equilateral triangular positioning is difficult, as we had to crystallise the molecule in order to characterise it precisely. And it is hard to predict how such a particle will behave in the crystal.” However, with the use of various different chemical tools and fine-tuning procedures, the researchers succeeded in achieving the desired result.

According to theoretical predictions, the molecule created in Jena offers an additional fundamental advantage compared with other qubits. “The theoretical construction plan of our copper compound provides that its spin state can be controlled at the molecular level using electric fields,” notes Plass. “Up to now, magnetic fields have mainly been used, but with these you cannot focus on single molecules.” A research group in Oxford, UK, which is cooperating with the chemists from Jena, is currently conducting various experiments to study this characteristic of the molecule synthesised at the University of Jena.

The team of chemists in Jena is convinced that their molecule fulfils the requirements for being used as a qubit. However, it is difficult to foresee whether it really will have a future use as a computing unit. This is because it is not yet definitely known how molecules will actually be integrated into quantum computers. Chemical expertise is also needed to achieve this – and the experts in Jena are ready to face the challenge.

New approach towards an improved treatment of anxiety disorders

Scienmag Oct 24, 2019
Deformed Wing Virus, a leading cause of honey bee losses, has been found to be more genetically diverse than…