COPD, asthma now can be studied outside the body 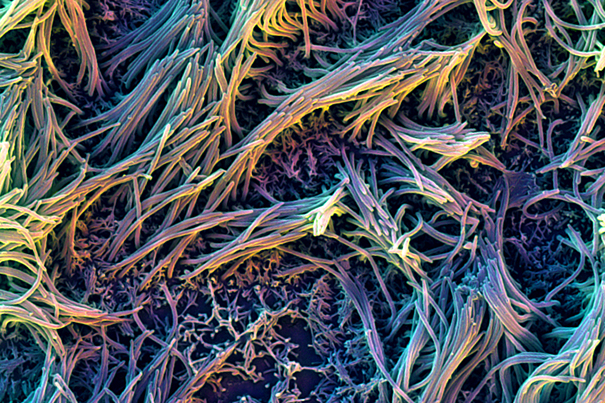 A research team at the Wyss Institute for Biologically Inspired Engineering at Harvard University leveraged its organ-on-a-chip technology to develop a model of the human small airway in which lung inflammatory diseases, such as asthma and chronic obstructive pulmonary disease (COPD), the third leading cause of mortality worldwide, can be studied outside the human body.

COPD and asthma are inflammatory reactions in the lung that can be dramatically exacerbated by viral and bacterial infections, as well as smoking. It is known that many of the associated disease processes occur in the conducting airway sections of the lung that shuttle air to and from the alveoli, or air sacs. However, much less is known about how inflammation induces distinct pathological processes such as the recruitment of circulating white blood cells and the buildup of mucus, which compromise the lungs of these patients, or how clinical exacerbations are triggered.

Development of new therapeutics for chronic lung diseases have been hindered by the inability to study them in vitro. To address this challenge, Wyss Institute researchers used their organ-on-a-chip technology to produce a microfluidic “human-lung-small-airway-on-a-chip.” Credit: Wyss Institute

“Inspired by our past work using the organ-on-a-chip approach to model the lung alveolus, we created a new microfluidic model of the lung small airway that recapitulates critical features of asthma and COPD with unprecedented fidelity and detail. Now, with this microengineered human lung small airway, we can study lung inflammatory diseases over several weeks in chips lined by cells from both normal donors and diseased patients to gain better insight into disease mechanisms, as well as screen for new therapeutics,” said Donald Ingber, the senior author on the work, who leads the multidisciplinary team of Wyss scientists that has been at the forefront of organ-on-a-chip technology. He is also the Wyss Institute’s founding director, the Judah Folkman Professor of Vascular Biology at Harvard Medical School and Boston Children’s Hospital, and professor of bioengineering at the Harvard John A. Paulson School of Engineering and Applied Sciences.

Demand for such opportunities is especially high since small-airway inflammation cannot be adequately studied in human patients or animal models and, to date, there are no effective therapies that can stop or reverse the complex and widespread inflammation-driven processes.

“To closely mimic the complex 3-D cellular architecture of actual human small airways, we designed a microfluidic device that contains a fully matured human small-airway epithelium with different specialized cell types exposed to air in one of its two parallel microchannels. The second channel is lined by a human vascular endothelium in which we flow medium containing white blood cells and nutrients so that the living microsystem can be maintained over weeks. We then modeled inflammatory asthma and COPD conditions by adding an asthma-inducing immune factor or by setting up the system with lung epithelial cells obtained from patients with COPD,” said Remi Villenave, a former postdoctoral fellow in Ingber’s group and the co-first author on the publication. In both cases, the team not only was able to observe highly disease- and cell-type-specific changes but could also exacerbate them with agents simulating viral or bacterial infection.

“This new organ-on-a-chip technology gives us a window on molecular-scale activities in the context of living human lung tissue. It also provides us with a handle to dissect contributions of specific cell types and biochemical factors to small-airway diseases, including how circulating immune cells are recruited to inflammation sites and how compromised cilia function contributes to abnormal mucus clearance in the lungs of diseased patients,” said Kambez Hajipouran Benam, a postdoctoral fellow working with Ingber who is the other co-first author of the study.

Finally, the team provided proof-of-principle that the synthetic small-airway-on-a-chip can be utilized as a discovery platform for disease-specific drugs and biomarkers. In collaboration with two industrial partners — Pfizer and Merck Research Laboratories, which also helped fund the project — and with support from the Defense Advanced Research Projects Agency (DARPA), the Wyss researchers showed that two drugs targeting different key molecular components of inflammatory pathways can potently suppress pathological processes in asthma and COPD-tailored small airway chips. The Wyss scientists also identified a macrophage-recruiting factor whose levels are raised by a viral mimic in the COPD model and which can be further investigated as a potential specific biomarker for viral exacerbations of COPD.

“This novel ability to build small-airway chips with cells from individual patients with diseases like COPD positions us and others now to investigate the effects of genetic variability, specific immune cell populations, pharmaceutical candidates, and even pandemic viruses in an entirely new and more personalized way, one that will hopefully increase the likelihood of success of future therapeutics,” said Ingber.