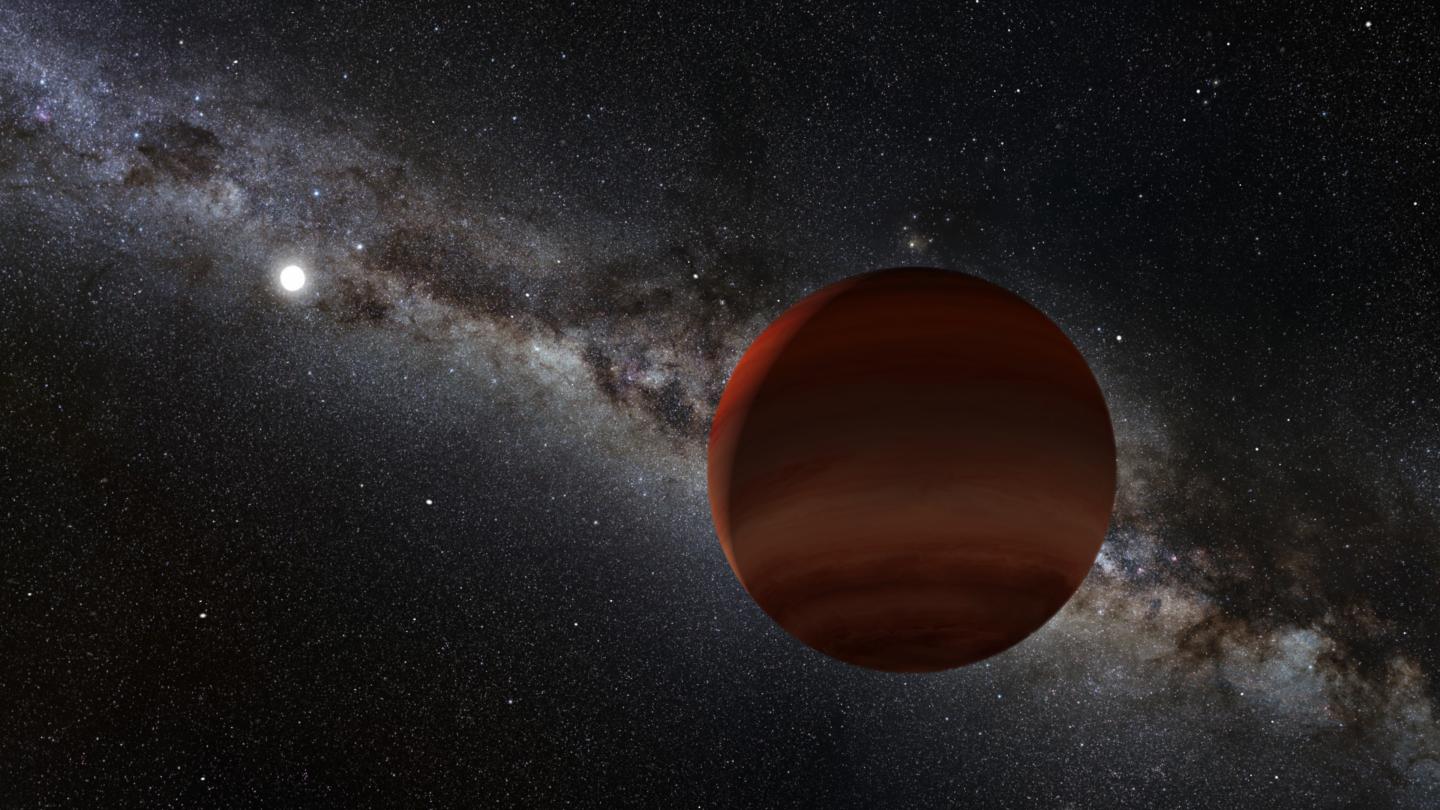 How complete is our census of the Sun’s closest neighbors? Astronomers using NSF’s NOIRLab facilities and a team of data-sleuthing volunteers participating in Backyard Worlds: Planet 9, a citizen science project, have discovered roughly 100 cool worlds near the Sun — objects more massive than planets but lighter than stars, known as brown dwarfs. Several of these newly discovered worlds are among the very coolest known, with a few approaching the temperature of Earth — cool enough to harbor water clouds.

Discovering and characterizing astronomical objects near the Sun is fundamental to our understanding of our place in, and the history of, the Universe. Yet astronomers are still unearthing new residents of the Solar neighborhood. A remarkable breakthrough was announced today, with the discovery of roughly 100 cool brown dwarfs near the Sun [1]. The new Backyard Worlds discoveries bridge a previously empty gap in the range of low-temperature brown dwarfs, identifying a long-sought missing link within the brown dwarf population.

“These cool worlds offer the opportunity for new insights into the formation and atmospheres of planets beyond the Solar System,” said Aaron Meisner from the National Science Foundation’s NOIRLab and the lead author of the research paper. “This collection of cool brown dwarfs also allows us to accurately estimate the number of free-floating worlds roaming interstellar space near the Sun.”

This major advancement was made possible with archival data from the Nicholas U. Mayall 4-meter Telescope at Kitt Peak National Observatory (KPNO) and the Víctor M. Blanco 4-meter Telescope at Cerro Tololo Inter-American Observatory (CTIO), which were made available through the Community Science and Data Center (CSDC), all programs of NSF’s NOIRLab. Large survey data sets were then made available to the Backyard Worlds volunteers using NOIRLab’s Astro Data Lab science platform. The results, to be published in TheAstrophysical Journal, demonstrate the rapidly growing role of survey and archival data research in astronomy today.

Brown dwarfs lie somewhere between the most massive planets and the smallest stars. Lacking the mass needed to sustain nuclear reactions in their core, brown dwarfs resemble cooling embers. Their low mass, low temperature and lack of internal nuclear reactions make them extremely faint — and therefore extremely difficult to detect. Because of this, when searching for the very coolest brown dwarfs, astronomers can only hope to detect such objects relatively close to the Sun.

To help find our Sun’s coldest and nearest neighbors, the astronomers of the Backyard Worlds project turned to a worldwide network of more than 100,000 citizen scientists [2]. These volunteers diligently inspect trillions of pixels of telescope images to identify the subtle movements of brown dwarfs and planets. Despite the abilities of machine learning and supercomputers, there’s no substitute for the human eye when it comes to scouring telescope images for moving objects.

The keen eyes of the Backyard Worlds volunteers have already discovered more than 1,500 cold worlds near to the Sun, and today’s paper presents roughly 100 of the coldest in that sample. According to Meisner, this is a record for any citizen science program by a factor of about 20, and 20 citizen scientists are listed as co-authors of the study. A handful of these cool worlds — which are among the very coldest brown dwarfs known — approach the temperature of Earth. NASA’s Spitzer Space Telescope provided the brown dwarf temperature estimates [3].

Brown dwarfs are expected to cool as they age, passing from near-stellar temperatures down to planetary temperatures and below, fading all the while and eventually winking out. The new discoveries attest to this picture by uncovering elusive examples of brown dwarfs approaching Earth-temperature.

“This paper is evidence that the solar neighborhood is still uncharted territory and citizen scientists are excellent astronomical cartographers,” said co-author Jackie Faherty of the American Museum of Natural History. “Mapping the coldest brown dwarfs down to the lowest masses gives us key insights into the low-mass star formation process while providing a target list for detailed studies of the atmospheres of Jupiter analogs.”

Citizen scientist, Astro Data Lab user, and paper co-author Jim Walla added, “It’s awesome to know that our discoveries are now counted among the Sun’s neighbors and will be targets of further research.”

In addition to Astro Data Lab’s making data accessible to the Backyard Worlds collaboration, archival observations by telescopes at two other NOIRLab Programs — CTIO and KPNO — were also key to this discovery. “Wide-area imaging from NOIRLab’s Mayall and Blanco telescopes was also critical,” explained Aaron Meisner. “To select only the very coldest brown dwarfs, we inspected deep images from a variety of sensitive astronomical surveys.”

“It’s great to see such thrilling results from NOIRLab’s efforts to broaden participation in astronomy research,” said Chris Davis of the National Science Foundation, the US agency that supports operations at the Kitt Peak and Cerro Tololo observatories and at CSDC. “By making archival data from NSF’s Mayall and Blanco telescopes publicly available and easily accessible through CSDC, folks with a fascination for astronomy can make a real contribution to science and to our understanding of the Universe.”

The approach of the Backyard Worlds project — searching for rare objects in large data sets — is also one of the goals for the upcoming Vera C. Rubin Observatory [4]. Currently under construction on Cerro Pachón in the Chilean Andes, Rubin Observatory will image the visible sky from the southern hemisphere every three nights over ten years, providing a vast amount of data that will enable new ways of doing astrophysical research.

“Vast modern data sets can unlock landmark discoveries, and it’s exciting that these could be spotted first by a citizen scientist,” concludes Aaron Meisner. “These Backyard Worlds discoveries show that members of the public can play an important role in reshaping our scientific understanding of our solar neighborhood.”

[1] The closest of these new discoveries is roughly 23 light-years away from the Sun. Many more of these brown dwarfs are in the 30-60 light-year distance range.

This research was presented in the paper Spitzer Follow-up of Extremely Cold Brown Dwarfs Discovered by the Backyard Worlds: Planet 9 Citizen Science Project to appear in The Astrophysical Journal.

NSF’s National Optical-Infrared Astronomy Research Laboratory (NOIRLab), the US center for ground-based optical-infrared astronomy, operates the international Gemini Observatory (a facility of NSF, NRC-Canada, ANID-Chile, MCTIC-Brazil, MINCyT-Argentina, and KASI-Republic of Korea), Kitt Peak National Observatory (KPNO), Cerro Tololo Inter-American Observatory (CTIO), the Community Science and Data Center (CSDC), and the Vera C. Rubin Observatory. It is managed by the Association of Universities for Research in Astronomy (AURA) under a cooperative agreement with NSF and is headquartered in Tucson, Arizona. The astronomical community is honored to have the opportunity to conduct astronomical research on Iolkam Du’ag (Kitt Peak) in Arizona, on Maunakea in Hawaiʻi, and on Cerro Tololo and Cerro Pachón in Chile. We recognize and acknowledge the very significant cultural role and reverence that these sites have to the Tohono O’odham Nation, to the Native Hawaiian community, and to the local communities in Chile, respectively.