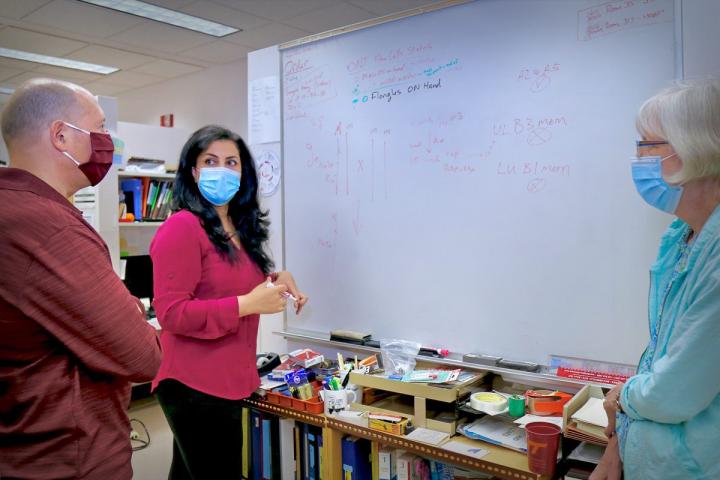 Male mosquitoes do not bite and are unable to transmit pathogens to humans. Female mosquitoes, on the other hand, are able to bite.

Female Aedes aegypti mosquitoes require blood to produce eggs, making them the prime carriers of the pathogens that cause Zika and dengue fever in humans.

“The presence of a male-determining locus (M locus) establishes the male sex in Aedes aegypti and the M locus is only inherited by the male offspring, much like the human Y chromosome,” said Zhijian Tu, a professor in the Department of Biochemistry in the College of Agriculture and Life Sciences.

“By inserting Nix, a previously discovered male-determining gene in the M locus of Aedes aegypti, into a chromosomal region that can be inherited by females, we showed that Nix alone was sufficient to convert females to fertile males. This may have implications for developing future mosquito control techniques.”

These findings were published in the Proceedings of the National Academy of Sciences.

“We also discovered that a second gene, named myo-sex, was needed for male flight. This work sheds light into the molecular basis of the function of the M locus, which contains at least 30 genes,” said Azadeh Aryan, a research scientist in Tu’s lab and the first author on the paper.

Aryan and colleagues generated and characterized multiple transgenic mosquito lines that expressed an extra copy of the Nix gene under the control of its own promoter. Maria Sharakhova, an assistant professor of entomology in the College of Agriculture and Life Sciences, and Anastasia Naumencko, a former graduate research assistant, mapped the chromosomal insertion site of the extra copy of Nix.

The Virginia Tech team, in collaboration with Zach Adelman’s lab in the Department of Entomology at Texas A&M University and Chunhong Mao of the Biocomplexity Institute & Initiative at the University of Virginia, found that the Nix transgene alone, even without the M locus, was sufficient to convert females into males with male-specific sexually dimorphic features and male-like gene expression.

“Nix-mediated sex conversion was found to be highly penetrant and stable over many generations in the laboratory, meaning that these characteristics will be inherited for generations to come,” said Michelle Anderson, a former member of the Adelman and Tu labs and currently a senior research scientist at the Pirbright Institute in the United Kingdom.

Although the Nix gene was able to convert the females into males, the converted males could not fly as they did not inherit the myo-sex gene, which is also located in the M locus.

“Nix has great potential for developing mosquito control strategies to reduce vector populations through female-to-male sex conversion, or to aid in the Sterile Insect Technique, which requires releasing only nonbiting males,” said James Biedler, a research scientist in the Tu lab.

Genetic methods that rely on mating to control mosquitoes target only one specific species. In this case, the Tu team is targeting Aedes aegypti, a species that invaded the Americas a few hundred years ago and poses a threat to humans.

However, more research is needed before potentially useful transgenic lines can be generated for initial testing in laboratory cages. “One of the challenges is to produce transgenic lines that convert females into fertile, flying male mosquitoes by inserting both the Nix and myo-sex genes into their genome together,” said Adelman.

As the Tu team looks to the near future, they wish to explore the mechanism by which the Nix gene activates the male developmental pathway. The team is also interested in learning about how it evolves within mosquito species of the same genus.

“We have found that the Nix gene is present in other Aedes mosquitoes. The question is: how did this gene and the sex-determining locus evolve in mosquitoes?” said Tu, who is also an affiliated faculty member of the Fralin Life Sciences Institute.

In addition to diving into the depths of the Nix gene in mosquitoes, researchers hope that these findings will inform future investigations into homomorphic sex chromosomes that are found in other insects, vertebrates, and plants.

Yumin Qi, a research scientist at Virginia Tech, and Justin Overcash, a former graduate student at both Virginia Tech and Texas A&M University, also contributed to this research.

Tags: BiologyBiotechnologyDisease in the Developing WorldEntomologyGeneticsMicrobiology
Share25Tweet16Share4ShareSendShare
ADVERTISEMENT
No Result
View All Result