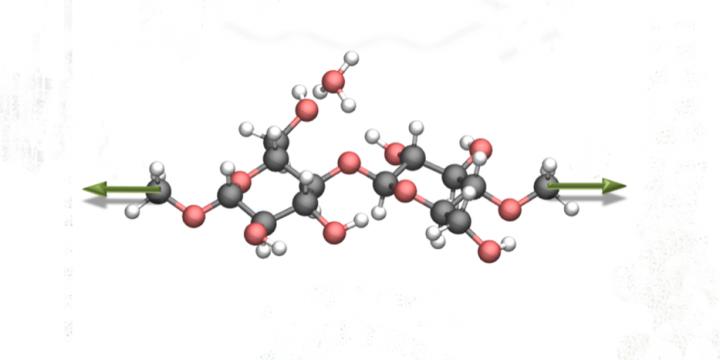 One of the greatest global challenges is the efficient use of renewable sources in order to meet the increasing demand for energy and feedstock chemicals in the future. In this context, biomass is a promising alternative to existing fossil sources such as coal or oil. Cellulose plays a decisive role here because it accounts for the largest fraction of the natural carbon storage. These reservoirs are crucial for the production of both fuels and basic chemicals. In order to utilize its full potential, the chain-like structure of cellulose must be broken up. This can be done by a so-called hydrolysis reaction, which, however, is difficult due to the atomic structure of cellulose and has been very costly so far.

Researchers at the University of Münster (Germany) headed by Dr. Saeed Amirjalayer and Prof. Harald Fuchs and and the University of Bochum headed by Prof. Dominik Marx have now succeeded in identifying a new reaction mechanism in which cellulose can be converted highly efficiently using mechanical force. This so-called mechano-catalytic reaction could lead to the development of an efficient, environmentally friendly and cost-effective process for the conversion of biomass. The study has been published in the journal Angewandte Chemie International Edition.

Using a hydrolysis reaction, the cellulose backbone can be broken down into individual molecular building block. These molecular building blocks are the actual basis for producing fuels or chemical feedstocks. In their search for ways to make the hydrolysis reaction more efficient, researchers have already found evidence in earlier studies that mechanical forces can influence the process of conversion.

So-far it has not been possible to elucidate the influence of mechanical force during each individual reaction step at the atomic level. However, this level of insight is needed to develop a corresponding efficient and resource-efficient process. In the now published work, the scientists show that the use of mechanical force on the cellulose molecules, over a certain level, has a significant influence on the reaction.

To do so, the nanoscientists carried out so-called atomistic modelling. These enabled them to follow the individual steps of the hydrolysis reaction in detail and at the same time to apply a mechanical force on the molecular structure. The researchers calculated so-called energy profiles, which describe the energy pathway along the reaction coordinate with and without the influence of mechanical forces. What they succeeded to show is that stressing the molecular backbone of the cellulose had a strong influence on the hydrolysis reaction. On the one hand, the energy required to activate the process was significantly reduced. On the other hand, an increased mechanical force even made two of the usual three reaction steps superfluous. “By means of our atomistic models we could explicitly investigate the influence of mechanical force on the reaction mechanism”, says leading author Dr. Saeed Amirjalayer, who works as a group leader at the Institute of Physics at Münster University and at the Center for Nanotechnology (CeNTech). “This enabled us to elucidate a previously unknown and highly efficient reaction pathway for the conversion of cellulose,” he adds.

The new results not only confirm the experimental observations, but also show the potential to control molecular processes with the help of mechanical force. “Among other things, we were able to show that the so-called proton affinity in cellulose can be increased region-selectively by mechanical force,” Saeed Amirjalayer explains.

The scientists therefore hope that this work will not only enable an efficient and environmentally friendly process for the conversion of cellulose, but also lead to the development of novel mechano-responsive substances, such as plastics. These substances could be easily recycled by mechanical forces after usage.

Urban beaches are environmental hotspots for antibiotic resistance after rainfall

Scienmag Oct 1, 2019
Stormwater, sewage and urban waste-stream infrastructure, such as pipes, are potential reservoirs and channels for…

Machine learning at the quantum lab